Climate Campaign Tipping Point? Unions Get on Board 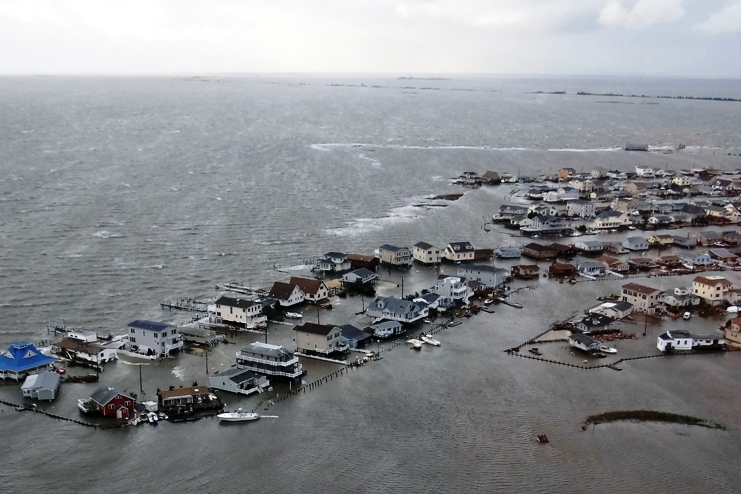 Houses in Tuckerton, New Jersey, were flooded by Hurricane Sandy in 2012. Since the storm, area unions have been educating members about climate change. Photo: Boston.com.

A major climate change march in New York September 21 may be a tipping point for labor movement participation in global warming activism.

Climate initiatives are still controversial in the labor movement. But dozens of unions in New York, jarred by memories of Superstorm Sandy, have lined up to join the People’s Climate March, planned to coincide with a United Nations summit that will draw world leaders to the city.

“Let’s be clear, climate change is the most important issue facing all of us for the rest of our lives,” said John Harrity, president of the Connecticut State Council of Machinists, which endorsed the march.

“Climate protection is the single most essential issue for us now,” said J.J. Johnson, a Service Employees (SEIU) 1199 retiree, at a June union planning meeting.

The U.N. meeting “provides us an unusual opportunity,” Johnson said. “There is no way that we should fritter this away.”

With 400,000 members and 85,000 retirees, 1199 is among the biggest unions to sign up so far. Others are AFSCME’s District Council 37 and the New York State Nurses Association.

Members of NYSNA have direct experience with climate catastrophes. They’ve volunteered help in New Orleans after Hurricane Katrina, in the Philippines after Typhoon Haiyan, and close to home in devastated communities on Staten Island and in the Rockaways after Sandy.

They also experienced crises in their own hospitals when Sandy hit. Some evacuated patients down darkened stairwells, as flooded backup power systems failed.

To engage members, he said, NYSNA has been holding lunch and dinner meetings at hospitals, with the goal of hitting the dozen city hospitals it represents.

“We know we have members who care about public health and their patients with asthma, members who volunteered to do relief…members already involved in environmental issues,” said Petty. “We don’t know that all those members have made the connections between Sandy and climate change, between asthma and climate change.”

They also don’t necessarily yet see their union as a key place to start organizing on the issue. “That’s the goal of the educational sessions,” Petty said.

People trust nurses. That and the resources their unions can deploy are two reasons they’re well positioned to help create pressure to change climate policy. National Nurses United has made climate change a signature issue, framing it as a public health responsibility.

The NYSNA sessions pair information about climate change generally with testimony from members who have done relief work or can talk about the health impacts.

Johnson too said local issues are striking a chord. In the South Bronx, 50,000 1199 family members have asthma, he said. “That is a basic climate protection issue.”

According to the federal government’s recent National Climate Assessment, asthma is expected to worsen in New York as ground-level ozone increases—a result of the warming climate.

The AFL-CIO hasn't taken a position on the September march yet, but that hasn’t stopped unions from signing on. The BlueGreen Alliance, a union-led environmental and jobs coalition that didn't take a position on Keystone XL has agreed to participate in this march.

Four years ago, 32BJ launched a new class to train “green supers.” More than 2,000 union members have gone through the program, where they get 40 hours of training to make the building systems they operate and maintain more efficient, including lighting, heat, air-conditioning, insulation, and gas and water use. Landlords like it because it can save energy costs.

Participants also learn about global warming. They learn that buildings account for 70 percent of New York City’s greenhouse gases, and develop an action plan for their own buildings.

Like 32BJ, IBEW Local 3 has lots of training infrastructure, said Partha Banerjee, who teaches at the local.

This year the union has incorporated a climate change discussion into its “critical thinking workshops,” trainings held every weekend at a union-built resort on Long Island. Around 1,500 workers participate each year.

In his experience teaching members about climate change, “people do not know exactly what is going on, or don’t understand the extent of it,” Banerjee said.

The class discusses issues and problems in the morning, and talks about solutions in the afternoon. “It’s not traditional teaching; it’s very interactive,” he said. “Members ask a lot of questions and come up with answers.”

The jobs vs. environment question naturally comes up.

“Local 3 has taken a big lead in solar projects and restoration projects. Members know about that and can relate very well to non-traditional energy,” Banerjee said. “Instead of talking about climate change’s impact on traditional jobs, we talk about how there has to be a serious priority on green jobs.”

Naturally, the resort is solar-powered.

Most unions haven’t grappled with climate change at all, while a few have been vocal on each side of the debate.

Four building trades unions that hoped to gain jobs building the Keystone XL pipeline excoriated the two national transit unions for coming out against it two years ago.

Climate activists oppose it because they say it would accelerate distribution of carbon-intensive tar sands oil from Canada. The pipeline hasn’t been approved.

Meanwhile, the Mineworkers are organizing a July 31 rally in Pittsburgh against an important new Obama administration initiative to cut greenhouse gases from coal-fired power plants.

New power plants are already regulated, but climate activists have been pushing the administration to crack down on existing coal plants, which are responsible for about 40 percent of U.S. carbon pollution. The proposed Environmental Protection Agency regulations would make plants cut those emissions 30 percent by 2030.

Mineworkers say this will reduce use of coal and eliminate more mining jobs. “Our members want to know what lies in the future for their families and their communities, but so far the EPA has no answers,” said Mineworkers president Cecil Roberts.

However, coal jobs in Appalachia, where most unionized miners work, have been declining even without the regulations. Many profitable seams in the East are mined out. Shallow Western mines, requiring fewer workers, have become the main source of easy coal.

The Mineworkers charge that the new regulations single them out to bear a burden everyone should share. “Climate change is a global problem,” Roberts said. “It demands a global solution, not one that punishes American coal miners and their families.”

But climate activists say the U.S. has led the resistance to regulations at every climate summit. If it starts to act responsibly, other countries will be encouraged to follow.

The jobs argument for doing nothing is looking increasingly anemic, as ideas fly for remaking the economy with clean energy.

“Here’s a banner I know you’ll see in the streets of New York,” wrote climate campaigner Bill McKibben in a Rolling Stone article inviting everyone to the September march: “CLIMATE/JOBS. TWO CRISES, ONE SOLUTION.”

Transit jobs, of course, could grow if public investment moves to expanding bus and rail travel rather than subsidizing fossil fuel production. But utility and construction workers, too, may see more jobs as power plants and buildings retrofit.

New energy sectors created by the buying power of the federal government could add jobs too, although it will be up to workers to demand the pay and protections that mineworkers established over a century of struggle.

In Kentucky, where mining jobs have declined from 48,000 to 18,000 over the last 30 years, activists are promoting state energy policies that would create new jobs manufacturing wind turbines and solar panels. They point to 70,000 jobs in Ohio and 12,500 in North Carolina created due to state policies encouraging renewables.

For more information on the People’s Climate March, go to peoplesclimate.org.

A version of this article appeared in Labor Notes #425, August 2014. Don't miss an issue, subscribe today.

Another march, the Great March for Climate Action, began March 1 from the refineries of south LA and will arrive in DC on November 1. We will be passing through Illinois-Indiana-Ohio in September, but will pause the march to bus ahead and join the People's Climate March. Looking forward to seeing all of you there as the longest climate march in history meets the largest! http://climatemarch.org/

The People's Climate March, mentioned in this article, will be preceded, on Sept. 19 and 20, by the NYC Climate Convergence, a more openly radical event, organized by System Change not Climate Change and the Global Climate Convergence. For more on the events in NYC in September, see this article:
http://www.solidarity-us.org/site/node/4219