'You Can Rebuild a Post Office, But Not a Life': Minneapolis Postal Workers March from Burned Post Office in Solidarity with Protests 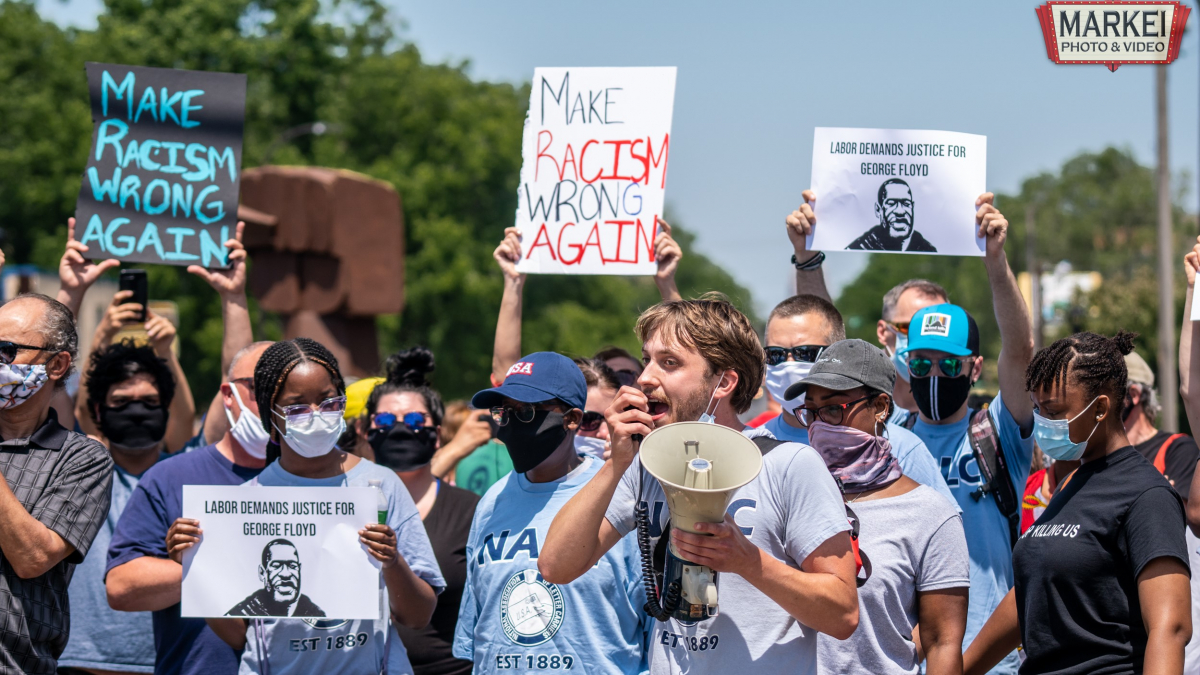 'We thought it was important to show the world where we stood, because city hall and Governor Tim Walz have used the destruction of buildings—including two post offices—as a justification to mobilize the National Guard.' Photo: Marie LePage of MarKei Photo & Video.

On Sunday postal workers in Minneapolis organized a display of solidarity with the Black freedom movement that is emerging after the brutal police murder of George Floyd.

A few co-workers and I planned a rally at the burned-out Lake Street post office and a march from there to the memorial site for Floyd. We thought it was important to show the world where we stood, because city hall and Governor Tim Walz have used the destruction of buildings—including two post offices—as a justification to mobilize the National Guard to suppress the protests.

From day one, the Minneapolis Police Department has responded to nonviolent protests by using rubber bullets, mace, and tear gas. They’re the ones who provoked the destruction of various buildings in South Minneapolis.

We started the march with 40 postal workers behind the banner “Postal Workers Demand Justice for George Floyd” and around 100 community supporters. Along the way, people on the street and in their front yards joined us. By the time we reached the memorial we were 300 strong.

The memorial, where Floyd was killed, was originally the site of major and emotional protests. Now the atmosphere there has transformed into a block party festival. People were cooking food and distributing donated supplies such as diapers. When our group arrived chanting, people gathered around in big circle to hear us speak.

Standing in front of the corner store where an employee had called the police to allege that Floyd had used a counterfeit $20 bill, leading to his death, postal worker Delisha Browning connected the dots between the shortage of good jobs and the way that Black people are viewed with suspicion as potential criminals. “There’s plenty of brothers and sisters right now who would not be in the stores being victims of the police if they had a good job,” she said. “It starts with equality, and it starts with the racial injustice in this America.

“This is us against them,” said Browning, a member of Postal Workers (APWU) Local 7019. “And when I say us, it means the working class against the rich, against the billionaires!” That got a big cheer from the crowd.

The local affiliates of CBS and Fox covered our rally and march that night and the next morning on primetime news. CNN interviewed us live, and a local weekly paper did an interview too.

EVERYONE WAS TALKING ABOUT IT

Rank and filers on the shop floor organized this action. My co-workers and I talk when we’re loading the trucks every morning before we go on our routes. Everyone was talking about the movement.

I was inspired by the work of our union siblings who drive buses, members of Transit (ATU) Local 1005. They refused to take protestors to jail and to cart riot police around the protests. One of them also wrote a petition for union members. Initially I sent that petition to my co-workers, and I was surprised by how much support there was. So we talked about doing something ourselves.

Response to the plan for a rally at the burned post office was overwhelmingly positive. Many of us spend our days delivering mail in working-class communities and communities of color, where we routinely witness police brutality and harassment. The postal service is a very diverse workforce; many of my co-workers are Black and experience racism regularly. Like many people in Minneapolis, we were outraged but not surprised by George Floyd’s murder.

Many of my co-workers had already attended the massive protests, but they felt like we needed to do something as a group to show solidarity with the communities we serve. We wanted to show how we felt: that we could always rebuild a post office, but we can never rebuild the life of someone murdered by the police.

Once we got the ball rolling, we reached out to other post offices. We were able to get our action endorsed by the executive board of my local union, Letter Carriers (NALC) Branch 9. A handful of APWU members participated in the action too.

DON’T STOP AT THE CONTRACT

Right now, the postal service is under attack by Trump, Congress, and billionaire investors who want to make a profit off the mail. We need to fight back, but we can’t do it alone. We want people to stand with us—but for that to happen, we need to show that we’re willing to stand with them too. Solidarity is the strongest weapon we have.

Right now, eight billionaire men control as much wealth as the poorest half of the world’s population. Climate change is an existential threat to humanity. Racism is alive and well in America, and it can kill you.

Tyler Vasseur is a letter carrier and NALC Branch 9 member.

Related
How We Began To Bring the Mail Back »
Viewpoint: Support Veterans by Defending, Not Defunding, Public Sector Jobs at the Post Office and the V.A. »
Florida Letter Carriers Won Back Our Sunday Breaks with Direct Action »
‘Direct Action Revitalized Our Union’: New Canadian Postal Veep Has a Plan to Revive Militancy Coast to Coast »
When Workers Swapped Segregation for Solidarity »