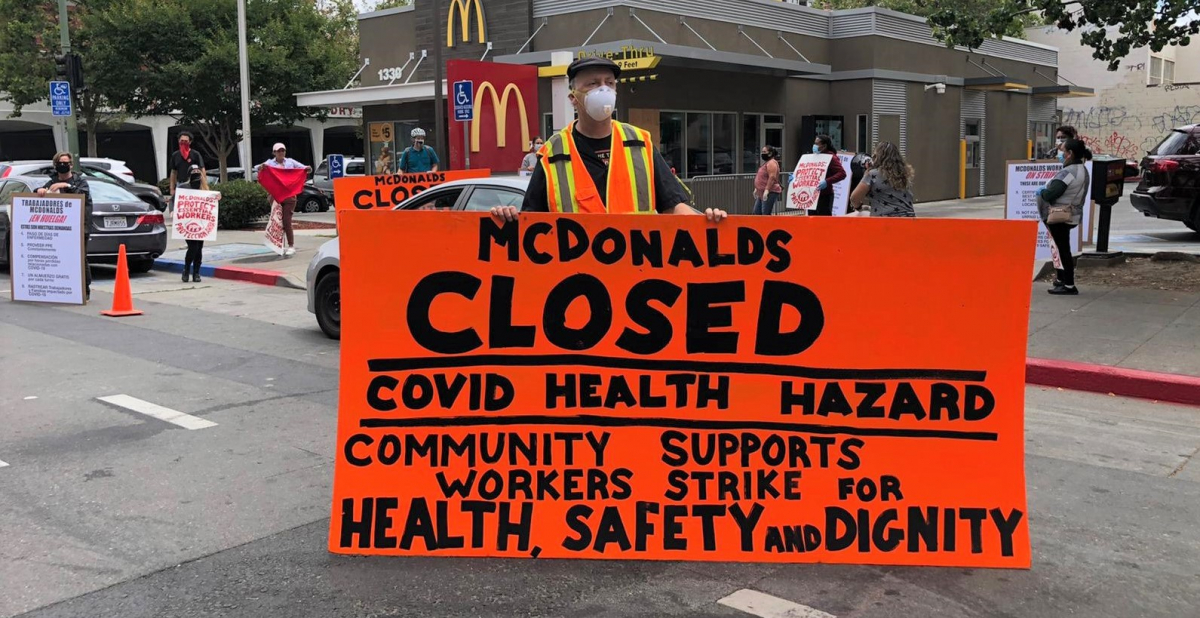 Thirty-three workers at an Oakland McDonald's have been on strike for nearly three weeks, as COVID-19 spreads from store to store and management refuses paid sick leave or proper protections. Photo: Kaela Sanborn-Hum.

A strike by 33 workers at a McDonald’s in North Oakland has shut down the store since May 26. Twelve workers there have tested positive for COVID-19, and so have eight of their family members, including a 10-month-old baby. This is one of the longest recorded strikes ever by McDonald's workers.

Before the strike, Fight for $15 organizers say, management gave workers dog diapers and rubber bands and instructed them to construct masks. Coffee filters were also offered as personal protective equipment when other supplies had run out.

“McDonald’s is treating us like dogs,” said worker Delia Vargas. “We don’t want to die for their hamburgers so we are going on strike to protect ourselves, our families, and our communities.”

Faith leaders, community allies including members of East Bay Democratic Socialists (DSA), and Fight for $15 organizers gathered June 10 for a protest outside the store. This was a community-led action conceived by artist David Solnit.

Attendees held up 33 silhouettes each representing one of the striking workers. Quotes from the workers were painted on the silhouettes, including “We are not dogs.”

Angeli Rodriguez, a worker who tested positive, called in remotely and addressed the crowd: “I tested positive for COVID-19 while working at this location. Like all my co-workers, I need to work and support my family in Honduras. We are on strike not because we don’t want to work, but because we are demanding safe working conditions...

“Until today the owner of this franchise has ignored our demands. We have been asking at least twice [for him] to meet with us. He didn’t close the store when he had to, that’s why 33 of us joined the strike.”

Two days later McDonald’s workers and community allies showed up again outside the store. Fifteen strikers arrived to confront the franchise owner, Michael Smith. They repeatedly knocked on the door and requested to meet with him to discuss their demands. Smith refused.

After Smith refused to meet, McDonald’s worker Sandra Roman announced a spontaneous plan to disrupt the lunch rush at a different store in the Smith franchise.

Seven workers blocked the drive-thru to a McDonald’s in downtown Oakland. Uber Eats and other delivery-service drivers were turned away as the workers held signs and chanted, “Strike! Strike! Strike! Organizing is a right.”

Since last week the outbreak has spread to another East Bay McDonald’s, where a sick manager from the Oakland store also worked. An additional seven workers have tested positive at that store, in Berkeley, according to a statement from Fight for $15.

The workers are demanding:

Kaela Sanborn-Hum is a member of East Bay DSA and former organizer with Fight for $15.