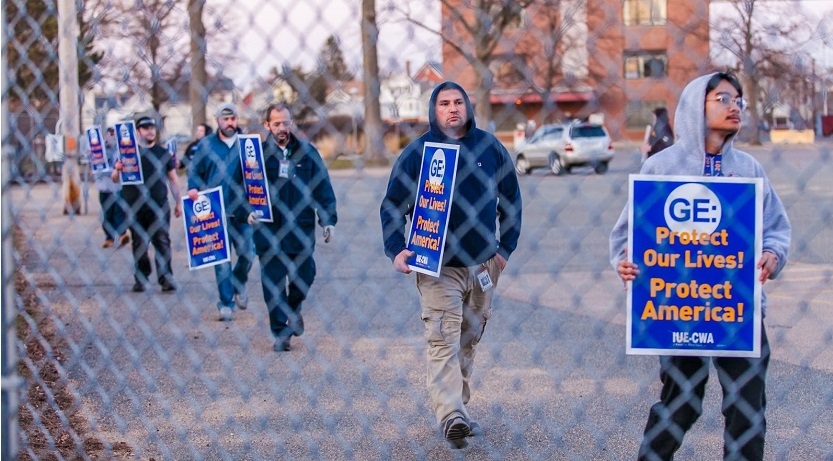 GE workers in Lynn, Massachusetts have cleared the building four times after learning they had been exposed to a worker with COVID-19. Photo: Issac Devilla, IUE-CWA Local 201.

Last Wednesday union members at General Electric plants across the country protested to pressure the $88 billion company to shift production to ventilators and ensure safe working conditions during COVID-19.

Actions at plants in Massachusetts, Virginia, Texas, and New York were coordinated by the Industrial Division of the Communications Workers (IUE-CWA)—the latest in an escalating pressure campaign.

GE workers are facing a two-fold threat under COVID-19: dangerous working conditions and job loss. On March 23 the company announced that GE Aviation would cut 10 percent of its total U.S. workforce and that half the company’s maintenance, repair, and overhaul employees could be furloughed for the next three months.

GE could avert the layoffs, the union said, by accepting funds from the recent stimulus bill or by shifting the impacted GE Aviation shops to ventilator production. Instead, it has rejected federal assistance and partnered with Ford to build ventilators. Ford is making 50,000 ventilators at one of its Michigan plants, with “clinical expertise” from GE Healthcare.

In Lynn, Massachusetts, IUE-CWA Local 201 held a socially-distanced COVID-19 protest during each of the plant’s three shifts. The 1,300-person plant, which builds jet engines, has seven COVID-19 cases and workers are demanding a paid two-week shutdown to sanitize the plant and transition it to ventilator production.

Workers have cleared the building four times after learning they had been exposed to a worker with COVID-19. Each time, workers gathered in the parking lot and stated their demands to management. Section 502-143 of the National Labor Relations Act protects workers who choose not to work under “abnormally dangerous conditions.”

The protests have paid off. Workers have won temperature checks upon entering the plant, personal protective equipment (gloves, soap, paper towels, and some masks), and a tenfold budget increase for cleaning and supplies. Workers are still fighting for masks for all workers, hand sanitizer, and more protective uniforms. Local 201 has forced the company to waive discipline on COVID-19 related absences. Last week, 450 workers stayed home.

Union president Adam Kaszynski says these protections are “still not enough, but management wouldn't have done much of anything if it wasn't for members fighting back.” The union’s wins have been written into company policy, which can be changed at any time, so the local is fighting for a binding memorandum of understanding.

More than 300 workers in the plant are over 60 years old, and more have underlying health conditions. The union wants these workers to be paid to stay home and for paid sick time for all workers to be expanded.

Local 201 has used highly effective organizing tactics to communicate with members and build community support. These include updating members with regular bulletins and text messages, creating a clear set of five pandemic safety demands, and leveraging local, national, and social media to communicate with the public. The union surveyed its membership on access to health care and COVID-19 hardships and created a petition to publicize its grievance filed with GE.

Disaster capitalism, or the way that companies use crises to consolidate their power, has been central to discussions and organizing in Local 201. “If we don't get ahead of this crisis and coming recession and put demands out that are a little larger than normal,” Kaszynski says, capitalists will use COVID-19 to “shift production to non-union places and push deregulation,” creating “another notch on the neoliberal belt.

“Now is the time to raise demands that maybe you didn't think were possible before the pandemic started,” he said.

SALEM, VIRGINIA WARNS THIS WON’T BE THE LAST CRISIS

In Salem, Virginia, laid-off GE workers demonstrated outside their 750,000-square foot factory, which closed last November, holding signs that said the plant could be making ventilators and providing jobs for the community. Vicky Hurley, who had worked at the plant since 1994 and was president of Local 82161, made sure all three local media stations were there.

Hurley helped organize the action because she feels “GE made a horrible mistake closing our factory.” The closure cut 260 jobs. She says workers have “more than capable people here that could build ventilators.” Shifting production to ventilators is key because “this is not going to be the last time we go through something like this. I feel like there’s going to be a need all the time for ventilators, and GE could utilize the plants that they have more efficiently.”

Workers at GE in Dallas want to make ventilators too. Almost half the 50-person facility participated in a day-shift protest. GE plans to close the facility, which provides maintenance for power plants that use GE equipment, in February 2021. Local 86788 is fighting to keep it open by transitioning to ventilator production.

As cases in Dallas grow, worries about safety do too. “I don't want to bring this virus home to my family,” says President Walter Bradford. “I shouldn't get punished because I don't feel safe to work in my shop.” The local has won hand sanitizer, but is still fighting for disinfecting wipes. Management keeps masks locked up and is only distributing one mask per week to each employee.

More concerningly, members of management who drove through Louisiana on their way back from a plant in Alabama are on the shop floor, despite the governor’s orders that motorists coming from Louisiana quarantine for 14 days.

The union is using media coverage to push management.

In Schenectady, New York, members of Local 81301 held a socially-distanced protest to demand that GE Aviation immediately transition to producing ventilators instead of laying off workers and reducing hours. The 620-person plant produces steam turbines and generators. Workers have safer working conditions than other GE plants, largely because of state laws, and are not facing layoffs or closure.

Wednesday’s action was a show of solidarity with other GE workers across the country––like the 345 workers facing layoffs or furlough at GE Aviation in Stother Field, Kansas, and those who have lost their jobs in Virginia.

It was also a fight for health care workers and COVID-19 patients anywhere. President Scott Fernandez said, “We want ventilator work. We’re deemed essential when most of the country is at home. We’re the ones who make money for the company. It’d be nicer to come to work if we could contribute to helping this pandemic.”