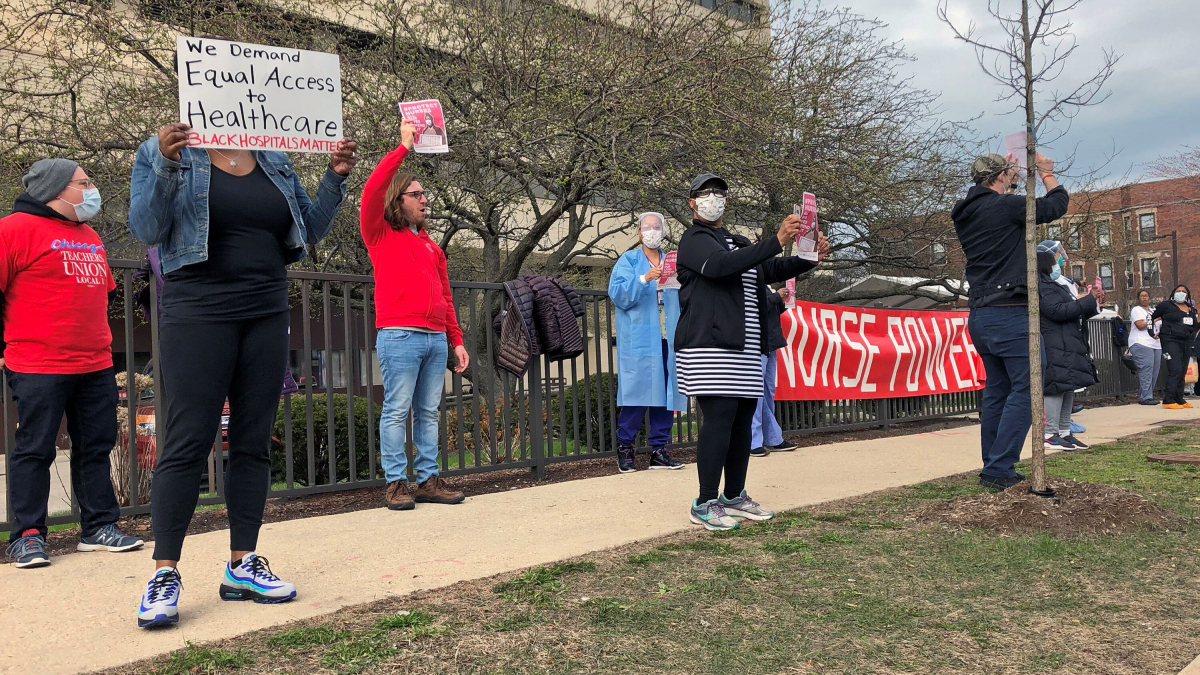 At this moment of unprecedented crisis, how can we ensure the physical safety and economic health of U.S. workers? According to a recent USA Today op-ed by four national union leaders—“Coronavirus is a stress test for capitalism, and we see encouraging signs”—the answer is partnering with “well-managed companies” who can “lead the recovery by pulling together and finding new ways to protect, pay and retain employees.”

We respectfully disagree. Faced with the coronavirus, the only way to protect the lives and livelihoods of working people is through class struggle, not class snuggle.

It’s true that some employers have enacted relatively pro-worker measures in response to COVID-19. But it’s surprising that an op-ed written by labor leaders fails to note the obvious reason for this benevolence: these companies have been compelled to do so by worker action, including the presence of labor unions.

All companies—even those with the most enlightened CEOs—are pushed by market competition to prioritize profits above all else. That’s why working-class people can’t ask “good” corporations to save us. We have to save ourselves.

This is true in unionized workplaces, as seen by the nationwide upsurge of nurses demanding employers put safety needs over their bottom line. And it is true in non-union workplaces like Amazon and Whole Foods, where workers over recent weeks have led a heroic wave of walkouts for basic protections.

Many of these struggles have already won important gains. Amazon was pushed by the protests to finally start providing masks to warehouse workers and take the temperature of employees before their shifts. And after its walkout, Instacart announced it would meet its employees’ demands for health and safety kits.

But it will take a lot more struggle and a lot more workplace organization to win the urgent economic and health measures that working people so desperately need to weather the worst crisis in generations.

Essential workers across the country continue to risk their lives, and receive poverty wages, due to employer greed. Women and workers of color disproportionately shoulder these burdens. It’s not just our physical health that is at risk today. Faced with the coronavirus crisis, the emergency economic protections granted in the United States pale in comparison to most industrialized countries.

U.S. workers in companies with over 500 employees, or under 50, still are paid sick leave. A one-time $1,200 check from the government won’t come anywhere near to making us whole in the face of what will likely be the worst economic crisis since the Great Depression, and it entirely leaves out millions of undocumented workers. Finally, we remain the only major country on earth not to guarantee universal healthcare as a right, so many of the over 22 million people who have lost their jobs over the past month now risk bankruptcy in addition to the virus.

Capitalism is failing the stress test of COVID-19—and we won’t change this by appealing to the morality of corporate leaders. Employers understand that granting robust welfare protections and recognizing unions would significantly cut into their profits and power—which is why Amazon is firing workers who dare to organize, why Trader Joe’s is actively union-busting, and why corporate-backed politicians on both sides of the aisle have failed to back the ambitious People’s Bailout that this moment requires.

Labor unions today have the political opportunity and moral responsibility to help organize a movement of the whole working class, organized and unorganized alike, to fight for the safety and welfare protections that we all deserve. Like the workers at Sprouts Farmers Market in McAllen, Texas who won increased social distancing in their store by building a super-majority of support with their co-workers to demand safer working conditions from the boss, we cannot wait for corporations to do the right thing, we need to force them to.

Related
Bay Area Transit Workers Organize for Hazard Pay, Build toward Contract Campaigns »
Whose Safety? Our Safety! »
Steward's Corner: How to Bargain for a Healthy and Safe Return to the Workplace »
Workers Have Leverage. It's Time to Use It. »
New York City Municipal Employees Protest Abrupt Return to Offices »

"U.S. workers in companies with over 500 employees, or under 50, still are paid sick leave."

Is there a word missing in this sentence?