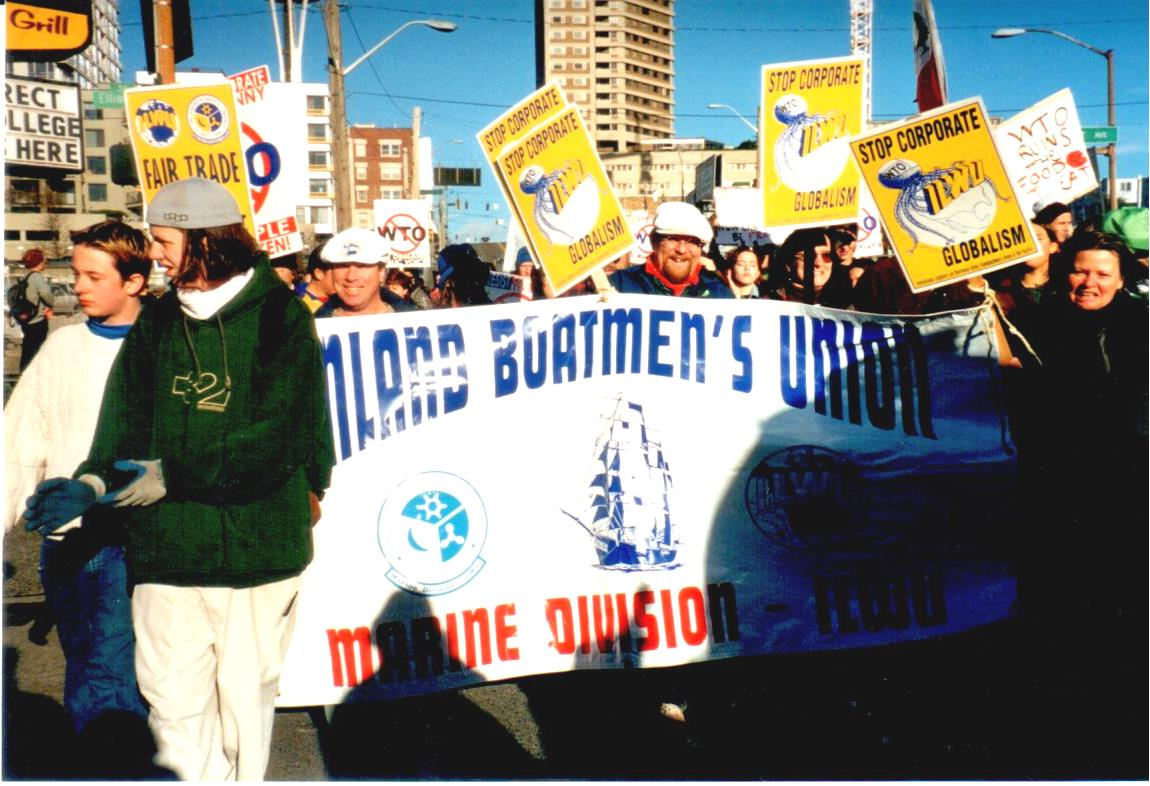 The author (left, holding banner) and other members of the Inlandboatmen's Union marched against the World Trade Organization in Seattle. "The WTO protest was a seminal moment in my life," he writes. "It broadened my horizon, from militant waterfront trade unionism to a real awareness of the impact of corporate globalization on the developing world... And in retrospect, if we knew things were going to get as bad as they are today, we never would have left the streets."

The morning of November 30, 1999, was unseasonably warm as I jumped in my car to meet up with my fellow members of the Inlandboatmen’s Union at our headquarters in Seattle. At the time I was a business agent for tugboat workers and running for national president of the IBU, the marine division of the Longshore union (ILWU).

Together we gathered 300 picket signs, bullhorns, and our union banner before heading down to the fountain at the Seattle Center. There we mustered with 500 other members from up and down the West Coast, Hawaii, and Canada and headed into the stadium together, chanting “ILWU.”

It was the first day of the meeting of the World Trade Organization (WTO), a little-known institution that was helping drive a corporate agenda worldwide—slashing labor standards, environmental standards, social programs, and anything else that could get in the way of profits.

Inside the stadium we joined with workers and guest speakers from around the world. It was a rowdy event! ILWU President Brian McWilliams announced during his speech that “today there will be no business as usual,” and indeed there wasn’t. The ILWU workers had shut down all the ports on the West Coast in solidarity with workers, students, environmentalists, and nongovernmental organizations from around the world who gathered that day in the Port of Seattle to say, “Enough is enough.”

Our message to the world was clear: Corporate globalization and so-called “free trade” had gone far enough. We were ready to take a stand against the neoliberal agenda, for together we believed another world was possible.

Next, thousands of us from the labor rally marched downtown to join other protesters who had been in the streets since early morning, blocking the start of the WTO meeting.

But suddenly the word came down from the top AFL-CIO officials to divert the march away from downtown, as things had gotten “out of hand.” So the labor rally marshals attempted to redirect the march.

Luckily, I had a bullhorn. When a group of about 75 militant and spirited ILWU members came up to the marshals’ line, I yelled, “ILWU over here,” and they came through the line. This group was led by the two ILWU vice presidents, Jim Spinosa and Leonard Hoshijo, who after a brief parlay agreed to continue into the fray, rather than ignore the desperate urging of the other protesters who were in a standoff with the Seattle police at several barricade sites.

Looking back, this was one of the key moments in the week of action and one that still today makes me proud to be an ILWU member.

It should be noted that some other unionists broke through the marshals’ line, including a contingent from the reform wing of the Teamsters (Teamsters for a Democratic Union) and various other members of the labor march. Sadly, though, most turned around and went back to the Seattle Center, not knowing exactly what was happening.

What came next was a different, surreal world, full of tear gas, giant puppets, Wobblies, and activists of every stripe who managed to shut down the WTO proceedings that morning using a variety of tactics.

President Clinton was in town, and by this time was thoroughly embarrassed by how things were unfolding, so the administration began to pressure our governor and local mayor to “get things under control.”

Although several hundred members of other unions joined us in coming to the aid of the other protesters, we were not able to stop that week’s teargassing and mass arrests. Still, the solidarity between organized and unorganized workers helped to solidify the “Teamsters and turtles” coalition that was born that week in the streets.

We managed to shut down the WTO that first day, which helped give the delegates from the developing world the courage to speak out during the WTO sessions and shake up the world order for a week.

GETTING ACTIVISTS OUT OF JAIL

The rest of the week was a blur, as events unfolded rapidly. I do recall marching up from the waterfront on day two, after the Steelworkers rally, and getting my first taste of tear gas, compliments of the Seattle police. I was fortunate that a young woman wearing a dolphin outfit gave me some lemon juice for my eyes as we trudged along.

One of the other highlights for me was being able to agitate the local and top ILWU leadership, along with IBU member Robert Irminger, to help get out of jail those activists from various movements who had been arrested.

Somehow on day three we were able to create enough momentum that there was a perception that unless the mayor let everyone out, there was going to be another shutdown of the Port. To his credit, Ron Judd, the head of the King County Labor Council, said he would carry that message to the mayor’s office.

That pressure—along with the hundreds camped out in front of the jail in solidarity, and the work of our legal team—was enough to get those arrested for protesting released!

After the protests I worked with a handful of activists from the Direct Action Network, local labor leaders, and other activists of all stripes to call a meeting at the Catholic Seamen’s Club to try to continue building the new fighting coalition.

A MOVEMENT IS BORN

As it turned out, the global movement against corporate globalization was pretty much born in Seattle that week, in what the newspapers in Paris called “the first day of the 21st century.”

I was one of several ILWU veterans of the “Battle in Seattle” who stayed involved afterward. Some of us were fortunate enough to travel to Prague to protest the International Monetary Fund and the World Bank; to Washington, DC, for another IMF protest; and to New York for the World Economic Forum.

We also helped the Steelworkers in what was later termed the “Battle of Fife,” when police mobilized with their robo-cop gear against a march to support a picket line in the small town of Fife, near Tacoma. This was about six months after the WTO, and I was there with other waterfront unionists and a mixed group of activists. The day would have been a disaster were it not for the outstretched arm of solidarity that ILWU Local 23 Tacoma extended.

A year and a half later, I was hired temporarily as the lead organizer for a large rally on the Canadian border to protest a Quebec City meeting of the Free Trade Area of the Americas, a NAFTA-like proposed agreement that would have covered almost the whole Western hemisphere.

Everywhere we went, we were shown tremendous respect, as the reputation of the street struggles in Seattle had crisscrossed the world through the emerging internet. Tech-savvy activists created the Independent Media Center, which became a great tool in the ensuing years. This unique, loose-knit group was instrumental not only for informing the movement about issues and upcoming actions, but also for helping to keep our spirits up, long before social media was a mainstream thing.

CARRIED THE LESSONS INTO UNION WORK

The WTO protest was a seminal moment in my life. It broadened my horizon, from militant waterfront trade unionism to a real awareness of the impact of corporate globalization on the developing world. The WTO, NAFTA, and other trade agreements made without popular consent are tools for the 1% to control the world economy, politics, and the environment. These days I’m glad to see a new generation taking up the struggle with a focus on climate change.

That week I learned about international solidarity, thinking on my feet, working in coalitions, using leverage and sometimes bluffing when facing an overwhelming foe, and of course the sense that “the people united will never be defeated.” These lessons have served me well on the waterfront.

A week after the WTO, I lost the election for IBU president by 10 votes. But a few years later I was fortunate to be offered a job as an inspector for the International Transport Workers Federation’s Flag of Convenience campaign. FOC ships represent an early corporate globalization effort by greedy international ship owners. Fighting for justice for Seafarers on these ships today, I use skills that I began to develop during the Battle of Seattle.

This rich and important work would have never happened for me had it not been for those eye-opening experiences 20 years ago. And in retrospect, if we knew things were going to get as bad as they are today, we never would have left the streets.

Jeff Engels is an inspector for the International Transport Workers Federation.

Related
How Intermodal Yard Workers Doubled Their Pay »
It's Awfully Convenient for Shippers that Longshore Workers Get Blamed for Delays, As Contract Fight Looms »
Captured by the Flag »
Insatiable Shipping Companies Set the Table for the Suez Canal Ship Debacle »
Viewpoint: Will Your Local Union Sign On to Ask the WTO to Waive Patents on Covid Vaccines? »