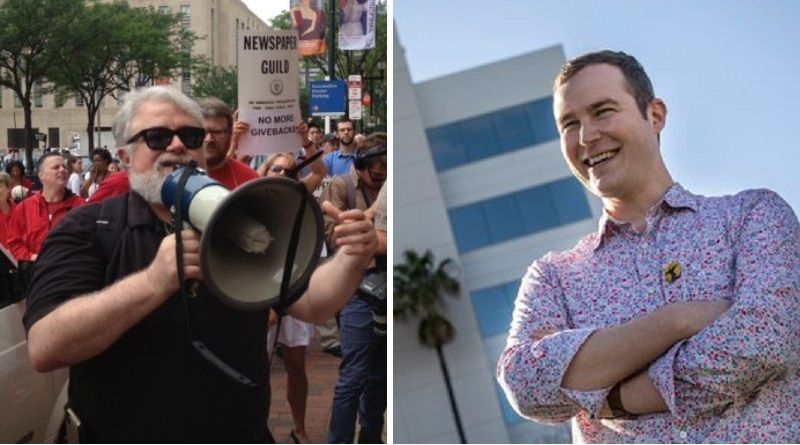 This fall the NewsGuild will rerun its hotly contested presidential election.

In May incumbent Bernie Lunzer narrowly beat challenger Jon Schleuss of the L.A. Times local, 1,282 to 1,081. The NewsGuild, an affiliate of the Communications Workers (CWA), has about 20,000 members in the U.S. and Canada.

Schleuss and others challenged the election results over concerns about the nominations process, ballots mailing, and composition of the union’s elections committee.

The elections committee weighed the challenges and issued its decision August 12. If it had rejected the challenges, they could have been appealed to the U.S. Department of Labor.

The elections committee found merit in the challenge filed by President Kamala Rao of the NewsGuild’s largest local, the Canadian Media Guild—though the committee took pains to point out that the problems were the local’s own fault.

It concluded that Rao’s local had failed to thoroughly review its list of eligible voters and their addresses. The result was that 1,089 eligible members had their ballots sent to wrong addresses, and 942 non-members were wrongly sent ballots.

The committee rejected some of the other challenges it received—concluding, for instance, that it had no legal obligation to notify all members that nominations for officers would occur at the union conference—and declined to address others on the grounds that ordering a rerun made them moot.

WHAT WILL BE DIFFERENT?

This time the American Arbitration Association will conduct the election. It will take additional steps to correct bad addresses, including running the mailing list through commercially available address-correction databases.

A hot topic in the campaign was that many recently organized journalists weren’t eligible to vote. About 2,000 people have joined the NewsGuild in an organizing boom over the past few years at newspapers, magazines, and digital newsrooms—including Schleuss and his co-workers at the L.A. Times.

Most of these new members are still campaigning for their first union contracts. New members aren’t required to pay dues until they secure a first contract. But to be eligible to vote in the original election, you had to be a dues-paying member by last fall—something people didn’t find out until the deadline had passed.

This time, to be eligible to vote, you can pay one month’s dues by September 16. A mailer instructing potential voters how to shore up their eligibility to vote in the rerun is supposed to go out by next week.

The votes will be counted December 10.

Alexandra Bradbury is the editor of Labor Notes.al@labornotes.org
Related
Every Union Contract Right Now Should Be the Best Ever »
UFCW Reformers Look to 2023 »
New Leadership, New Direction in Major Midwest Teamsters Local »
Ballots Are Out in UAW Election, with Contrasting Visions of Unionism Up for Leadership »
Ten Years Ago, Chicago Teachers Gave Us All a Jolt of Hope »

Hopefully the next election will be more 'hotly contested' than the first one in which less than 12 percent of members voted.