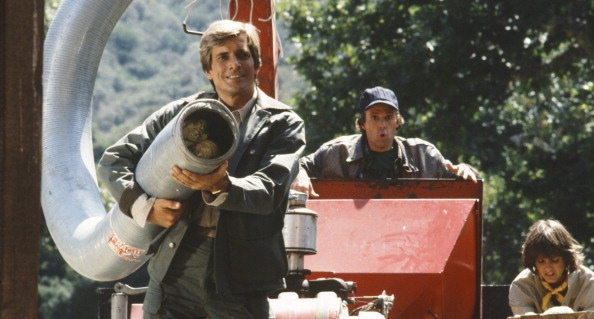 In the 1983 union episode of this over-the-top TV show, the heroes organized an impromptu union election for farmworkers and fought off the employer's goons with a cannon that shot cabbages.

The A-Team was a hit show among my friends when it first aired in 1983. Growing up in a union family, one episode that stood out for me was “Labor Pains,” when the A-Team helped farmworkers organize a union. I recently watched it again to see how well it presents unions and the organizing process.

But first, what was The A-Team? I’ll say right now, it’s a ridiculous show—a juvenile, masculine fantasy of vigilante justice. It ran on NBC for 98 episodes over five years, featuring four members of a Vietnam War commando unit. Convicted by the military for a “crime they didn’t commit,” they escaped prison and travelled around the U.S. finding work as “soldiers of fortune” on the run from the government. As the show opening says, “If you have a problem, if no one else can help, and if you can find them, maybe you can hire the A-Team.”

The characters have different and complementary skills. The leader is Hannibal (George Peppard). Face-Man (Dirk Benedict) is the handsome con-man who procures the things they need for their missions. Murdock (Dwight Schultz) is the oddball pilot, and B.A. (Mr. T) is the driver, mechanic, and muscle. In the fifth season they added another character, Frankie Santana (Eddie Velez).

According to the A-Team Wikipedia page, in response to criticisms of sexism, the show added two female characters who only lasted through season two. “Labor Pains” features one, Amy (Melinda Culea), a journalist. (If you’re interested in a snarky summary of every A-Team episode, there’s a guy who watched every one and blogged about it for a year.)

“Labor Pains,” which originally aired November 8, 1983, opens with the team on the run from the government in their iconic black and gray GMC van. The team members evade capture by crashing through a billboard and jumping over a river, because of course they do.

Stopping in a small-town store, they encounter a couple trying to buy food and getting hassled by the manager. Some tough guys come in to intimidate the couple and the A-Team beats them up.

The couple explains they are with a group of 45 farmworkers at a nearby camp who have gone on strike. Their boss, Ted Jarrett, is “the biggest grower in the valley” and pays them “slave wages.” Jarrett took most of the food in town in retaliation and forced the local stores to raise their prices. The workers might go back to work because they’re hungry.

The A-Team visits the camp and gives the workers a pep talk:

Hannibal: “Now Jarrett’s got as much trouble as you do. lf he doesn’t get that crop picked, he goes belly up. Now you all know that, don’t you? You’ve got to make that work for you. You use that, you gain strength.”

Murdock and Amy tell them it’s going to be a fight and they need to back each other up, and Hannibal urges them to form a union. The A-Team promises to get the workers food if they keep up the struggle, and the workers agree.

The A-Team disguises themselves as caterers and crashes a party at Jarrett’s house. They shoot up the place, taking all the food and $9,000 they have determined he owes the workers. As the A-Team leaves, Hannibal cryptically tells Jarrett, “The newly founded Workers’ Cooperative thanks you.”

They drive to one of Jarrett’s cabbage fields, handing out union flyers to workers and confronting the field supervisor. They plan a secret union meeting for the next day in a local barn, but the boss’s goons threaten a farmworker’s kid to get information about the meeting.

The union meeting is packed and Face gives an impassioned pro-union speech as they pass out union election ballots:

“I want to thank you, because when you leave there’s gonna be a union in this valley that the growers cannot stop. No longer are they going to be able to pay you less than you deserve for the kind of work you’re doing. And another thing, you’re never gonna get ripped off again!

“All right, folks, now listen. We’re gonna hand out some ballots for you to vote on. Now, all you do is check yes for ‘l want a union’ or no for ‘l don’t.' Then we’ll gather them up, count them, and see where we stand, yeah or nay. But l want to urge you to vote yes. That’s the only choice that makes any sense here…

“As you cast your vote, remember, this is a message that will tell Jarrett you’re not a bunch of scared people anymore. You’re a union, and as a union, you cannot be pushed around. Not now, not ever.”

By the time the goons arrive, the barn is empty, but then the A-Team surprises them by shooting cabbages at them with a cannon they made out of farm machinery. After the goons are beaten, the workers tell Jarrett they have voted for a union unanimously.

Back at the union office, one of the workers says that “the NLRB rep is coming in a couple days to stamp everything.” The episode ends with the government arriving and the A-Team flees, crashing through the same repaired billboard again.

HOW DID THE A-TEAM DO?

So how do we unpack all this? There’s some good, pro-union stuff here, mixed in with confusing and inaccurate material.

The workers initiated a strike on their own and were already acting like a union, which is great. The A-Team is obviously pro-union and their speeches are really good, with a clear understanding of collective action and solidarity. And they volunteered to take on significant risks in this campaign to help the workers, with no financial compensation.

But it’s strange that the workers, already on strike, needed the A-Team to lecture them about unity and urge them to form a union. Of course this was necessary because, as with every episode of this show, the A-Team are the heroes who solve the problems and fight the bad guys. The conventional framework where the heroic outside organizer comes in to save the workers fits well with the A-Team’s style.

Admittedly, workers usually need help organizing a union. But it’s unclear how the A-Team knows anything about union organizing. Perhaps some of them come from union families or were union members? We never find out, but maybe that’s asking too much of the A-Team.

It’s also unclear how the workers will handle contract negotiations with Jarrett after the A-Team disappears. Having a certified union is not the end of the struggle. Ideally we would see the development of a strong rank-and-file leadership committee… but this is the A-Team. They don’t do trainings and they don’t read Labor Notes.

And of course there’s that cabbage cannon! The Mythbusters show declared that it’s plausible, but using it against goons with guns is so absurd, it makes me wonder for a second if the A-Team was actually a brilliant parody of an action show.

Why a Union Episode?

This appears to be the only A-Team episode that features a union. Explicitly pro-labor TV was hard to find in the conservative, post-PATCO Reagan era. Although the team often helps powerless folks in bad situations, this show was known more for cartoonish violence than for any progressive content. Why did they choose this union theme? Perhaps because the United Farm Workers had been in the news over the years with their high-profile grape and lettuce worker campaigns.

In my view, the very pro-union content outweighs the flaws, and overall this is a unique episode from an otherwise dubious show. Labor folks and teenage boys should enjoy it. I rate it 4 out of 5 cabbages.

Eric Dirnbach is a labor movement researcher and activist in New York City. He has published in Jacobin, New Labor Forum, Organizing Work and Waging Nonviolence.

Related
Interview: Why I’m Voting No on the IATSE Hollywood Basic Tentative Agreement »
The Real-Life Auto Strike Behind the Runaway Netflix Hit Squid Game »
Mexico’s Only Independent Farmworker Union Struggles On Despite Obstacles »
Billionaires Can Have the Cosmos—We Only Want the Earth »
Review: White Workers Who Buy into Racism Are Shooting Themselves (and Everyone Else) in the Foot »