The Better Burn Barrel from the Boeing Strike Lives On 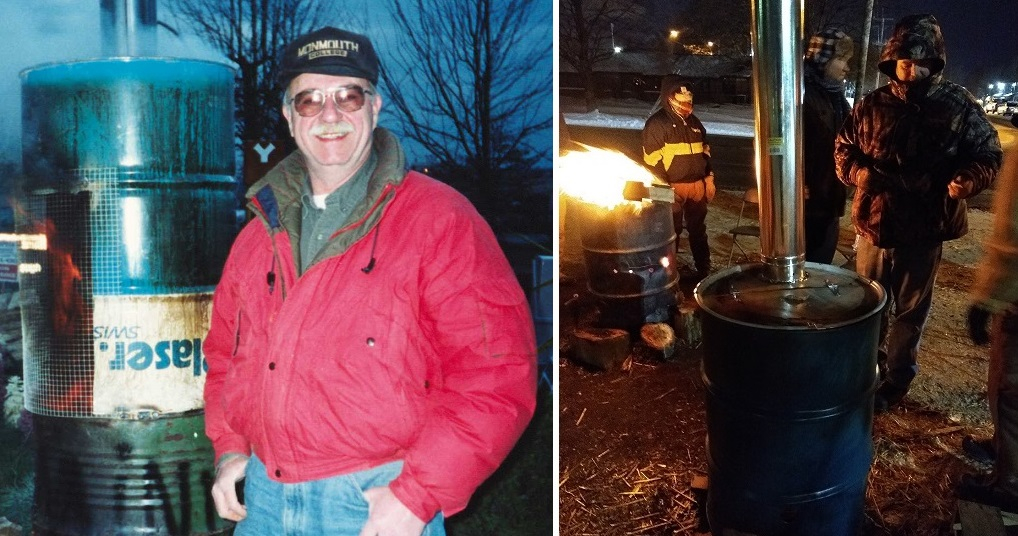 Tom McCarty (left) was one of the striking Boeing aerospace engineers who 19 years ago reengineered the traditional picket-line burn barrel. This week UE strikers at the Wabtech locomotive plant in Erie, Pennsylvania, are carrying on the tradition (right). Photos courtesy of Tom McCarty, Mark Meinster.

It’s just what you would expect from airplane engineers on strike—they reengineered the picket line burn barrel to be more efficient.

The strikers were Boeing engineers, members of the Society of Professional Engineering Employees in Aerospace (SPEEA), who walked the lines for 40 days in 2000 during a rainy Seattle winter.

Nineteen years later their design is still in demand. Just this week, UE members on strike at the Wabtech locomotive plant in Erie, Pennsylvania, built 20 of these better burn barrels after reading about them in the Labor Notes book A Troublemaker’s Handbook 2.

The key difference with the “SPEEA stove” is that it has a closed top. Smoke is released through a tall stovepipe.

The closed lid confers several advantages: Wood lasts twice as long and burns twice as hot. It’s more environmentally friendly. You don’t get smoke in your face. And you can even cook food on top.

“We did a lot of cooking,” retired Boeing engineer Tom McCarty, one of the SPEEA stove’s inventors, told us in A Troublemaker’s Handbook. “Eggs in the morning, chili at noon, and stew at night.”

After the Boeing strike, they spread the gospel to other union members. When newspaper workers struck Seattle’s two big papers later the same year, they built their own SPEEA stoves.

McCarty, now the president of the union’s retiree society, said he’s flattered that after all these years he still hears from people who want the plans for the improved burn barrel.

Want to build your own? Check out the instructional guide, “How We Built the SPEEA Stove,” by Morris Adams and Tom McCarty.

Labor Notes is happy to spread the word about useful resources like this. If you have resources you’d like to share with other union members, or if you’re looking for help, write us at editors[at]labornotes[dot]org.