Viewpoint: Where Are Union Auto Workers' Voices in Scandal Reporting? 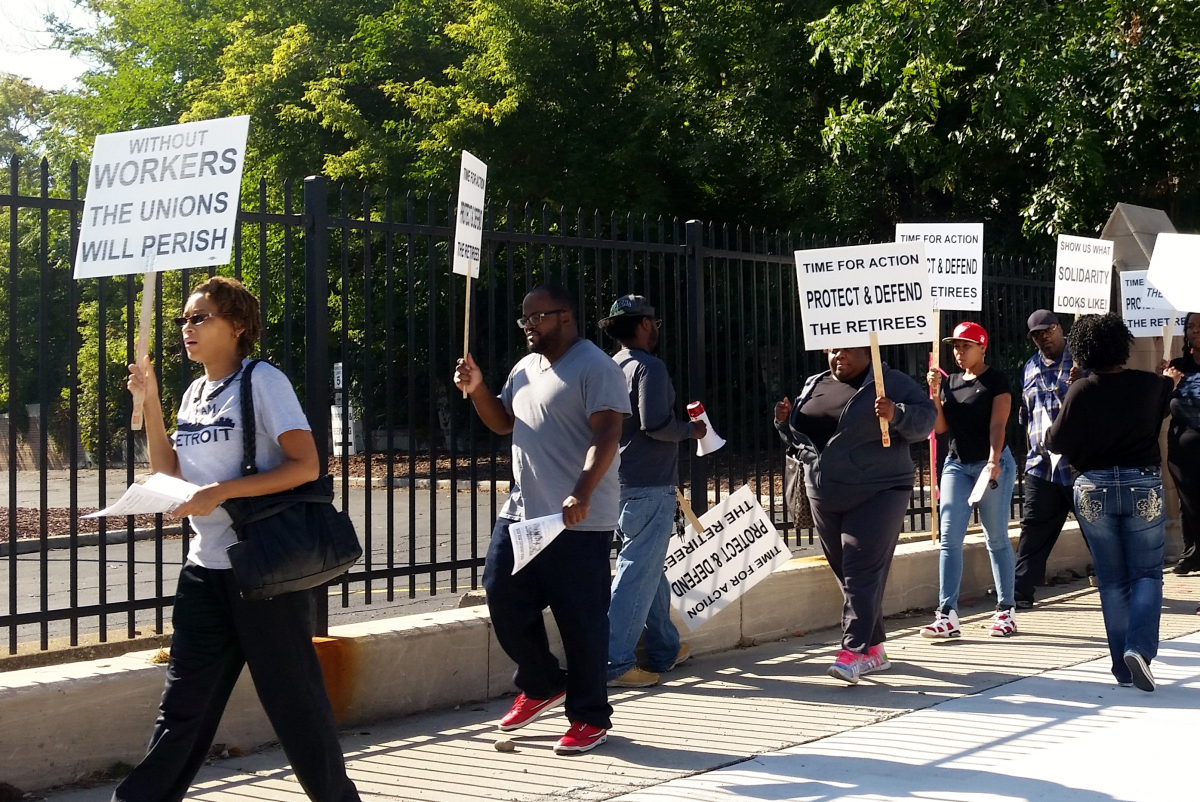 The vote-no groundswell against a two-tier contract at Chrysler in 2015 forced union tops back to the table to do better. Now we learn that Chrysler executive Al Iacobelli claims to have bribed union officials to win more contract concessions. Photo: Judy Wraight.

A Detroit News article published in October revealed that our union, the Auto Workers (UAW), is building a luxurious three-bedroom, three-and-a-half-bath “cabin” as a permanent residence for retired President Dennis Williams at Black Lake, the union’s educational retreat center in Northern Michigan.

The article implied that this wasteful project had the full support of delegates like us at the recent UAW Constitutional Convention. But if this project was before the delegates, it was hidden in obscure language and therefore not apparent.

In fact, there was widespread opposition to the proposal to raise the salaries of UAW officials by 31 percent, particularly given that an increasing number of UAW members have multi-tiered wages and benefits.

At the convention, Williams, then the outgoing UAW president, minimized the corruption charges that have been brought against the union’s top officers and staff, claiming that they were a few bad apples and that no members’ dues had been involved.

Clearly the construction of a luxurious so-called cabin with money coming from interest on the union’s strike fund indicates a broader degree of bureaucratic excess than Williams suggested.

It is outrageous that UAW officials, members of the long-ruling Administration Caucus, arrogantly flaunt their positions for personal benefit at a time when the UAW should be preparing to take on the corporations and their unequal wage and benefit systems.

Contracts with the Detroit Three automakers expire next year.

MOST STILL WANT A UNION

The reality is that many rank-and-file members have been unhappy with the UAW leadership for years.

To many, the problem is the union leadership’s decision to engage in “joint activity” since the 1980s and to declare that the interests of the union and the company are the same—that we are a “partnership.” Corruption grew out of this flawed orientation.

Many thought the choice of FCA (Chrysler, the smallest U.S. automaker) as the target for 2015 negotiations was strange. But now we learn that FCA executive Al Iacobelli claims to have bribed union officials to win more contract concessions. In the end a tainted negotiation set the tone for UAW bargaining at the Detroit Three automakers to the detriment of the membership.

We need honest leaders dedicated to the interests of the working class. Instead our union has been opened up to a federal investigation—and the scandal unearthed during the investigation is serving as ammunition to discredit the labor movement. The Detroit News article repeatedly quoted a pro-”right-to-work” auto worker, as if anti-UAW workers are the main opposition to corruption.

The fact is that an overwhelming majority of auto workers in union plants have opted to remain in our union—we want to fix what’s been broken for a long time. Why can’t the news media talk to us?

Diverting the strike fund interest to extravagance is a travesty when we still have many temporary and two-tier members without benefits and pensions.

Today in our contracts, so-called “temporary” workers have a four-year wage progression. If they are lucky enough to transition to a permanent job, known as “in progression,” none of their time as a temporary counts towards their seniority.

In-progression wages at Ford begin at $17 per hour, and it takes eight years to reach the top wage of $28. The disparity in pensions and medical benefits upon retirement is another glaring inequity that must be addressed.

In the 2015 negotiations, Chrysler members voted down the tentative agreement, forcing UAW leaders back to the table to establish a bridge between the lower- and upper-tier wages. With the next contract, lower-tier members need to gain equal benefits and pensions. We must have an adequate strike fund to back up this demand.

Neither UAW leaders nor the public should underestimate the desire of rank-and-file members to demand a leadership free of corruption—and a contract that meets the needs of all UAW Detroit Three workers, eliminating the divisions among us.

Such a militant UAW would also enable us to launch an effective drive to unionize non-union plants.

Scott Houldieson is the vice president of UAW Local 551. Martha Grevatt is a trustee of UAW Local 869. Both were convention delegates.

New sentences were handed down in November in the ongoing scandal over the misuse of UAW-Chrysler National Training Center funds.

Keith Mickens, a former top aide in the UAW-Chrysler department, became the first UAW official sentenced; he’ll serve a year and a day, along with the former director of employee relations at Chrysler.

FCA Vice President Alphons Iacobelli was sentenced to five and a half years in August for diverting $4.5 million from the joint training fund to himself and UAW officials. Iacobelli used his share to buy a $350,000 Ferrari and jewel-encrusted $38,000 pens.

A Chrysler accountant, also charged in the scheme, told prosecutors the conspiracy was meant to keep senior union officials “fat, dumb, and happy” as they bargained with the company. The UAW says the corruption did not affect bargaining because the union has “layers of checks and balances in contract negotiations, including voting by the entire membership.”

Other indictments and sentences are yet to come. The UAW also has joint training centers with Ford and GM.

Writing in support of probation for Mickens, a former local union vice president said Mickens was just “following orders from his superiors... that is the reason why Brother Mickens went so far in the UAW because of his willingness to follow orders from upper Union Management.”

Meanwhile there’s an ongoing federal investigation into the use of $1 million of membership dues on hotel stays, condominiums, liquor, food, and golf fees in Palm Springs, California. Union officials say these expenses were reasonable and related to annual week-long training conventions held for local officials.