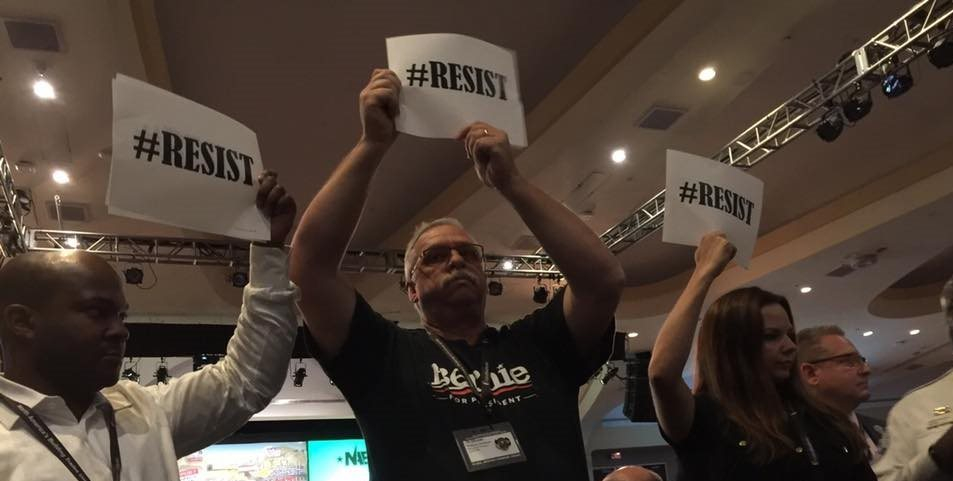 When they heard President Donald Trump would address the Building Trades national legislative conference, activists from Electrical Workers (IBEW) Local 569 knew they had to do something.

“We couldn’t let him come and speak to us and just sit there,” said William Stedham, a “workaday Joe” and executive board member of the San Diego-based local. “If we hadn’t, everyone would think that the Building Trades was on board with him 100 percent, and we’re not.”

So a few minutes into his speech, six of them stood up with signs that said “Resist” and turned their backs on the billionaire-in-chief. The gesture flew in the face of a directive from Building Trades leadership that attendees should “be on their best behavior.”

San Diego activists are hot about Trump’s decision to appoint a top lobbyist from the anti-union Association of Building Contractors to a key role on his incoming Department of Labor team.

“The things we’ve been fighting hard for—more project labor agreements, more local-hire agreements, and better training and workplace safety—none of them are being supported by the Trump administration,” says Gretchen Newsom, political director of Local 569.

The annual conference draws 2,000 delegates from building trades unions across the U.S. and Canada. It took place in the Washington Hilton, the same hotel where Ronald Reagan was shot after giving a speech to the same group nearly 36 years ago to the day. (Just four months later, Reagan fired 11,000 striking air traffic controllers, ushering in a cascade of union-busting from which the labor movement has yet to recover.)

The protest was a silent one, a strategic decision by the activists. “One of the things that Trump really likes is that when people are angry with him and volatile, he becomes volatile—so we wanted to do a silent protest,” Newsom said.

Nevertheless, it managed to be disruptive. Security snatched their signs and yanked the demonstrators out of the room. “Our political director, she had a satchel full of 8 ½ by 11 sheets that said ‘Resist,’ so every time they pulled them away from her, she pulled out another one, and another one. I think she did it six times,” said Stedham, who proudly sported a Bernie Sanders T-shirt during the action. (Local 569 endorsed Sanders in the primary.)

Audience reactions were split, Stedham said. “There were jeers from the crowd, half a dozen yelling ‘Sit down, sit down,’ and then there were a couple of other voices saying, ‘Leave ’em alone’ or ‘Let them stand.’”

Afterwards the protesters received a positive response from other delegates. “I’m still wearing my Bernie shirt, and I’ve had dozens of people coming up and shaking my hand, saying, ‘Thank you—that took guts,’” said Stedham, speaking from his hotel room a couple hours later. “I’ve had business managers from other trades come up to me and giving me their cards.”

The demonstrators said they don’t trust Trump’s talk about jobs. “There are dozens and dozens of union contractors that have had to sue him to get paid,” Stedham said. Those include IBEW signatory contractor AES Electrical, which in January sued Trump’s Washington, D.C., hotel for $2 million in unpaid work done to get the hotel open prior to Election Day.

“He’s saying things that on their face might sound good,” said Newsom. “But he doesn’t once mention that he’s going to rebuild America with prevailing wages, or say that we’re going to be doing projects with local hires or project labor agreements.”

Prevailing wage laws like the federal Davis-Bacon Act require contractors using public money to pay a specific wage and benefit package to workers, based on the most common rate for a trade in a local area. In places where unions are relatively strong, this rate is usually equivalent to the union rate. Such laws protect against the race-to-the-bottom in the highly competitive construction industry.

“We have no faith that he’s going to deal with us in good faith,” said Stedham. “With Davis-Bacon, I can very easily see him sitting at the table with us and trying to cut some deal over this $2 trillion in infrastructure projects where he says, ‘That’s got to go.’” Sherk, now positioned as one of Trump’s top labor and economy policy advisers, authored a screed against prevailing wages titled “Why the Davis-Bacon Act Should Be Repealed.”

“He’s already cut back on OSHA reporting and safety,” said Stedham. He doesn’t like the president’s sexism, either: “I have a wife and two teenage daughters, and I don’t want them to grow up in this country with this president and his cabinet.”

Local 569 members are also concerned about Trump’s position on climate change. “We do a lot of work related to renewable energy—solar, geothermal, wind,” said Newsom. Many members have been working in the Imperial Valley, east of San Diego, installing desert solar arrays. “When you have a presidency that denies that climate change exists, and is actively trying to seek the end of the Environmental Protection Agency, we’re very concerned,” she said.

Stedham is sympathetic to union locals near proposed pipelines like Dakota Access and Keystone XL, though he personally opposes both. “I understand those locals,” he said. “They need to pursue work, and that’s their in-house discussion. But I don’t think that we should chase work just for the idea of getting work. We need to be responsible. I think we have to be socially and environmentally conscious when we pursue work.”

How can we expect our union leadership to under