Let's Make This a May Day to Remember 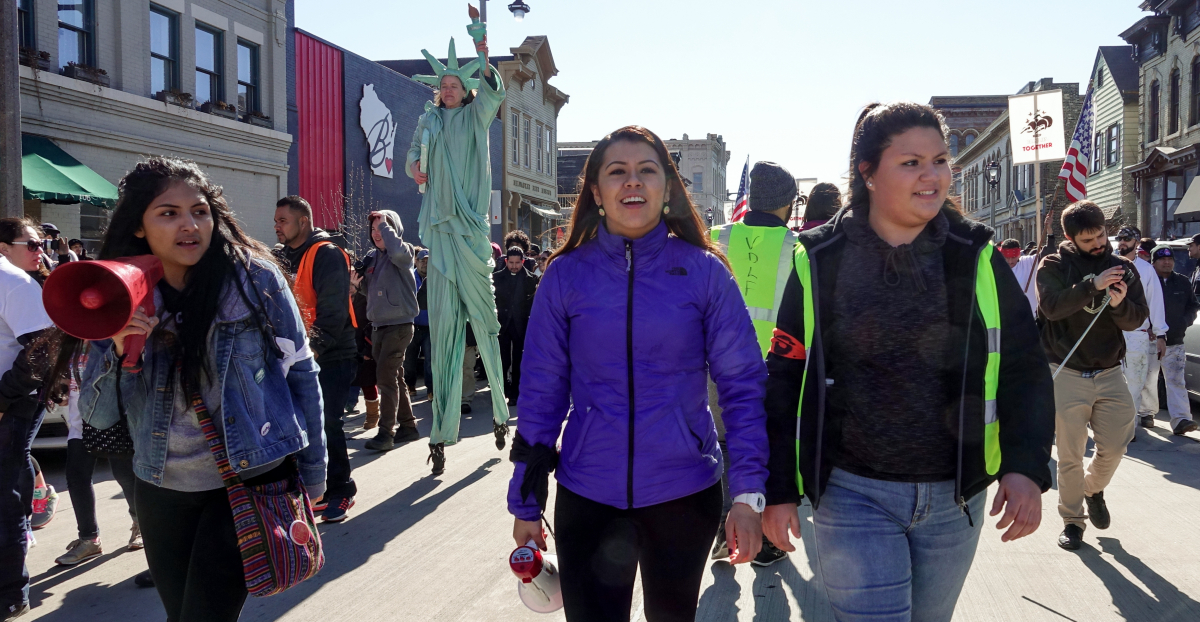 The remarkable “Day without Immigrants,” when tens of thousands walked out February 16, sprang from the grass roots with little coordination by unions or worker centers. But to their credit, many groups are now looking to build on that momentum with strikes and protests May 1.

Our April cover story "Momentum Builds for May Day Strikes" gives a taste of what unions in L.A. and Seattle are planning. This year’s May Day, a traditional date for immigrant and labor activism, looks to be the biggest since at least 2006.

The Food Chain Workers Alliance represents 300,000 workers on farms, in factories, trucks, and warehouses, and at grocery stores and restaurants. Its worker center and union affiliates, including UFCW Local 770, UNITE HERE’s Food Services Division, and Teamsters Joint Council 7, are all planning May 1 actions and strikes, and are talking with employers about how workers with contracts in effect can still participate.

The Pioneer Valley Worker Center, an Alliance affiliate in Massachusetts, will use May Day to push for the Safe Communities Act, a bill in the legislature that would ensure due process rights for detained immigrants and ban police in the state from participating in immigration enforcement. A march will end at the city council meeting in Springfield, where the mayor has vowed not to become a sanctuary city. To get a jump on any efforts to retaliate against workers for striking, the worker center is asking farms and restaurants to close on May Day.

In Washington, D.C., members of the worker center Many Languages One Voice voted to join the call for a strike—and made a video on the spot to explain why. They’re planning a community meeting to get feedback on their strike plan, followed by trainings on how to get together with your co-workers and talk to the boss.

FIGHTS ON MANY FRONTS

Challenging the attacks on undocumented workers will be a major theme, but May Day actions will reach beyond immigrants too. The Movement for Black Lives, coordinating with the Food Chain Workers, is planning a big mobilization on racial justice themes, with details to be announced April 4.

San Francisco-area organizations have formed an alliance called Bay Resistance that’s mobilizing for May Day, but also building relationships for the long term. A recent organizing training drew 1,300 people, who learned not only how to respond to immigration raids but also how have organizing conversations with neighbors and co-workers. So far the network has mobilized to oppose the Muslim ban and the withdrawal of federal guidelines to protect transgender students.

“The attacks are going to come down on so many fronts, and so many people’s lives are in jeopardy under the new administration,” says Kung Feng of San Francisco Jobs with Justice, one of the network’s conveners. “We said, ‘Yes, let’s do rapid response, but let’s do it in a way where we are all defending each other.’”

These examples show organizations finding creative ways to connect their fights and back each other up across movements. Unions should be at the table too.

Can you join efforts already being planned in your area? If you’re in a contract fight, is there a way to line up your campaign for a May 1 action? It’s not just about striking; a red T-shirt day with wide workplace participation means more than a “strike” that’s mostly media hype.

But if you can pull off a one-day strike, all the better. Participants will learn more from the experience of walking off the job than they would attending a hundred workshops—and May Day strikes by union members will send a powerful message that labor is part of this movement too.

Sonia Singh is a staff writer and organizer with Labor Notes.sonia@labornotes.org

Alexandra Bradbury is the editor of Labor Notes.al@labornotes.org
Related
Union Hopes High as Chileans Rewrite Anti-Labor Constitution »
Defying Police Violence, Strikers across Colombia Are Demanding Transformational Change »
Los Deliveristas Speak: How Delivery Workers Are Organizing to Take On the Apps »
Can a Driver Uprising Make Food Apps Deliver? »
'If the Military Leaders Win, There Will Be No Unions': Myanmar Garment Workers on the Strikes Against the Coup »