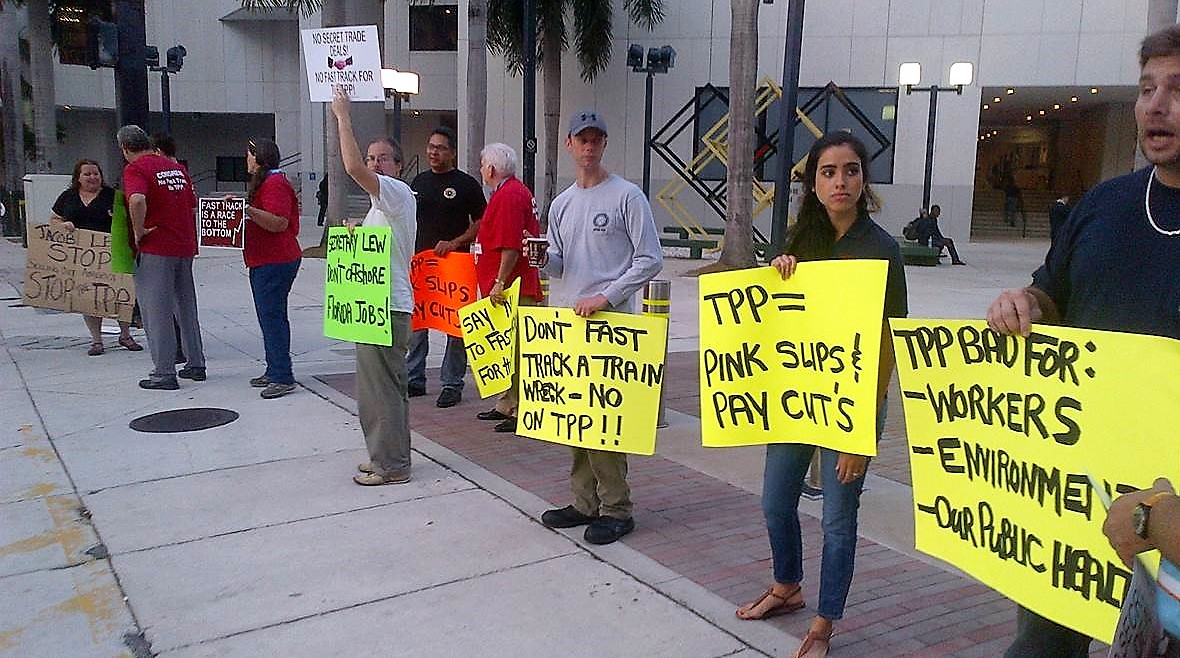 Trump's rhetoric against NAFTA and the Trans-Pacific Partnership seems to echo labor’s longstanding criticisms of these so-called free-trade deals. But does that mean his trade policies will benefit workers? Photo: Stop FastTrack (CC BY 2.0)

President Donald Trump claims he will use international trade policy to bolster the middle class and reduce income inequality.

“The great American middle class is disappearing,” he wrote for USA Today during his campaign. “One of the factors driving this economic devastation is America’s disastrous trade policies.”

That rhetoric resonated with many of the disaffected and downwardly mobile workers who had voted for Democrats in past elections. It seemed to echo labor’s longstanding criticisms of so-called free-trade deals.

But while Trump’s proposals for high tariffs might sound good, he plans to combine them with policies that further weaken unions. That means his trade policy reforms will end up increasing corporate profits without improving wages for U.S. workers.

Trump’s combination of trade protectionism and antiunion policies has a clear historical precedent. The U.S. government pursued the same policy mix during the late 19th century.

That was a period when high tariffs on imports and the repression of labor led to the rise of wealthy industrialists, extreme income inequality, and a Gilded Age that left most workers behind.

How do high tariffs affect wages? It depends on conditions in the labor market.

Tariffs encourage companies to produce more goods at home—but increased production does not always lead to higher wages. When unemployment is high, as it is today, it’s easy for companies to hire more workers without raising pay.

The best way to ensure profit-sharing in such sluggish labor markets is to empower unions to bargain. A closer look at American history demonstrates that workers only shared in the benefits of trade policy reforms when they were able to organize powerful unions.

During the 1880s, the U.S. steel industry gave rise to the strongest industrial union in the world—the Amalgamated Association of Iron and Steel Workers (AA).

But such profit-sharing ended quickly after the union faced employer repression. In the infamous Homestead steel strike of 1892, the AA was violently crushed by Pinkerton detectives hired by the largest union employer, Carnegie Steel.

Once the union was defeated, high steel tariffs still meant higher profits for employers—but no longer for workers.

UNIONS ARE THE KEY

American manufacturing has not always needed trade protection to prosper.

In the 1920s and 1930s, the American steel and auto industries began to dominate global markets. After World War II, an American export boom flooded Europe with U.S.-made goods. During those years, American companies regularly lobbied for free-trade policies that would further boost exports.

But exports and free-trade policies did not automatically benefit U.S. workers, either. Exports generated massive profits for American companies that often paid low wages and refused to recognize unions.

On these grounds, the Congress of Industrial Organizations (one of two union federations that later merged into the AFL-CIO) rejected free trade during the late 1930s and focused on organizing stronger unions. It was not until the New Deal and major labor victories in the early 1940s that unions won contracts and shared in the trade policies that benefited their industries.

Trade policy reforms—whether free trade or protectionism—can generate profits for American industries. But those profits are only shared with workers if they are organized into powerful unions.

U.S. manufacturing now faces low-wage competition from around the world. A return to high tariffs may increase profitability, but will it increase wages?

Today, U.S. workers once again lack the necessary union power to benefit from trade protection. Only 11 percent are union members—about the same ratio as on the eve of the Great Depression.

This decline has contributed to stagnating or declining real wages for the majority of the population—including nonmembers, who once benefited generously from a spillover effect of high union density.

Since the 1970s, as union strength has fallen, income inequality has grown.

Trump and the Republican-controlled Congress are pushing to weaken unions even further, with a national “right-to-work” law for the private sector and a conservative Supreme Court nominee who will break a tie to impose similar rules on the public sector. The nominee for labor secretary, fast food mogul Andrew Puzder, has a long history of opposing labor laws like overtime pay and minimum wage increases.

Even Trump’s recent efforts at the Carrier Corporation, where he threatened to use high tariffs to save American jobs, weakened unions. Trump publicly attacked the local Steelworkers president and excluded the union from his negotiations with the company.

Reflecting on the deal, AFL-CIO President Richard Trumka expressed growing concern that “Mr. Trump’s strategy to keep jobs in America relies on busting unions, keeping wages down, deregulating everything in sight, and cutting taxes for the wealthy.”

WORSE OFF THAN TODAY

The writing on the wall is clear: Trump’s current trade policy proposals will not benefit workers because they are coupled with labor policies that weaken unions. His nomination of Puzder, his exclusion of unions from trade policy discussions, and his party’s antiunion legislative agenda all stand in the way of a positive outcome for workers.

A president who truly intended to help workers should also support proposals that strengthen unions. One such policy would tie worker migration to union membership, as the labor lawyer Jennifer Graham has proposed. Workers could migrate to the U.S. under the condition they join a labor rights organization that enforces high standards for both migrants and native-born workers.

The Trump administration, however, is pursuing nearly the opposite path. It has devised an economic strategy that will leave workers worse off than they are today.

Adam Dean is an assistant professor of political science at Middlebury College. His book From Conflict to Coalition: Profit-Sharing Institutions and the Political Economy of Trade was recently published by Cambridge University Press. Jamie McCallum is an assistant professor of sociology at Middlebury College. His book Global Unions, Local Power, published by Cornell University Press in 2013, covers worker campaigns across national borders.

Related
A New Union, At Last? Mexican Auto Parts Workers Get to Vote, Three Years After Strike Wave »
Labor Must Rise Against Vaccine Apartheid »
Captured by the Flag »
Viewpoint: Will Your Local Union Sign On to Ask the WTO to Waive Patents on Covid Vaccines? »
Workers and Unions Must Remain Vigilant to Prevent Trump from Delegitimizing the Election, and to Stop Trump’s Desired ‘Coup’ »