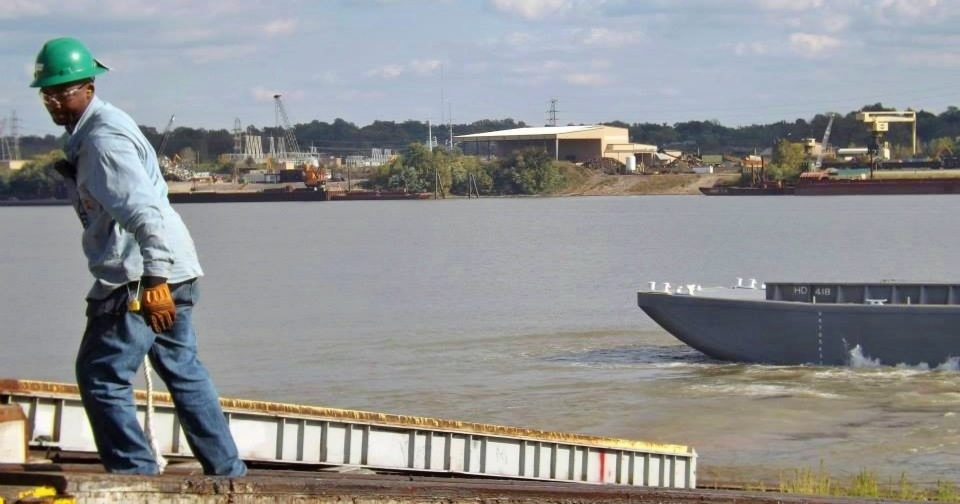 When right to work hit Indiana in 2012, it didn’t have much impact at the Jeffboat shipyard. Out of 700 workers, said Teamsters Local 89 Business Agent Jeff Cooper, “I believe we only have one person that’s dropped out." Photo: Teamsters Local 89

Plenty of union officers are justifiably worried about how many members will quit their unions if Congress or the Supreme Court imposes “right to work” conditions on the whole country.

But when right to work hit Indiana in 2012, it didn’t have much impact at the Jeffboat shipyard in Jeffersonville. “I believe we only have one person that’s dropped out,” said Teamsters Local 89 Business Agent Jeff Cooper. That’s one out of 700.

The Jeffboat story might reassure you—because their secrets to maintaining membership aren’t expensive or complicated. The union has a deep bench of stewards who seek out and address workplace problems. Because members strike when necessary, they’ve won good wages and health insurance that make the value of the union contract self-evident. And they’re systematic about asking new hires to join.

The shipyard stretches a mile and a half along a riverfront. It’s a tough place to work—hot in the summer, cold in the winter, wet when it rains. Much of the work is done in confined spaces.

And it’s dangerous. Chief Steward Ronnie Waiz, nearing retirement after 48 years on the job, can rattle off the exact date and time of each workplace fatality. Two men fell to their deaths in 2010; one was crushed in 2011.

“They’re very painful even to talk about,” he said. “I feel responsible for every employee in this yard.”

Especially since those tragedies, safety is a main union focus. Local 89’s 33 stewards join area safety meetings and walk around to “talk it up,” Waiz says: “They ask people if they have problems, and try to solve their problems. If they can’t get them fixed with their supervisor, it moves to the next level. If they can’t work it out, it goes to me.”

Local 89 has negotiated the right to spend 30-45 minutes orienting all new hires—with the boss out of the room. It’s usually Waiz who makes the presentation.

“Ninety percent of them are first-time union people,” he says. So he starts from square one, explaining how the contract works, how much dues are, who will be your steward, and what you get out of union membership. He asks each one to sign a card and authorize dues checkoff.

“If you don’t join the union, I still have to represent you,” he tells new hires, “but it would be to your benefit to join, because [otherwise] you don’t get to vote on contracts, you don’t get to enter the union hall. I think it’s the best thing for you and your family.”

During strikes, Jeffboat’s attorneys have encouraged a handful of members to drop out and cross the picket lines. But Waiz, who never gives up on his co-workers, has won them back afterwards.

One who crossed in 2010 did it because his wife was pregnant and needed the insurance. “I said, ‘You should have come to me. I could have helped you get insurance,’” Waiz said. “He said, ‘I didn’t think of that.’ But he has since come in, and he is a strong union member.”

YOU’VE GOT TO FIGHT

Several strikes, including a wildcat, have forced Jeffboat to respect workers’ power. In 2006 the company tried to decertify the union.

But after that failed, Jeffboat “decided they wanted to get along,” Cooper said. The parties negotiated a contract in 2007 with a big pay increase. On day-to-day matters, management got easier to deal with.

Still, workers went on strike again in 2010. Jeffboat wanted to raise their share of health care costs from 10 percent to 20. After a five-week strike, “they ended up coming to us and saying, ‘Okay, fine, you’re right. We’ll give it to you,’” Waiz said.

Members still pay 10 percent. “We’ve got the best insurance in southern Indiana for a company our size,” Waiz said. “At Ford Motor and GE, they wish they had ours.

“Sometimes you’ve got to stand up and fight for what you think’s best.” That’s what makes workers loyal to their union.

For more on building a strong union in a right-to-work environment, see Five Steps to Maintain Unity and Membership Under Right to Work. For help getting your union prepared, email training[at]labornotes[dot]org or call 718-284-4144.

Alexandra Bradbury is the editor of Labor Notes.al@labornotes.org
Related
Richmond Educators Are First In Virginia to Win Bargaining Rights »
Steward's Corner: Helping New Stewards »
'It's Different Here' Is No Excuse »
Janus for the Rails and Air? »
Why Missouri 'Right to Work' Went Down in Flames »