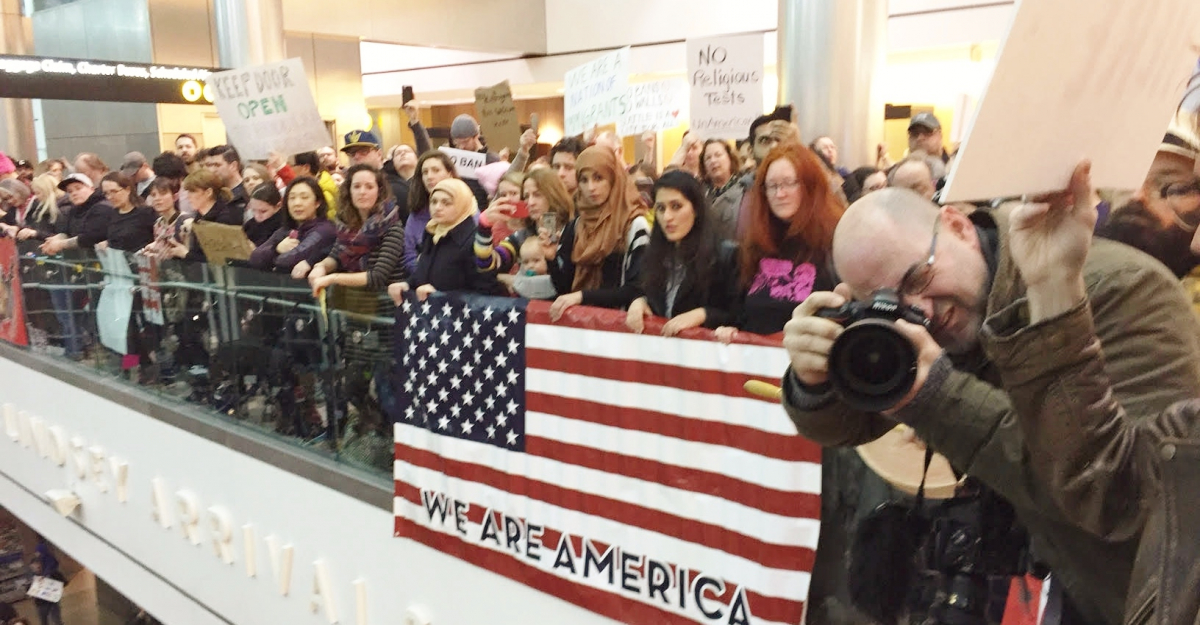 The same judge who blocked Trump's travel ban had previously denied airport workers their right to strike for fear of disrupting airline business. On January 28 we didn’t just threaten disorder at the airport—we went ahead and created disorder, and it worked. Photo: Jonathan Rosenblum

When I first heard the good news on February 3 that U.S. District Court Judge James L. Robart had slapped a restraining order on Trump’s travel ban, I texted a labor attorney friend: “Goodness—Judge Robart! Am I obliged to like him now?”

You see, while millions of people are applauding Judge Robart for upholding the Constitution and blocking xenophobia, some of us have had a very different experience in his Seattle courtroom.

Back in 2012, SeaTac Airport workers were hauled before him by attorneys for Alaska Airlines and the Port of Seattle. By the time they left Robart’s court, they had been stripped of basic workplace rights.

The 80 aircraft fuelers were part of the famous SeaTac Airport campaign, which in 2013 won the first $15 minimum wage initiative in the nation. But a year before that momentous vote, the fuelers had grown sick and tired of shoddy and abusive working conditions: leaky fuel nozzles, broken ladders, faulty brakes on 10,000-gallon fuel trucks, doors and windshield wipers that didn’t work, and in one case a transmission gearshift that was held together with duct tape.

The fuelers testified about these appalling conditions before the airport commission and to the media. After the fueling company, ASIG, suspended the most outspoken fueler, Alex Popescu, the workers marched into their boss’s office. Flanked by local religious leaders, they announced they were ready to go on a one-day protest strike.

DENIED THE RIGHT TO STRIKE

ASIG, supported by Alaska Airlines and the Port of Seattle, promptly filed for an emergency restraining order against any strike. Their lawsuit named Popescu, the workers, Working Washington—the labor coalition leading the SeaTac campaign—and me as the campaign director. The companies asked the judge to ban any fueler strike because it would “have the effect of disrupting the commercial airline operations at Sea-Tac—and throughout the country—on a massive scale.”

Judge Robart wasted little time in issuing his restraining order, and he didn’t stop at banning strikes. Robart also barred workers from other collective action, even things they hadn’t yet considered, such as a work-to-rule campaign where workers would assiduously follow ASIG’s precise work rules and procedures.

Robart’s ruling cast a pall over SeaTac and beyond, raising doubts about the basic rights of airport workers in the U.S. Thankfully, the decision didn’t stand. But it took two and a half years of legal appeals before his damage to airport workers’ rights was undone by an appellate court.

So it’s ironic to read report after report extolling Judge Robart for his compassion, insightful jurisprudence, and respect for the legal rights of the downtrodden. Was that really what motivated him? I believe that as he read out his decision on February 3, Robart was keenly aware of the remarkable events of the prior week.

Like many of you, I was not expecting the sudden flurry of social media messages on Saturday evening, January 28, the first full day after Trump’s travel ban order: “Get down to the airport for the rally.”

Rally? Nothing had been scheduled. But as word leaked out across the country that travelers were being detained at U.S. airports, stripped of their visas, and sent back to foreign countries, people mobilized.

My wife and I hopped into our car and headed for SeaTac, with our daughters sketching handmade signs in the backseat. We got to the Arrivals Hall shortly after 5 p.m. and joined a circle of about 150 people. As people poured in from all directions, within minutes the crowd swelled to 500, then 1,000, then a few thousand. Then we stopped trying to estimate.

Passengers merged in, towing their wheeled luggage. Seattle City Councilmember Kshama Sawant arrived and led a boisterous, chanting march through the terminal, culminating in a mass sit-down in front of the security line—in direct violation of the airport’s rules, of course.


The crowd of protesters at SeaTac Airport soon swelled into the thousands. Photo: Jonathan Rosenblum

Congresswoman Pramila Jayapal joined the rally briefly to announce that two passengers detained at SeaTac had been given legal counsel and wouldn’t be deported. People checked their Twitter feeds and announced the spontaneous rallies at airports across the country: Denver, Philadelphia, Houston, LAX, and JFK, (where taxi workers also went on strike, shutting down traffic at the international terminal).

What happened that day is that thousands of people dropped their plans for dinner, movie night, work, or study to mass at transportation centers in defense of people they had never met. They came out because of what was at stake—not just the status of foreign travelers, but our society’s core values. In the echoing halls of airport terminals from coast to coast, a spirit of resistance and humanity came alive.

Combined with the fast actions of civil rights and immigration lawyers, it was these protests surging into the national news that secured the weekend release of detained travelers and set the Trump administration back on its heels.

Did Judge Robart watch the TV coverage of the unfolding drama at SeaTac and other airports? I suppose we’ll never know for sure. But it’s hard to imagine he was unaware.

We’re taught that justice is blind, that judges reach their conclusions only by examining the facts presented in court. That’s rubbish. Judges are people too, with their own biases. They know their place in the power hierarchy, and they reliably side with big business over labor.

Faced with the threat of airport fuelers creating turbulence for travelers and airlines in 2012, Robart—appointed to the bench by President George W. Bush—ruled emphatically that “the law does not permit these employees to strike.”

But the demonstrations on January 28 were different. We didn’t just threaten disorder at the airport—we went ahead and created disorder. By stepping out in such large numbers, by sitting down in front of the security lines, by breaking laws and upsetting normal operations, we showed the White House, Congress, federal judges, and airport commissioners that we would disrupt commerce with mass civil disobedience.

It’s easy to imagine why Judge Robart, seeing the spreading uprising, would conclude that a restraining order against the Trump travel ban was needed—not just for the sake of the Constitution, but to tamp down the insurgency and restore stability for airport businesses.

The 80 workers who threatened to cease fueling aircraft at a single airport in 2012 were a problem that Robart could solve with the legal powers at his disposal. But he couldn’t temper the moral force of thousands of people united in disruptive actions at airports around the country.

His decision to restrain Trump shows that civil disobedience and mass resistance still have power. That’s an important lesson as activists debate plans for work stoppages or other disruptive actions on International Women’s Day, on May Day, or beyond.

I’m glad Judge Robart reached the right conclusion. But I’m even more grateful that outraged people across the country stopped whatever they were doing and came together in a sudden, militant mass movement. Those airport marches showed us all the kind of fight we will have to wage against Trump—and our tremendous power when we do.

Jonathan Rosenblum is a union and community organizer living in Seattle, and a member of the National Writers Union (Auto Workers Local 1981). He is the author of Beyond $15: Immigrant Workers, Faith Activists, and the Revival of the Labor Movement, published by Beacon Press, available March 14.