SeaTac's Fight for 15: Why Faith Was Key 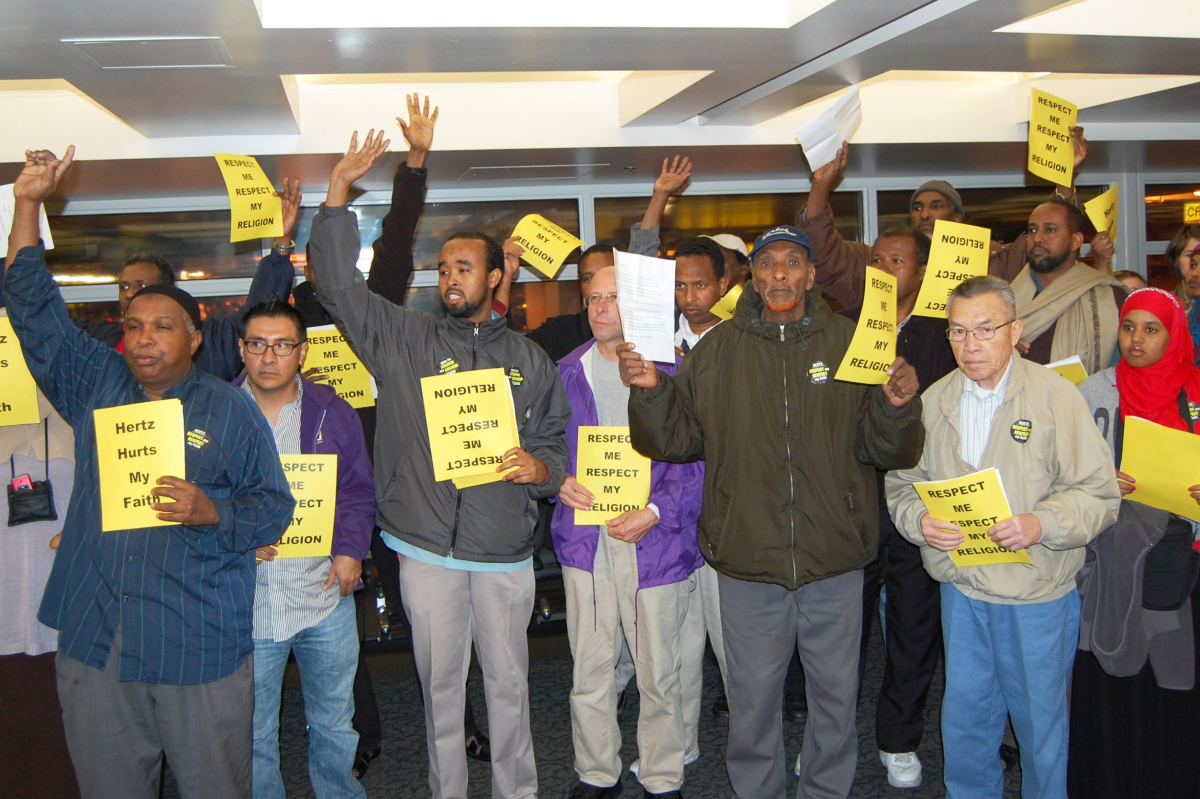 The fight for a $15 minimum wage in SeaTac, Washington, only blossomed after union and community allies stepped beyond their comfort zones, uniting behind a cause that had nothing to do with fair pay. Photo: Teamsters Local 117.

But the fight didn’t take root over wages. It only blossomed after union and community allies stepped beyond their comfort zones, uniting behind a cause that had nothing to do with fair pay.

When organizers from the Service Employees (SEIU) and the Teamsters first began reaching out to airport workers in 2011, we faced a big challenge. The single largest group of low-wage airport workers hailed from Somalia. While their conditions were lousy, they weren’t quite ready to trust us.

In the past, unions weren’t seen as particularly responsive to African workers, especially Muslim workers. For instance, in 2003 Hertz Rent-a-Car had suspended a group of Somali rental car shuttle drivers when they went to pray during Ramadan.

But the workers didn’t get the help they needed from their union, the Teamsters. Instead, an immigrant rights group filed a discrimination complaint on their behalf, got their jobs back, and secured their right to religious expression.

THE RIGHT TO PRAY

For Muslims daily prayer is obligatory—it’s one of the five pillars of Islam. Ritual prayers last but a few minutes, hardly causing a blip in operations.

After the 2003 suspensions and legal action, Hertz management had agreed to accommodate the workers, treating prayer breaks like smoke or bathroom breaks: just take it and then come back to work. In bargaining with the Teamsters, they agreed that no clock-out was necessary. They even provided a spare room for prayer.

But when workers went to pray on the last Friday in September 2011, the manager told them to clock out. Shuttle driver Zainab Aweis recalled her manager standing with his arms extended, blocking workers who were trying to get into the prayer room. “If you guys pray, you go home,” he declared.

For Aweis, it was an easy choice: she went to pray. “I like the job,” she said. “But if I can’t pray, I don’t see the benefit.” While money mattered, faith was not negotiable.

Again the workers appealed to their union, Teamsters Local 117. Given the anti-Muslim hysteria in this country, Teamsters leaders might just have responded with low-profile activities, like filing a grievance.

But instead, the Teamsters took a stand. They organized a multi-faith pray-in at the Hertz counter and invited the media. Muslims, Christians, and Jews joined union and community activists, praying while holding signs that read, “Respect me, respect my religion.” Union officers and the Hertz shop steward went on national news shows. They brought in lawyers.

Hertz fought back, conceding the workers’ right to pray but insisting on maintaining the suspensions. But union leaders held the line, arguing that the company had violated a principle of collective bargaining. If Hertz wanted to change the break policy, it would have to bargain with union members first.

Essentially the union leaders said that Muslims’ right to pray to Allah isn’t just a Muslim issue. It’s a labor movement issue, because it’s about workers’ right to honor their cultures and traditions—and to have some say over break time.

Other airport workers—largely new immigrants—saw what happened at Hertz, and concluded that the union would fight for their broader interests.

Two years later, as the union organizing campaign pivoted to the $15 ballot initiative, we registered more than 900 new voters in SeaTac, almost all new immigrants or the children of immigrants—boosting the voting population in this small city by 9 percent. Probably more than 200 were registered outside Friday prayers.

We won the ballot initiative by 77 votes.

Why did union leaders make the Hertz suspensions a public fight? Aware of public hostility to Muslims, they could have chosen a more pragmatic course. Simply filing a grievance would have fulfilled the union’s duty to represent members, without calling attention to controversy.

But instead union leaders acted on instinct: a principle had been violated, and a strong response was called for. Even if there were negative consequences, it was a just cause.

By inviting leaders of different faiths to rally at the Hertz counter, the union connected the dots between religious freedom and the secular union principles of anti-discrimination and due process.

The fight became not just a workplace concern, but a community-wide issue of rights and freedom. The union stepped out of a role of just representing dues-paying members and into a role embracing broader values.

Somali community leaders were forced to stretch as well. They came to see the Hertz workers’ right to pray not just as an issue for Muslims, as in 2003, but as part of a bigger public fight for union rights and broad change, at the airport and in the surrounding community.

Teaming up with the union meant folding into a campaign that was taking on the region’s major economic and political powers—not just Hertz, but Alaska Airlines and the Port of Seattle. For an immigrant community that preferred to stay out of the limelight, particularly after 9/11, this too required people to step outside their comfort zones.

Ahmed Ali, a colleague of mine at Working Washington, observed that the Hertz pray-in recast the airport fight from material economic issues—a familiar terrain for union organizers—to freedom and rights, values that transcend organizational and even religious lines.

“As organizers, we go out and try to find issues, things that workers care about changing,” Ali said.

But we can end up defining issues narrowly, like “getting our breaks.” That’s a mistake. It’s values—the underlying core beliefs we hold, like justice, human dignity, freedom of speech, and faith—that are foundational, providing direction and meaning to our lives.

Ali concluded that “if you stick only to issues and not values, then there’s nothing that will hold us together in the long run.”

In the Hertz fight, once union and community leaders stepped outside their customary roles to build unity based on shared values, the possibility for movement-building opened up. And in doing so, they laid the foundation for the historic $15-an-hour ballot win.

Jonathan Rosenblum, a union and community organizer, was director of the SeaTac Airport campaign for Working Washington. He is writing a book about the future of the U.S. labor movement, based in part on his experiences with the SeaTac campaign. He can be reached at jonathanr4212[at]gmail[dot]com.

A version of this article appeared in Labor Notes #435 June 2015. Don't miss an issue, subscribe today.
Related
Pandemic Discrimination Against Asian Americans Has Long Roots »
Book Review: A History of America in Ten Strikes »
Beyond $15 at Amazon »
Ontario Workers and Students Notch Biggest $15 Win Yet »
What We're Reading »