A Network You Can Trust 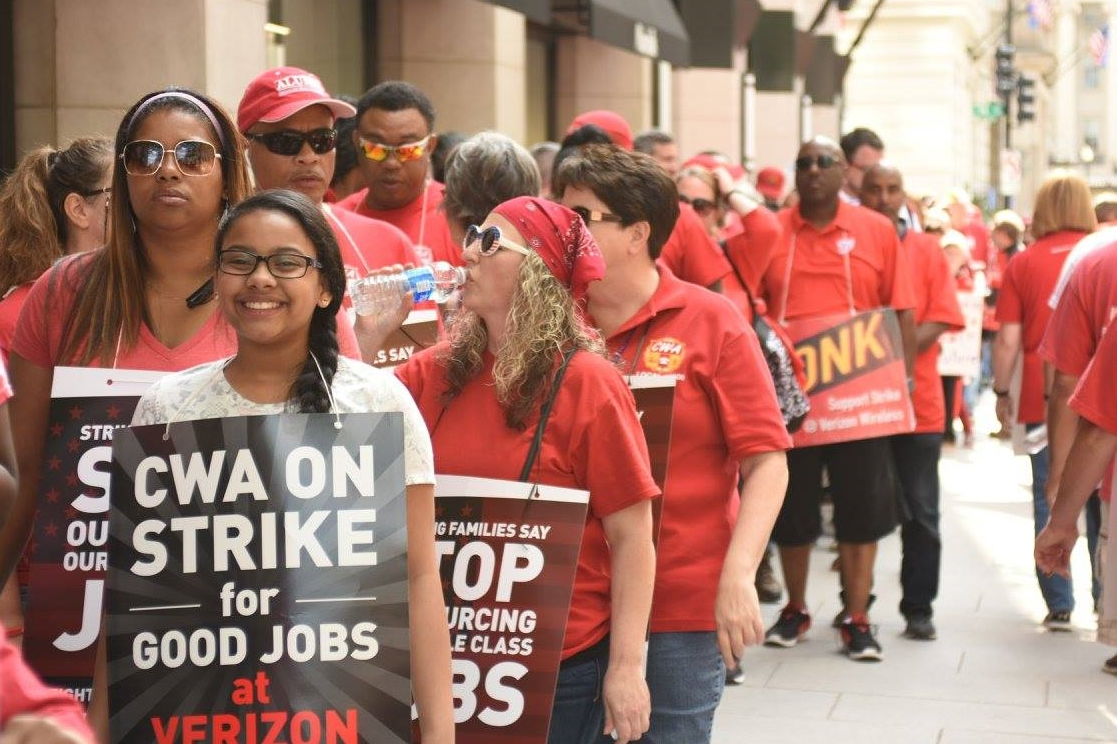 The Verizon strike is both a test and an opportunity for the whole labor movement. Photo: Communications Workers of America

A strike like this is both a test and an opportunity for the whole labor movement. Will we rise to the occasion and back our striking brothers and sisters at Verizon with food, donations, and boots on the picket lines?

Will we take full advantage of this all-too-rare chance to show members of every union what power feels like—with 40,000 workers on strike, in a strategic sector, from Massachusetts down to Virginia?

It’s great to see local unions and community organizations out picketing Verizon Wireless stores. In San Diego, 150 members of Communications Workers (CWA) Local 9509 took the streets with a whole percussion ensemble. In Tulsa, Local 6012’s picket was the lead story on both the ABC and NBC six o’clock news.

And the strike is spurring the types of cross-union and community-labor solidarity that are vital to our movement’s future.

A COALITION IS BORN

At an office complex where Verizon has a call center in Lowell, Massachusetts, janitors came together with strikers for a joint rally.

Like the strikers, these janitors have been without a contract since last summer. They’re also fighting for back wages, after they were laid off for seven months when a new cleaning contractor took over.

The Verizon strikers and janitors have a common theme—making sure that “as technology evolves, we don’t lose the vision of ensuring good jobs,” said Service Employees Local 32BJ Vice President Roxana Rivera.

“The solidarity meetings brought a lot of us together in the same room, brainstorming about how we can support the strike,” said Pat Kane, a board member of the New York State Nurses. “That conversation went on to, ‘We need to create something that lives on. We shouldn’t just come together during a crisis.’”

The member groups of this new coalition have begun by visiting each other’s meetings to learn about each other’s issues. They’re gearing up for a big Solidarity Social and People’s Picket outside a Verizon Wireless store on June 3.

FUEL TO THE FIRE

Meanwhile in Port Chester, New York, strikers have come to the aid of Firefighters Local 1971, whose members are fighting to get their jobs back after the village board unexpectedly voted to ax all eight of its career firefighters.

CWA Local 1103 has lent the firefighters space in its office. Local 1971 members table outside the local every day, collecting signatures for a referendum to let Port Chester residents decide the fate of their fire department.

Verizon strikers even phonebanked 800 area union members, asking them to support the referendum and join a pro-firefighter rally at the town hall. In turn, firefighters from Port Chester and surrounding towns have been a regular presence at Verizon pickets.

Verizon executives can’t be happy to see these types of solidarity. Even as he pulls in $18 million a year himself, CEO Lowell McAdam wants to convince the public that his employees are selfish and overpaid.

Every act of solidarity cuts against that message, showing that this is everyone’s fight.

So get out to those picket lines and rallies. (If there’s no picket near you, the unions are urging groups across the country to organize their own, outside Verizon Wireless corporate stores.) Donate food or money. Get your union or organization to adopt a store for weekly picketing. Invite a striker to speak at your union meeting or workplace. Build a local cross-union solidarity committee.

The more of us who do, the better off we’ll all be.

For more info, visit standuptoverizon.com or verizonstrikesolidarity.org. For info on adopting a store, copies of a model union resolution, or with other questions, email vzsolidarity[at]gmail[dot]com.

Want to tell us about your strike solidarity actions? Email dan[at]labornotes[dot]org.