Viewpoint: The Flint Water Crisis from the Ground Up 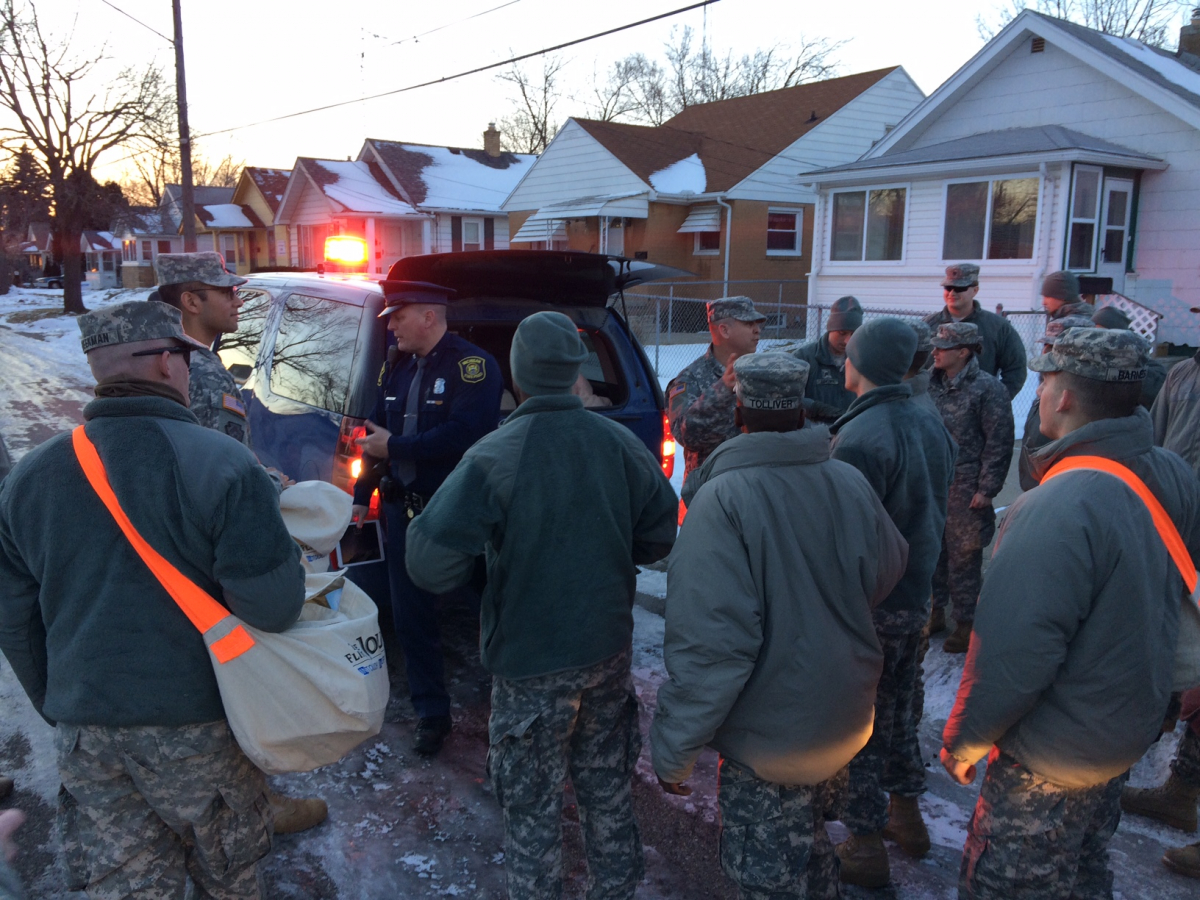 It's like living in "some sort of a dystopian novel," Sean Crawford writes, to find National Guard troops going door to door delivering drinking water on his street. To skimp on water costs, the governor and dictatorial emergency manager exposed the whole city to lead poisoning. Photo: U.S. National Guard Maj. Joe Cannon/Released, CC BY 2.0.

What has come to light in Flint, Michigan, over the last few months is scarcely believable. My entire city has been poisoned with lead by the criminal negligence of its very own government!

As if in some sort of dystopian novel, I leave my house to see the Red Cross providing disaster relief on my street. Down the block, a half-dozen National Guard Troops hand out rations of that oh-so-important, scarce commodity: clean drinking water.

My hometown of Flint has been known for many things through its history. First as the birthplace of General Motors, and subsequently as the battleground of the Flint Sit-Down Strike that formed the United Auto Workers.

That gave rise to a wave of union organizing across the country, and to the middle class. The quality of life that Flint residents struggled for and enjoyed was once the envy of the world.

More recently, Flint became famous as ground zero for the disastrous consequences of corporate globalization―chronic unemployment and underemployment, increasing wealth inequality, and the violence and destabilization that can happen in a community when companies are allowed to destroy people’s livelihoods.

These problems aren’t unique to Flint. But our city is a prime example of how the poor and working class are treated as disposable commodities―setting the stage for the current water crisis.

It would be one thing if those responsible for this crisis were democratically elected officials. We could just vote the bums out, right? Well, that isn’t the case in my hometown.

Through a bill called P.A. 436, better known as the Emergency Manager law, Governor Rick Snyder appoints an “emergency manager” who answers to the governor and the governor alone.

The emergency manager has the power to dismantle everything from local laws to public sector union contracts. All the local officials who were voted in, and all the public sector workers, are under the control of this state-appointed dictator.

It was the Snyder-appointed emergency manager, Darnell Early, who initially switched Flint over from the long trusted-source of Lake Huron water, provided by Detroit, to the more corrosive water of the Flint River. It was the Michigan Department of Environmental Quality, also answerable solely to Snyder, that deemed the move safe.

This was only intended to be a temporary measure, but it didn’t take long for the damage to be done. The aging pipes in Flint were leaching lead into the city’s drinking water and into people’s homes. An entire community was poisoned, just like that.

There is no safe level of lead; lead damage is permanent and irreversible. It can cause a staggering array of physical and behavioral problems, from lower IQ to miscarriages.

To add insult to injury, the emergency manager in his infinite wisdom raised water rates to astronomical levels. So we’re paying $100-plus per person, per month, for water that is basically poison and practically useless.

What’s more, there’s evidence that Michigan Department of Environmental Quality documents were altered to get approval for the switch to the Flint River. Some officials may even have known that the water was contaminated, yet failed to act.

Whether it was out of fear of political or financial reprisal, anyone who knowingly allowed the violation of Flint citizens’ health and safety should be prosecuted to the fullest extent of the law! If a terrorist group or a foreign power had claimed responsibility for such a crime, we’d be at war already.

FLINT IS A LABORATORY

The sad thing is, we’re already at war, and we have been for quite some time.

There’s a reason that, as you travel through many Rust Belt Midwestern cities, they look as though they’d been ravaged by bombs. It’s the one-sided class war being waged by the haves on the have-nots.

For over a generation we’ve succumbed to a sort of economic terrorism that erodes our quality of life, destroys our communities, and denies our children a hopeful future. We’ve hemorrhaged good-paying jobs and had “free trade” crammed down our throats by one administration after another.

Now they’re coming for our most cherished tradition: democracy. Similar emergency manager laws are already sprouting up all over the country. If the poisoning of an entire U.S. city doesn’t wake people up, I don’t know what will.

For too long there’s been a misunderstanding that Flint’s problems are self-made. As if my city went from being one of the richest per capita on the planet, to one of the poorest in the country, by willful choice!

Flint is a laboratory, a place so dispossessed that the right wing feels emboldened to experiment with little fear of repercussions. After all, it’s just the working class, Black people, and poor people who are being hurt, right? People who are constantly objectified as “human resources,” used to make billions, and then conveniently discarded.

People who are used as guinea pigs to see how far you can push citizens in a democracy before they start to push back. Over a thousand people joined a protest at Gov. Snyder's State of the State address, calling for the arrest of those responsible for this debacle. Photo: UAW Local 598.

Despite all this, I’ve been noticing signs of hope.

People from all over the country have been reaching out to show support. In an outpouring of compassion, they’re donating much-needed water and filters. Over a thousand people joined a protest at the State of the State address, calling for the arrest of those responsible for this debacle.

The dull roar of a massive crowd served as the background to the governor’s sheepish words. You could tell he felt humbled by the anger his decisions had unleashed. He should feel ashamed.

Many things need to happen to mitigate the damage. Right now we need bottled water and filters, as well as ongoing lead-level monitoring.

It’s looking as though the entire city’s water infrastructure may even need to be replaced, which has the potential to create a huge number of desperately needed, good-paying jobs for the very same people affected by the crisis.

This project will most certainly take far more than the $28 million band-aid that Snyder just approved. Ironic, considering that the move to use Flint River water was designed to save money! It should show all these hypocrite “fiscal conservatives” that you never cut corners when it comes to public health.

Moving forward, we need a full federal investigation to determine who was responsible and hold them accountable. We also need comprehensive health care for those poisoned by this man-made disaster.

More than anything, Flint and our whole nation desperately need a revitalized movement to ensure that public health decisions―and indeed all decisions of public concern―are made with full democratic scrutiny by those who will be affected.

The project of democracy is in our laps now. Never in my lifetime have I seen such a stark example of the disastrous results of corporate fascism. We need to eliminate these dictatorial emergency manager laws before they poison us all.

Related
New Leadership, New Direction in Major Midwest Teamsters Local »
Instead of Coal, These Nurses Gave Their Boss 900 Documented Incidents of Unsafe Understaffing »
‘We’re Sick of Giving Away Our Future’: An Interview with Kellogg Strike Leaders »
Michigan Nurses Defeat AFT-Backed Raid »
Auto Workers Ask: If We Can’t Win It Now, When Will We? »

Rick Snyder has committed a criminal act in the creation of this mess to begin with, then failed to react to this disaster, and finally his inaction forced the federal government to step in to spend federal money to fix a problem that he created. All this to save 2 million bucks. Well the long term care of these kids and adults could cost 10 fold. Finally Mr. Snider has the nerve to stand up and stated that “the government failed the people –the government does not work”! This is someone who doesn’t want government to work. This at the least malfeasance and if it isn’t a crime should be. Kick this bum out of office.

Someone brought up a great point the other day--when people came to public meetings with jars of brown water and complained--as they did for months and months--if they had been speaking to elected officials, the officials would have scrambled a bit. But they weren't so they didn't.