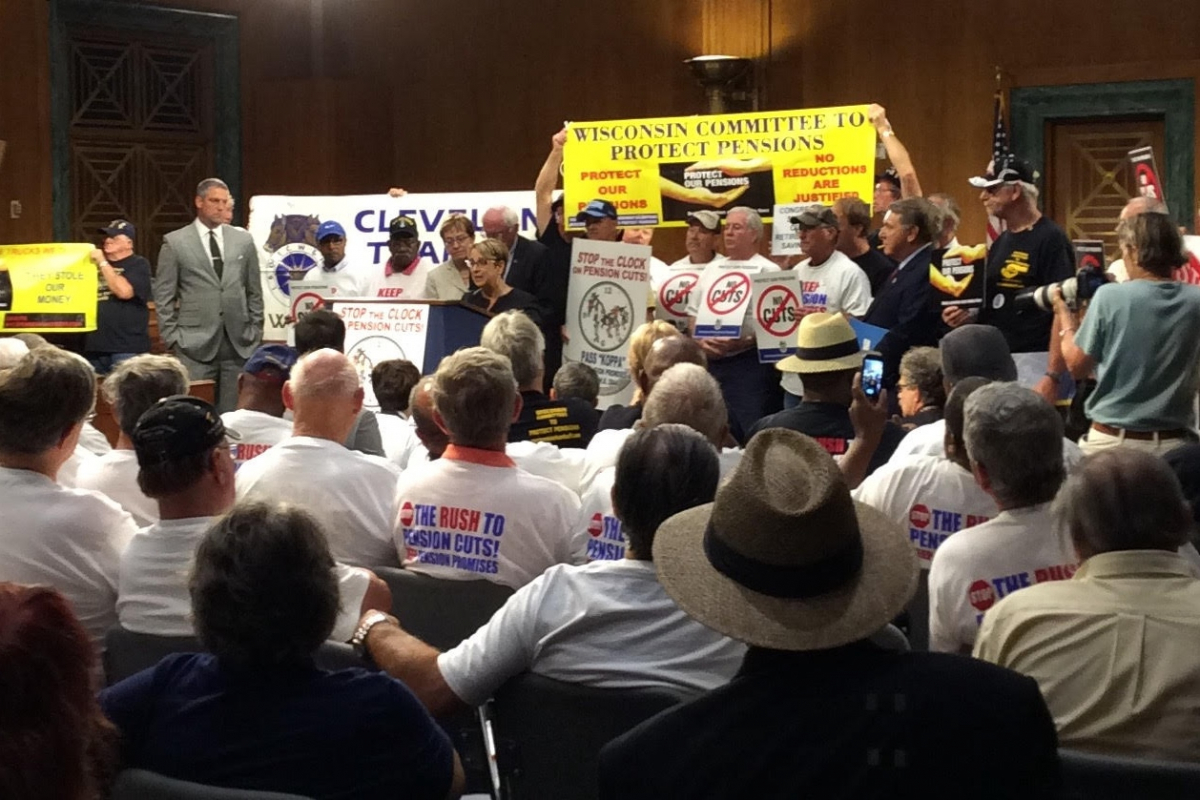 Teamster retirees, spouses, children, and active members journeyed to Washington to protest a new law that will allow some pension funds to cut benefits. Photo: Teamsters for a Democratic Union.

Close to 200 Teamster retirees, spouses, children, and active members journeyed to Washington Thursday to tell the government what they thought of a new law that will allow some pension funds to cut benefits.

They spoke at a Treasury Department hearing, called to take comments on rules that will govern how underfunded plans may propose to cut workers' pensions.

Frank Bryant of Greensboro, North Carolina, now 73, worked for UPS for 31 years. He told listeners that to take away 60 percent of his pension now “would be as unjust as it would have been to steal part of my wages 30 years ago.”

Bryant rode a bus with other retirees to tell the government that its “so-called rescue plan was more like a demolition plan.”

The Teamsters want to repeal aspects of the Multiemployer Pension Reform Act (MEPRA), which Congress passed last December as a last-minute addition to an omnibus government funding bill. Senator Bernie Sanders of Vermont and Representative Marcy Kaptur of Ohio held a press conference Thursday to promote their substitute bill, the Keep Our Pension Promises Act (KOPPA), which would fund ailing multiemployer pensions by closing two tax loopholes used by the rich.

Teamsters are concerned because their mammoth Central States Pension Fund, covering members in 25 states, is in the red. Trustees could now cut pensions from a maximum of around $36,000 to $14,157 a year—and that's for the best-off retirees.

Alex Adams of Cleveland, a 37-year Teamster, has had cancer for eight years. His wife has undergone chemo and is now awaiting radiation. Contemplating pension cuts, he spoke of her $5,000 deductible and the co-pays on his seven medicines.

Adams explained how the MEPRA bill was tacked on to a federal spending bill that was hurriedly passed to keep the government from shutting down. “None of the congressmen had read the bill,” Adams said. “There was no transparency, no hearings. It should have been a stand-alone vote” to put the representatives on record that they favored slicing pensions.

Teamsters at the hearing said they wanted a more user-friendly voting procedure on any cuts proposed by fund trustees, including a pre-paid mail ballot. They objected to language that would tally non-voters as “yes” votes. And they want Treasury to define the role and duties of the legally required “retiree representative.”

Sue Mauren, a retired Teamster officer and representative for President James Hoffa, was appointed by the Central States Fund to this role but thus far has refused to meet with any of the grassroots pension action committees—including the one based in her area, the Twin Cities. She has communicated through a website but has had no known face-to-face meetings with any retirees, nor responded to the thousands of emails and letters she has received. Pension activists are calling on her to support a truly independent audit of the Central States Fund.

The overseer appointed by the Treasury Department, Kenneth Feinberg, was also in charge of 9/11 victim compensation. He listened respectfully to the Teamsters but warned them that the law had already passed. After the hearing he invited pension activists to continue to talk with him informally at a nearby location and said he would make himself available for further meetings once the Central States Fund has issued a proposed plan. He encouraged activists to invite him to visit their areas and meetings.

The North Carolina Committee to Protect Pensions has been “in constant motion all over the state,” Bryant said. “No corner has been untouched. We've gone to breakfast meetings, lunch meetings, dinner meetings with the retiree clubs. We will do it again if necessary.”

Peter Landon is an organizer for Teamsters for a Democratic Union.