Verizon Contract Expires with No Deal In Sight 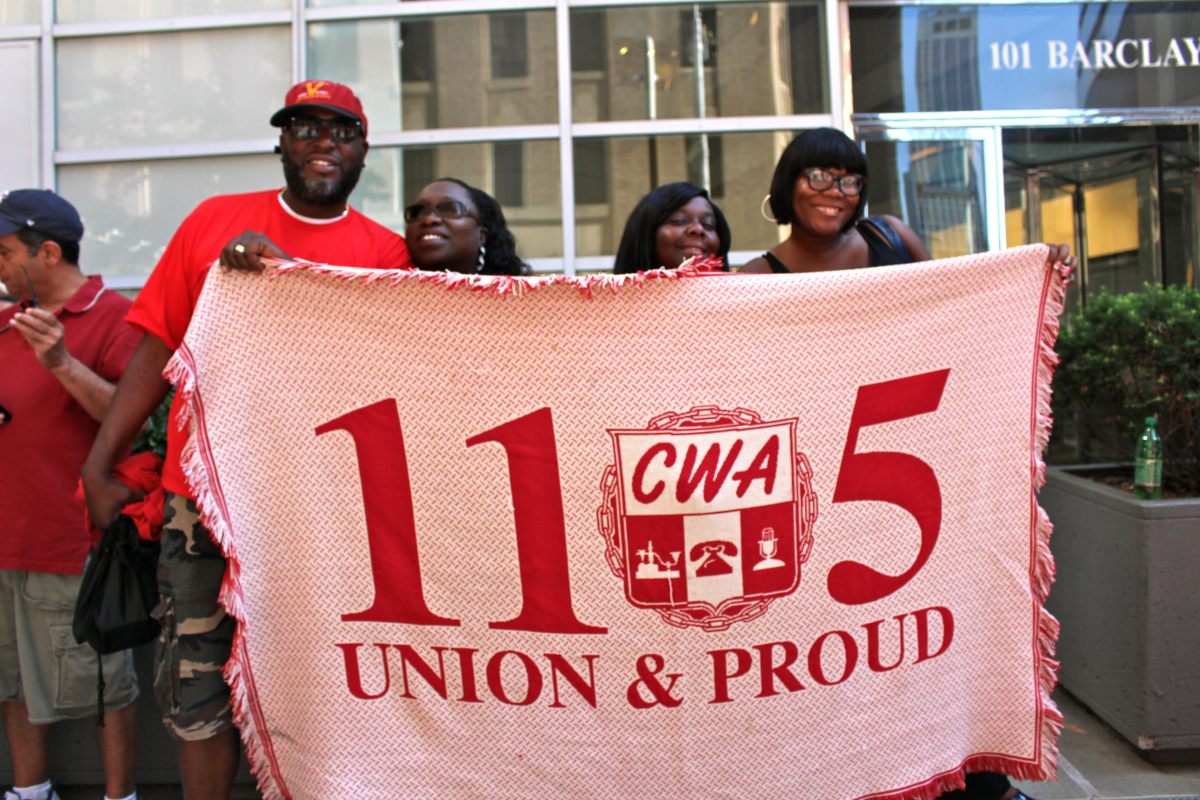 The contract covering 39,000 Verizon workers from Massachusetts to Virginia expired August 1. Leaders of the Communication Workers (CWA) and Electrical Workers (IBEW) have members’ authorization to call a strike, but so far they’ve held off.

In an August 2 town hall phone call, CWA members pressed union leaders on the decision not to strike.

“We didn’t go on strike now,” District 1 Vice President Dennis Trainor said, “because we believed the company wanted us to go on strike now… By not striking now they have to pay the scabs and pay their hotel bills while we work.”

Trainor said that CWA leaders “believe that working without a contract now is our best strategy. We will do the things we normally do while on strike, except this time we will be working, and we’ll be getting paid.”

The unions and Verizon management remain far apart on the issues. As CWA member Pamela Galpern explains in the August issue of Labor Notes:

The company raked in $9.6 billion in profits last year, and paid its top five executives $44 million. Yet it opened bargaining with a laundry list of giveback demands.

Four years ago, when their last contract expired, Verizon workers struck for two weeks, before returning and working without a contract for over a year.

They ultimately settled a new contract in September 2012. Trainor was not optimistic that this round of negotiations would be any faster.

Working without a Contract

Labor lawyer Robert Schwartz argues that working without a contract can be a powerful tool, allowing unions to strike without notice:

“Without a no-strike clause to hold it back, the union can credibly threaten to walk out without notice at the worst possible moment for the employer (except in the health care industry, where a 10-day strike notice is required). Informational picketing can be conducted to put the employer—and its customers—in a constant state of alarm about an imminent strike. The only way the employer can escape the uncertainty is to sign a contract."

Schwartz says it also allows short warning strikes. "The union can call a one- or two-day “warning” or “grievance” strike. While the union must avoid a series of strikes (“intermittent strike strategies” are not protected under the National Labor Relations Act), it can usually conduct at least two short-term walkouts without risking sanctions."

In addition, "the union will have greatly enhanced rights to bargain over day-to-day management decisions (read about workers who used this strategy at IKEA here). Contract expiration cancels any ‘management rights’ or ‘zipper’ provisions that allowed the employer to make unilateral changes.

“Instead, the employer must give notice to the union and bargain to impasse before making any changes to assignments, workloads, work rules, or other mandatory subjects of bargaining.

“If management tries to carry on as before, the union can file a stream of unfair labor practice (ULP) charges at the NLRB, forcing the employer to incur legal expenses and allowing the union to position future walkouts as ULP strikes.”

“We will strike if we have to,” he said on the town hall call, “but we will do it on our terms, not theirs. Right now we need to build an army of volunteers, using our retirees and our friends in labor to put pressure on Verizon.

“We will do everything by putting political and regulatory pressure on them. We need to put pressure on company executives and members of the board of directors.”

One of CWA’s strategies has been pressuring Verizon for its failure to expand its broadband FiOS service, despite promises to regulators and communities. The union brought the mayors of Kingston and Syracuse, New York, into negotiations last week to explain the impact of not having FiOS access on residents there.

The industry is changing fast, largely because of deregulation. The 1996 Telecommunications Act changed or eliminated many of the rules that used to rein in corporate behavior.

Because it can, CWA says, Verizon is abandoning its copper lines and letting service quality slide. FiOS may be the future, but thousands of customers are still on copper lines.

Under past regulations, Verizon was heavily fined if customers were left out of service for more than 24 hours…. But in 2005 the state’s Public Service Commission eliminated the mandatory fines. And in 2010 Verizon got the PSC to agree that “core” customers (elderly, lifeline, and other “special cases”) were the only ones it had to ensure weren’t out of service more than 24 hours.

While landline is still somewhat regulated, wireless is entirely unregulated.

The company has also fought hard to keep Verizon Wireless non-union. A hundred technicians in New York City were the only ones unionized until last year’s breakthrough, when 70 workers at six Brooklyn wireless retail stores joined CWA. Retail workers at an Everett, Massachusetts, store followed suit.

CWA is bargaining the wireless technicians’ and retail workers’ contracts alongside the larger landline contract.

“The company wants to move call center work to vendors, either in the U.S. or in other countries like India and Mexico. They want to be able to do whatever they want with the calls, and we’re fighting to keep all our work here,” said Don Trementozzi, CWA Local 1400 president.

“We cannot allow them to do what they are doing—and neither can the public,” said newly elected CWA President Chris Shelton on the town hall call. “Because if they get away with it with us, they’ll get away with it with everybody else, and there will be no more middle class in this country.”