Organizing Is the Key to Surviving Friedrichs 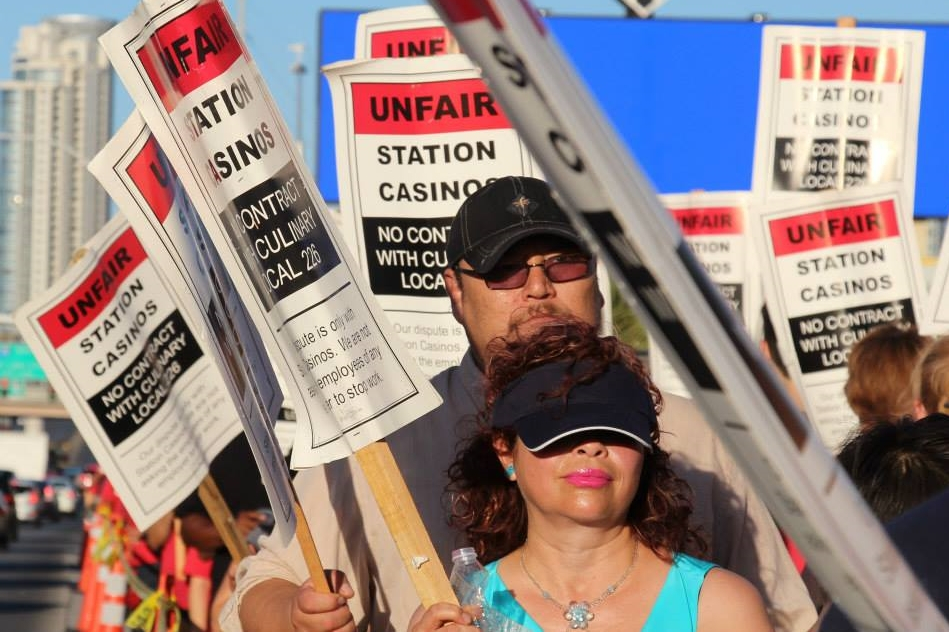 A decision that makes the whole public sector “right to work” could be devastating. But it won’t make unions powerless. Photo: Culinary Workers Union Local 226.

When news broke that the Supreme Court would hear Friedrichs v. California Teachers Association, headlines instantly projected the worst, calling it “The Supreme Court Case That Could Decimate American Public Sector Unionism,” “An Existential Threat,” and even “The End of Public-Employee Unions?”

Hyperbole aside, a decision that makes the whole public sector “right to work” could be devastating. But it won’t make unions powerless.

After all, public sector workers didn’t always have legal protection to unionize, bargain, or strike, much less enforce agency shop. Not too far back in history, they won those rights—by organizing without them.

So how did teacher unions, for instance, grow? New York City teachers struck for collective bargaining rights in 1960—touching off a decade of 300 teacher strikes, as the ranks of the American Federation of Teachers swelled from 60,000 to 200,000.

Strikes led to more formal organizing. From 1970 on, 100,000 joined the National Education Association each year. By 1980 it had 2 million members.

In many states, it took strikes and demonstrations to press lawmakers to recognize public workers’ right to organize. And many of these strikes were illegal.

The first legal statewide strike by public workers wasn’t till 1975, by 40,000 AFSCME members in Pennsylvania.

Last month I wrote about how unions are preparing to lose the right to require non-members to pay fair-share fees. United Teachers Los Angeles Vice President Daniel Barnhart pointed out that his union has only had these fees since 1992.

Of course, none of this makes right to work a union-building policy, as some argue. Let’s not kid ourselves that the disappearance of agency shops will somehow spark a renaissance of worker self-organizing, or automatically draw unions closer to their members.

We’ve seen the results in Wisconsin, after just a few years of a law that severely restricts union rights. It’s not pretty. Member rolls shrank 30 percent in education locals, and even more in AFSCME. (It didn’t help that many unions poured resources into recalling Governor Scott Walker rather than internal organizing, then pulled out when they lost.)

There’s a reason why bosses push these laws: they weaken unions. It hurts solidarity when members have to work alongside “free riders.” Union budgets will probably shrink. And activists and staff will have to dedicate more time to simply maintaining numbers.

For instance, Las Vegas’s Culinary Union, in right-to-work Nevada, has 90 percent of its 55,000 casino workers paying dues. It also has high density and prioritizes new organizing.

How does Culinary do it? The union involves members in strong contract campaigns. It’s won good wages and benefits for what were once (and are still, in non-union casinos) low-wage jobs.

Teacher unions in Milwaukee, Madison, and Racine, Wisconsin, too, have kept membership above 70 percent—and that’s with a law that virtually prevents them from bargaining, and requires them to recertify annually.

Members there have voted to rejoin multiple times, because the unions fight for what they care about: defending public education.

Too many unions mistakenly see two competing priorities: we won’t have time to engage workers in inspiring fights, because we’ll be too busy trying to sign them up as union members!

But that’s a losing strategy. When internal organizing is done right, the two tasks are one and the same.

Samantha Winslow is co-director of Labor Notes.samantha@labornotes.org
Related
Viewpoints: How Academic Workers’ Leverage Can Grow in a Long-Haul Strike »
Every Union Contract Right Now Should Be the Best Ever »
Could We See a Rail Strike? »
‘No Contract, No Matisse’: Philadelphia Museum of Art Workers Win First Contract After Strike »
Undaunted by Fines, Massachusetts Teachers Defy Strike Ban »