'This American Life' on Auto Workers: A Hack Job 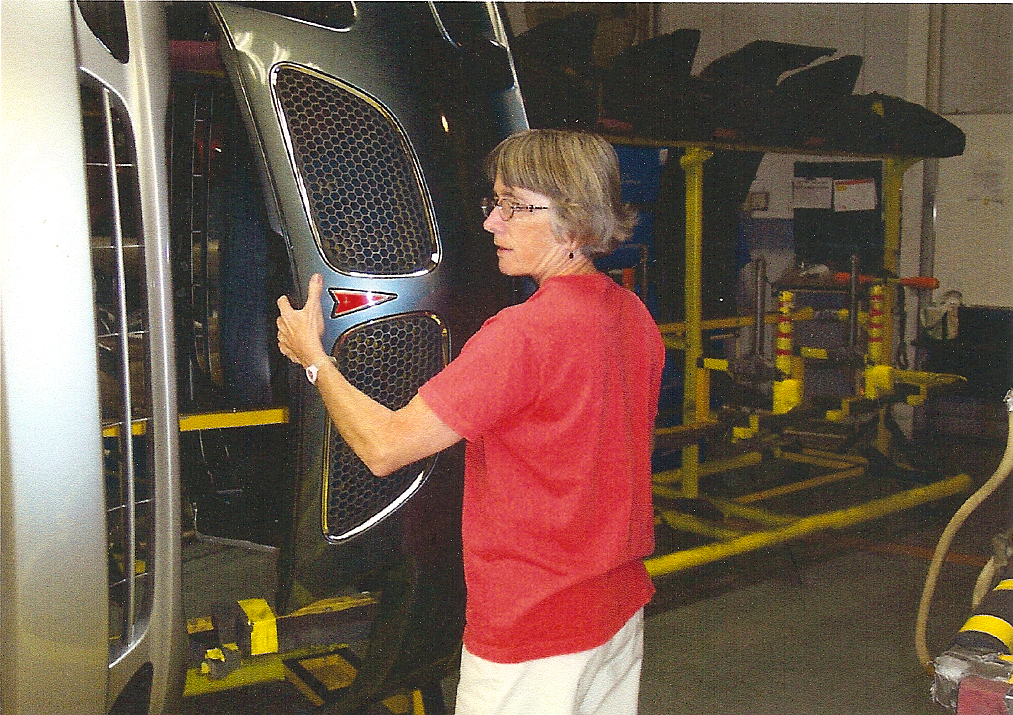 The NUMMI auto plant's gift to U.S. manufacturing was the Toyota Production System, or “lean production,” which taught managers how to slice up jobs to make them more repetitive and require less skill—thus increasing stress on workers and discarding them when their bodies and minds could no longer take it.

Caroline Lund worked in the belly of the beast at NUMMI. There she edited the outstanding shop floor newsletter The Barking Dog, which has been collected in a recent book. Photo courtesy of Barry Sheppard.

This week “This American Life” once again sings the praises of the NUMMI plant in Fremont, California, celebrated for bringing Toyota’s methods to U.S. manufacturing. To hear the show tell it, if only General Motors and the rest of the U.S. auto industry had adopted this approach sooner, it could have averted the crisis of the 2000s.

But the truth is that the U.S. auto industry did adopt Toyota’s lean system. The NUMMI plant became the most famous factory in America and the site of manager-pilgrims from every walk of life, seeking the secrets of productivity. Labor-management cooperation and the “team concept” were the hottest things going.

“You could not open a union newspaper—or often a mainstream newspaper—in that decade [the ’80s] without reading how lovely it was that unions and executives were finally laying down the hatchet,” longtime Labor Notes editor Jane Slaughter recalled.

Trouble is, the “team concept” program of standardization, deskilling, and continuous speedup wasn’t such a boon for workers as the show portrays—neither the imported version, nor even the original in Japan. Mike Parker wrote books and articles on the Toyota Production System—dubbed “management-by-stress”—as it was coming to dominance in the ’80s and ’90s.

“Supposedly what Japanese workers got for submitting themselves to this grueling system was guaranteed lifetime employment—company loyalty returned to its workers,” Parker reported. “Much of this promise was always fictional. Workers who are injured or worn out are forced out. ‘Sudden death from overwork’ is common enough to earn its own term, karōshi. Toyota workers in Japan who make it to senior years are forced to work for a contractor at lower wages.”

“In truth, employers used ‘cooperation’ to study how the work got done. They were super-aware how much their profits depended on getting us to work harder,” Slaughter wrote. “Labor Notes put on a dozen ‘team concept schools,’ where we helped people see through the hogwash and come up with ways to throw sand in the gears of cooperation schemes.”

The episode is a rerun; it originally aired in 2010, as the plant was about to close. Parker wrote this takedown at the time. (Soon afterwards, a reader in Virginia printed up copies of Parker's article and organized a grassroots picket when "This American Life" host Ira Glass came to town on the lecture circuit.) Parker and Slaughter also coauthored the book Working Smart: A Union Guide to Participation Programs and Reengineering, which dissects NUMMI in detail. —Eds.

Toyota and the Myth of Quality
March 23, 2010 / Mike Parker
“They would like you to think that quality is about producing a better, safer car for you. But that is not how ‘quality’ is defined in the Toyota Production System.”

Volkswagen in Tennessee: Productivity’s Price
March 12, 2015 / Chris Brooks
In its bid to become the world's largest auto manufacturer, VW is trying to out-Toyota Toyota. Its Chattanooga plant provides a window into the state of the art of brutal, productivity-maximizing "lean management."

Auto Companies Recover, But Jobs Are Harder
August 23, 2011 / Jane Slaughter
An Ohio GM worker describes the pressure to do more work in less time under tighter constraints: “The space to perform her tasks is marked off with lines on the floor—no more working ‘up the line.’ She’s electronically monitored: If the electric torque gun she uses to shoot screws doesn’t detect the correct number of rotations within the footprint of the job, an alert goes off, warning the team leader. If the problem isn’t addressed quickly enough, the production line shuts down, with the electronic finger pointed at her.”

In Showcase of Labor-Management Teamwork, Workers Choose the Old Way
February 01, 2000 / Tom Hopp
Workers at a GM Saturn plant in Spring Hill, Tennessee, who’d had enough of the “team concept,” threw out their management-cozy union leaders in 1999 in favor of a “get tough” slate. Soon they'd won back seniority and fixed shifts.

Review: In Shop Floor Newsletter, Voice of the Barking Underdog.
October 28, 2014 / Gregg Shotwell
Caroline Lund worked in the belly of the beast at the NUMMI auto plant, celebrated for bringing Toyota’s methods to U.S. manufacturing. There she edited the outstanding shop floor newsletter The Barking Dog, collected in a recent book.

Working Smart: A Union Guide to Participation Programs and Reengineering
This 315-page manual by Mike Parker and Jane Slaughter takes union members through the ins and outs of participation programs, focusing on strategies. Case studies by activists, supplemented by the authors' own years of experience, guide unions to a range of tactics. The book dissects NUMMI in detail.

Can Worker-Owners Make a Big Factory Run?
April 03, 2013 / Jane Slaughter
What would it mean for workers to really control production as a team? Slaughter profiled a tire factory in Mexico that’s run by 1,050 members of a worker cooperative—with no bosses. They’ve increased productivity and quality, too.

What a disappointment was last week’s This American Life. This episode of the popular one-hour show on public radio was a snapshot of how the auto industry could have been saved—if only executives had learned from the innovations pioneered at the NUMMI plant in California, a joint Toyota-GM experiment created in 1985.

I have been a big fan of This American Life. The two-part series they did on health care, “More Is Less” and “Someone Else's Money,” was outstanding.

But what they put out on NUMMI was a hack job: the same tired story about how the Fremont, California, plant was a disaster when it belonged to GM, but Toyota turned it around—using the same workforce to produce a quality car based on teamwork and respect for its workers.

Most of this is myth, hiding the reality: NUMMI’s gift to U.S. manufacturing was the Toyota Production System, or “lean production,” which taught managers how to slice up jobs to make them more repetitive and require less skill, thus increasing stress on workers and discarding them when their bodies and minds could no longer take it. In the NUMMI case, the whole workforce will be discarded: the plant is closing tomorrow.

Why does This American Life simply accept the Toyota president's testimony, that the reason for the company’s massive recalls recently was that Toyota had deviated from its true course and tried to grow too quickly? Something is more fundamentally wrong. (Hint: it involves the company’s lean management system that maintains constant pressure on employees and assures tighter control of a top-down decision-making operation, producing a culture that destroys whistleblowers and breeds cover-ups. More on that here.)

Plus, if worker-management relations were so great at NUMMI and its high-quality product was selling so well, why is Toyota closing the plant? Toyota claims that the closing resulted from the loss of GM's share of production, when the nose-diving auto maker pulled out last year. But the California Treasurer’s Commission’s report on the plant closing debunks that notion, revealing that GM accounted for only 10 percent of production last year and 15 percent since 2001.

The show could have talked about what happens to a community when a plant closes, and about how Toyota is using the fact that NUMMI was a joint venture to disclaim responsibility for environmental clean-up or for transferring loyal workers to other Toyota plants.

But the worst part of the episode is the producers’ decision to dump on thousands of workers, blaming them for being “stuck in old ways” and pinning responsibility on them (and also on management) for the industry’s troubles.

The show could have looked at other unionized auto plants that used a version of the Toyota Production System (Mazda in Michigan, CAMI in Ontario, Diamond-Star in Illinois). These were all cases where workers were able to experience the system for themselves and had the chance—because they were union—to do something about it.

Part of the episode describes how a plant manager tried to bring Toyota’s methods to GM’s Southgate factory in Southern California, as the last chance to save the plant. But managers resisted and workers elected a “militant” union leadership, rejecting the very system that, we hear, could have saved the plant. This American Life makes the point that the difference between Southgate and NUMMI was that the Southgate workers had not been out of a job for more than two years, so they were not afraid enough to accept change!

At all these plants, including NUMMI, workers voted out union leaders who championed the lean system and voted in people willing to challenge it. The show’s insulting dismissal of this record—suggesting that these workers wanted plants filled with corruption, drugs, and lousy cars—hardly comes up to This American Life’s standards. The producers could have done a service for people who are trying to understand the auto industry’s crisis by looking into these questions—and talking to a generation of workers who confronted it day by day—instead of doing Toyota’s PR.