Viewpoint: Division in the Ranks 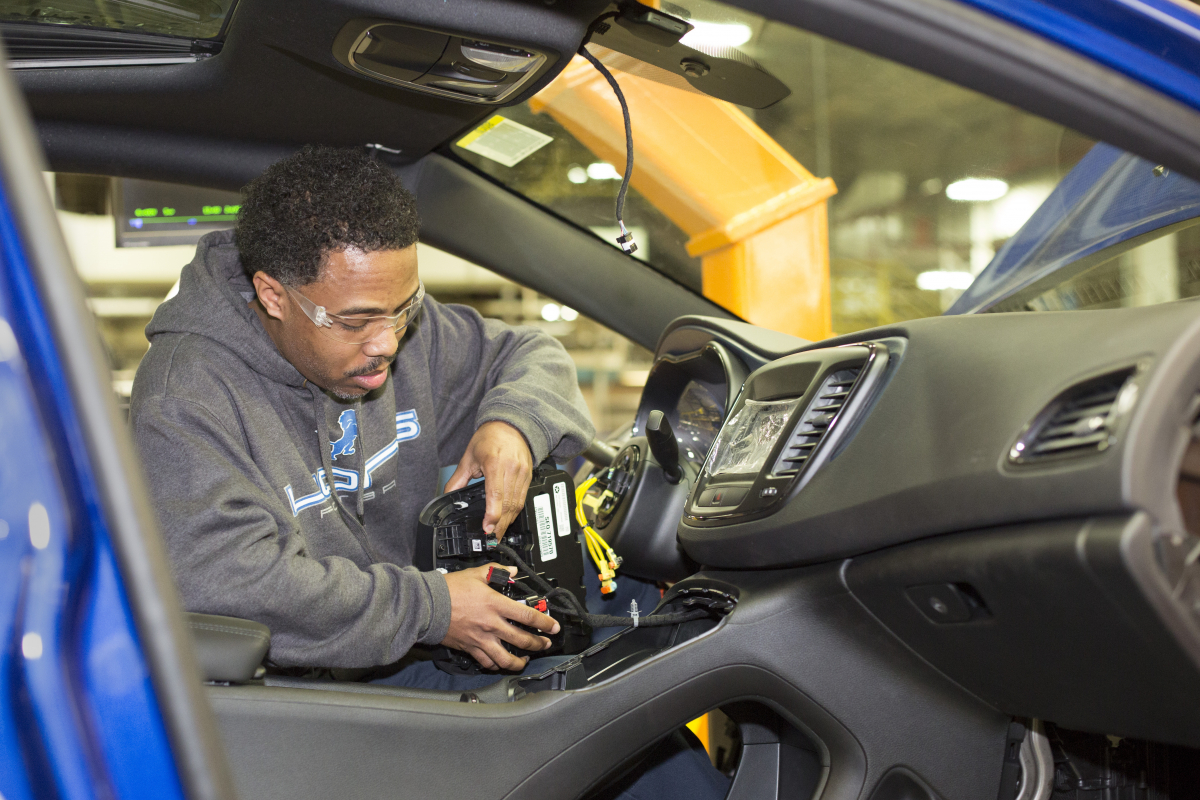 Workers at a Chrysler parts center near Detroit have started a petition to bring outsourced janitorial jobs back in-house. This photo shows a worker at a Chrysler assembly plant. Photo: Jim West/jimwestphoto.com.

If there was a boulder in your driveway, blocking your garage, what would you do? You’d get a sledgehammer and start chipping away at it, removing smaller pieces one by one.

That’s what Chrysler, General Motors, and Ford are doing: chipping away at our union.

For three years I’ve been working as a janitor-housekeeper at a parts distribution plant in Center Line, Michigan. It’s the national headquarters for Mopar, a Chrysler subsidiary.

I’m a union member. But I work for a contractor, Caravan Facilities Management.

Of the several hundred people who work in the plant complex, 30 of us work full-time for Caravan, taking care of recycling, hazardous materials, and shipping and receiving. Until 2006, these jobs were held by Chrysler employees with seniority.

One day I got to talking with one of the Chrysler employees who used to do our jobs. “You’ve heard about two-tier,” he said. “What do you think about the three-tier situation?”

“You all,” he said. “You’re union members, but you’re the stepchild, so to speak.”

Life on the Fifth Tier inside Ford’s Rouge Complex, by Brad Duncan

A Rank-and-File Appeal: ‘No More Tiers’, by Sean Crawford

That’s when I started asking more questions about our union contract. For Caravan workers, the contract consists of 44 pages of gray, misinterpreted mumbo-jumbo—compared to the three full books of our Chrysler counterparts.

Our contract doesn’t cover much—and what it does cover, the company finds loopholes around. For instance, whenever members are assigned to work extra hours, a union committeeperson is supposed to be there to represent them. It’s just like having a safety official around in case of emergency. But the company isn’t doing that.

When I ask our union officials about these problems, they tell me they can’t even get members to come to the union meetings. I say, “Well, this is why. Everything’s being swept under the rug.”

Don’t get me wrong: I don’t take for granted the sacrifices that have been made for everything the union has won. I don’t want to take away from what Chrysler employees have.

But ask yourself, why would they start outsourcing jobs to different contractors? Worldwide, Caravan employs thousands of workers at Chrysler and General Motors facilities.

By dividing us into different tiers and outsourced groups, the auto companies are gradually creating a sense of hopelessness among United Auto Workers members. Our main focus should be on eliminating the divisions.

Outsourcing to Caravan isn’t the only way they’re dividing us. From Chrysler employees I hear that apprenticeships are being handled differently than in the past. There’s no longer opportunity to rise within the ranks.

Recently I watched workers go through training with the company and pass a series of tests to be eligible for millwright upgrade jobs. This was supposed to mean that when a special project called for millwrights, they could do the job and get paid skilled-trade wages for that shift.

But when a job requiring millwrights did come up, these employees were told their training was irrelevant. A contractor was brought in to do the job instead.

So I’ve gotten together with some co-workers, both Chrysler and Caravan employees, and started a petition to draw attention to these problems. We’re asking UAW leaders to do away with the dividing factors—be it two-tier or letting contracting companies come in and undermine the union. You can sign the petition here.

So far we’ve got 250 signatures, mostly from Center Line. This spring we plan to really start campaigning. The first step is getting the word out. We’ll make T-shirts and visit other Detroit-area plants to gather more signatures.

The union had a bargaining convention last week, and I hear they’re discussing getting Chrysler to make us employees. But I’ve been hearing that since I started working here.

Robert Moor is a member of United Auto Workers Local 1248. Please feel free to contact him with any suggestions or support at rmoor79[at]gmail[dot]com.

Note: The article text has been slightly updated to clarify that Mopar distributes parts (rather than manufacturing them).

Related
Auto Workers Win Direct Democracy in Referendum »
This Year I’m Thankful for the Revolt Against Two-Tier »
'We'll Never Be in This Position Again': Striking Deere Workers Hold Out for Better Deal »
Academic Workers Join Push for One Member, One Vote in the UAW »
'Let's Put a Wrench in Things Now': Deere Workers Strike as Company Rakes in Record Profits »