Kellogg’s Employees Back to Work 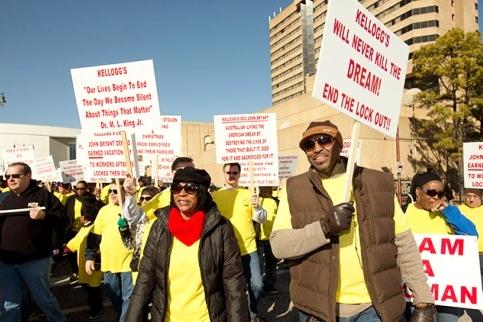 The strategy of relying on a judge to get members back to work worked—but only after they faced 10 months without pay on a picket line. Had the union known what to expect, says President Kevin Bradshaw, “we would not have been so nice.” Photo: BCTGM.

Memphis residents who drive down Airport Boulevard have become accustomed to passing a small picket line of six to 10 workers. A prominent sign atop the factory behind them reads “Kellogg’s Cereal.”

It was a surprise move in negotiations last October when Kellogg’s locked out the plant’s 220 workers. For the next 295 days, they picketed just to get back to work. Workers spent their holidays this way. They endured the Memphis summer heat.

They also watched daily as scabs entered the plant through a back entrance, and trains dropped off supplies and picked up finished cereal north of the picket line.

But on August 12, without any apparent hitches, workers finally reentered the factory.

The lockout is part of a long-term effort by Kellogg’s to produce its cereal with cheaper labor. The company has spent a decade systematically shifting work from union factories in the U.S., Canada, and Australia to non-union plants in Mexico and Southeast Asia.

It has also ramped up automation in its factories, significantly decreasing the number of jobs. In 1996, there were over 800 employees at the Memphis plant. Following increases in automation and shifting 58 million pounds of production to Mexico, the plant has only 220 workers.

Bakery Workers (BCTGM) Local 252G’s strategy from the beginning hinged on its argument that the lockout was illegal. In negotiations, Kellogg demanded the right to hire more part-time and casual employees at lower pay rates. BCTGM maintained that these issues should properly be addressed in negotiations over a master agreement that covers multiple plants, not in local negotiations.

A federal judge sided with the union in early August and ordered an end to the lockout.

Other legal proceedings continue. In a separate ruling, an administrative judge ruled that the lockout was OK. He did not pronounce judgment on the substance of the case the union had filed to win back pay and damages. That case will proceed to the National Labor Relations Board.

Throughout the lockout, Local 252G looked to community allies for solidarity, presenting its struggle as part of Memphis’s storied civil rights movement.

Union officials speculated that Kellogg’s picked Memphis because it thought the Southern plant would be easy pick on.

The union partnered with civil rights organizations, marched in the Martin Luther King, Jr. Day parade, and accused Kellogg’s of discriminating against its majority-Black workforce in Memphis by locking the workers out.

If successful, the attack could become a model. “Other companies are going to see it. General Mills has already called our international president and said, ‘What are you doing about Kellogg?’ He’s thinking if Kellogg can do it, they can, too,” Local 252G President Kevin Bradshaw told me in January.

‘We Would Not Have Been So Nice’

The publicity the union garnered, however, did not appear to create the pressure it had hoped for. Kellogg’s weathered BCTGM’s withering criticism and sporadic rallies while maintaining production unabated.

The strategy of relying on a judge to get members back to work worked—but only after they faced 10 months without pay on a picket line.

Asked what the union might have done differently had its leaders known they faced such a long lockout, Bradshaw said, “We would have been better prepared with funds. It’s an eye-opener to be prepared next time.”

Also, he said, “we would not have been so nice.”

Negotiations will resume in the Memphis plant. Meanwhile, workers at the Kellogg’s plant in Omaha, Nebraska, began their own negotiations in May. And the plant in Lancaster, Pennsylvania, will begin in September.

Bradshaw believes this strengthens the union position. “Now the ball is in our court,” he says. “They put themselves in a position with three plants without a contract.

National negotiations over the master contract will begin in October 2015. “The company may very well come back and ask for the same things they asked for in the local contract,” Bradshaw said.

Steve Payne was an organizer with the Service Employees in Minneapolis for eight years. He is now a graduate student at the University of Memphis.