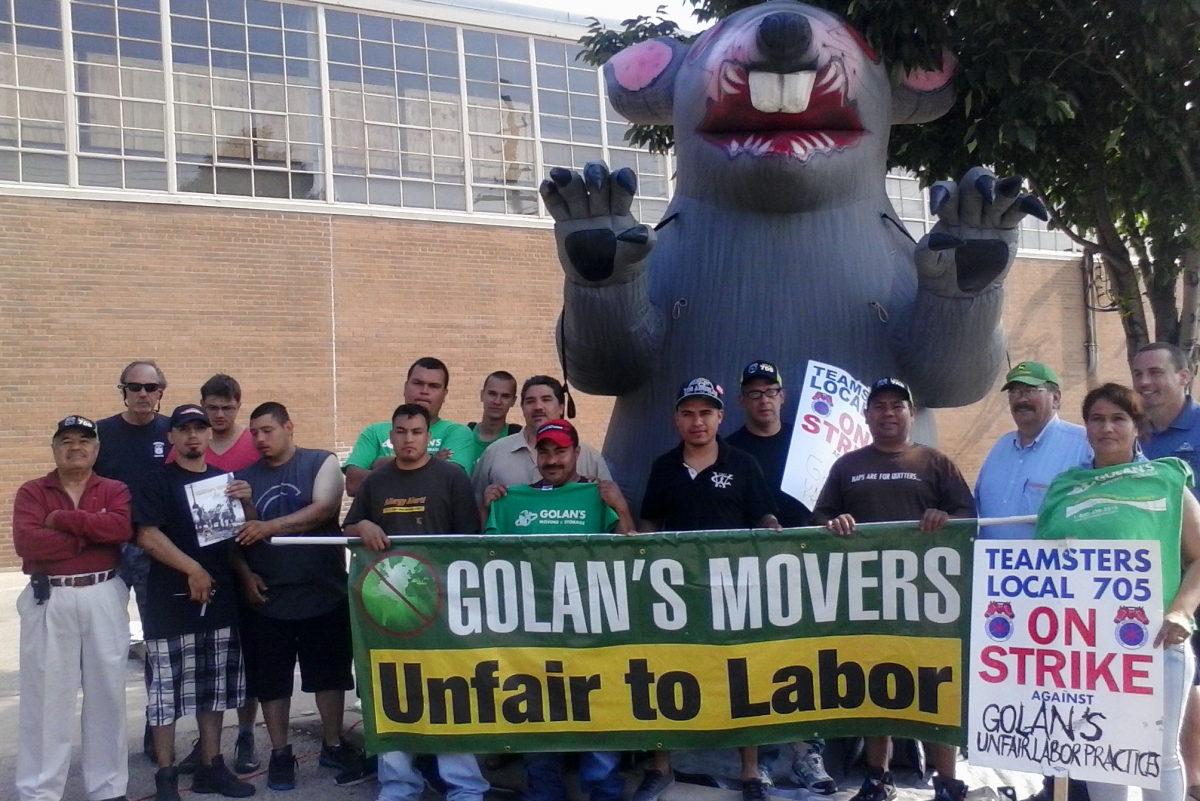 Moving company managers thought they could use foreign students on cultural exchange visas to undermine a strike. Their plan backfired when the students walked out too. Photo: Anne Krantz.

Managers at Golan’s Moving & Storage in Skokie, Illinois, thought they had a surefire strategy to beat the Teamsters in negotiations for a first contract. In addition to switching lawyers and stalling to try to wait the movers out, they brought in low-paid summer help, students from Romania, Mongolia, Lithuania, Bulgaria, and Azerbaijan.

But when Golan’s workers, mostly Latino immigrants, decided to strike July 27, most of the students went with them. They too were fed up with conditions at Golan’s.

They 82 strikers have been out a week so far. Asked why they walked, Martín Cortes, who’s been a residential mover at Golan’s for 14 years, said, “El pago y el trato”—the pay and the treatment.

Workers would show up at 6:30 a.m. to prepare their trucks, but pay didn’t start till they reached the customer’s house an hour or more later. They had to buy their own uniforms. Any damage to furniture was deducted from workers’ checks, with no notice or discussion. Cortes makes $13.50 an hour as a foreman now, up from $12 before the union was certified last December. Before that, he said, pay had not risen for years.

Golan’s workers initially contacted a worker center, Arise Chicago, for help. As it’s done for other workers, Arise put them in touch with a union, in this case the Teamsters, which helped them organize and win union certification. Bargaining began in February, but there’s no deal in sight.

For the strike, the Teamsters brought out their giant rat and trained the workers to do roving pickets. When the 16 or so scabs take a truck out, strikers follow them and picket when they reach their jobsite.

Take a second to imagine yourself as a customer who’s hired Golan’s to come into your house, pick up your possessions, and load them onto a truck. And think about knowing there’s a labor dispute in progress, made highly real to you by the presence of their co-workers picketing while the scabs work. Careful with Aunt Minnie’s vase!

And the students? Silviu Radu paid more than $1,100 and bought a plane ticket from Romania to join a program that placed him at Golan’s for 90 days for the peak moving season, under a J-1 “cultural exchange” visa. He was told he’d be making $250-$300 a week, enough to save money and do some traveling after the job was over.

But he found the students were only allowed to work one day on, one day off—not enough to get by, much less save, though right before the strike some students were given more work than the regular workers. His pay was $10.50 an hour. He—and most of the international students—joined the walkout.

They aren’t the first international student-workers to go on strike. In 2012 J-1 workers who packed candy for Hershey in Pennsylvania won $213,000 in back pay after they struck over abusive conditions, and employers were fined $143,000 for safety and health violations. And J-1 McDonald’s workers walked out in 2013.

Jane Slaughter is a former editor of Labor Notes and co-author of Secrets of a Successful Organizer.
Related
GEICO Workers Launch Union Effort, Management Says Call the Cops »
Before Your Strike Vote, Consider a Practice Strike Vote »
Employers' Productivity Standards Are Not Real Science. Here's How to Push Back »
Frontier Strikes Get First Aid Kits Updated, Win Back Work »
Florida Letter Carriers Won Back Our Sunday Breaks with Direct Action »