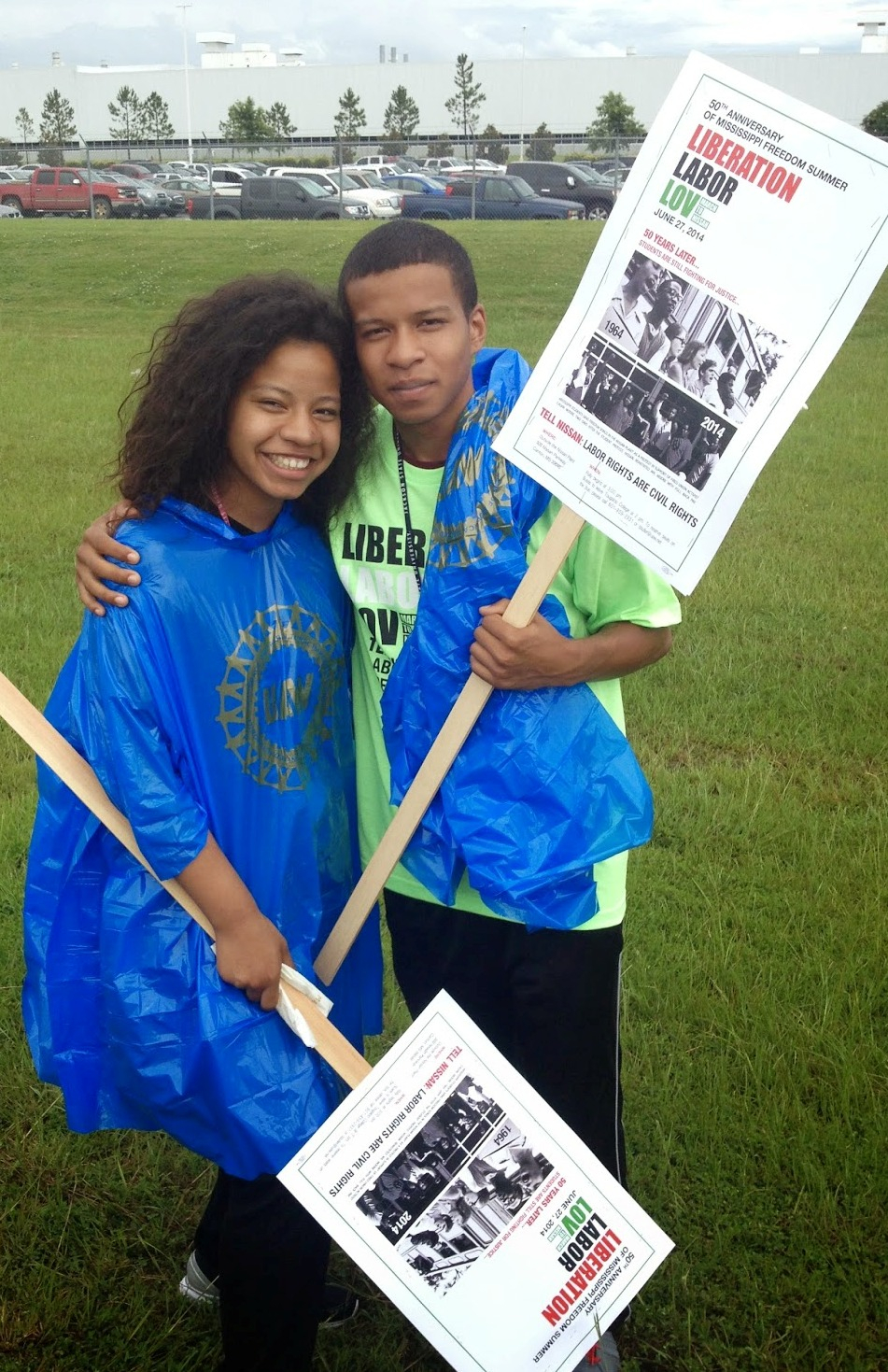 It was no surprise they knew the tune. Some were alumni of Freedom Summer. Others were a new generation of student activists. Together they marked the anniversary with a conference and a June 27 rally at the Nissan assembly plant in Canton, Mississippi.

Workers at the plant went public two years ago with their drive to join the United Auto Workers.

It’s part of the union’s push to organize three foreign-owned auto plants in the “right-to-work” South. The other two are a Mercedes-Benz plant in Tuscaloosa County, Alabama, and a Volkswagen plant in Chattanooga, Tennessee.

The Nissan plant is the largest of the three. With the addition of 500 new jobs, the workforce, overwhelmingly African American, is set to hit 6,000 in the fall.

Something like a quarter of those jobs, though—and all the new ones—aren’t even in the prospective union bargaining unit, since their employer is a temp agency. Kelly Services’s online job listings trumpet the opportunity to work rotating shifts on an assembly line, where you’ll stand all day and “perform repetitive tasks over long periods of time”—for $12-$12.75 an hour.

It’s the 50th anniversary of Mississippi Freedom Summer: the 1964 campaign, led by the Student Nonviolent Coordinating Committee, to register large numbers of African Americans to vote.

To mark the anniversary, civil rights veterans joined students and workers to march on the Nissan plant, calling for a fair union election and declaring, “Labor rights are civil rights.”

During the summer of 1964, not only hundreds of Black and white college students and other out-of-state volunteers but also thousands of Mississippians bravely joined the effort. Many endured arrests, beatings, bombings. Some were murdered. But in the process they embarrassed the U.S. on the world stage and moved the country to end Jim Crow.

While that summer’s campaign focused on political rights, the organizing holds plenty of lessons for unionists. Some carried those lessons into the labor movement themselves.

Even today, auto workers in Canton, Mississippi, know their insecure jobs are a legacy of Jim Crow.

To learn more, check out the PBS documentary “Freedom Summer,” which you can watch for free here, or read Charles Payne’s excellent book, I’ve Got the Light of Freedom: The Organizing Tradition and the Mississippi Freedom Struggle.

“We are not generation temp,” read one young marcher’s hand-lettered sign.

The union is calling publicly for Nissan to agree to a set of fair principles for an election, but there’s no sign the company is interested in doing so. When actor Danny Glover led the Freedom Summer marchers to the plant and attempted to deliver a petition, management hid.

The most high-profile of the three drives, the one in Chattanooga, drew national attention around its February election. VW management had agreed to stay neutral, and even seemed to support the union effort, in combination with a plan to import the “works council,” a German system of labor-management collaboration.

But the union lost the election narrowly. Depending who you ask, chalk this up to right-wing politicians’ threats, “vote no” publicity from national anti-union groups, intimidation by low-level supervisors, or workers’ skepticism about the works council scheme and UAW’s concessions elsewhere.

Then in July the UAW announced it would begin signing up members anyway, to a new, non-bargaining Local 42 (Black baseball pioneer Jackie Robinson’s number). It appears VW has agreed to recognize the union and negotiate a contract after membership reaches a majority.

UAW may hope to adopt the same approach at the other two plants, but there it faces an additional obstacle: hostile management. More than two years in, the union hasn’t been able to reach the supermajority support it takes to endure a boss fight and win an authorization election in either Canton or Tuscaloosa.

In both plants, workers report anti-union intimidation. In March Nissan fired 11-year employee Calvin Moore, an outspoken supporter who regularly wore union T-shirts to work, for “insubordination.” But after a month of protests, including demonstrations by Brazilian Nissan workers, Moore was reinstated with full back pay.

Alexandra Bradbury is the editor of Labor Notes.al@labornotes.org
Related
Auto Workers Turn a Corner for Strike Pay and Democracy »
UAW Delegates Head to Convention and Prepare for First Direct Elections »
A Life in Transit: ‘What You Can Get Is Set by How Far You Are Prepared to Go’ »
When Workers Swapped Segregation for Solidarity »
In a Landslide Victory, Mexican GM Workers Vote In an Independent Union »