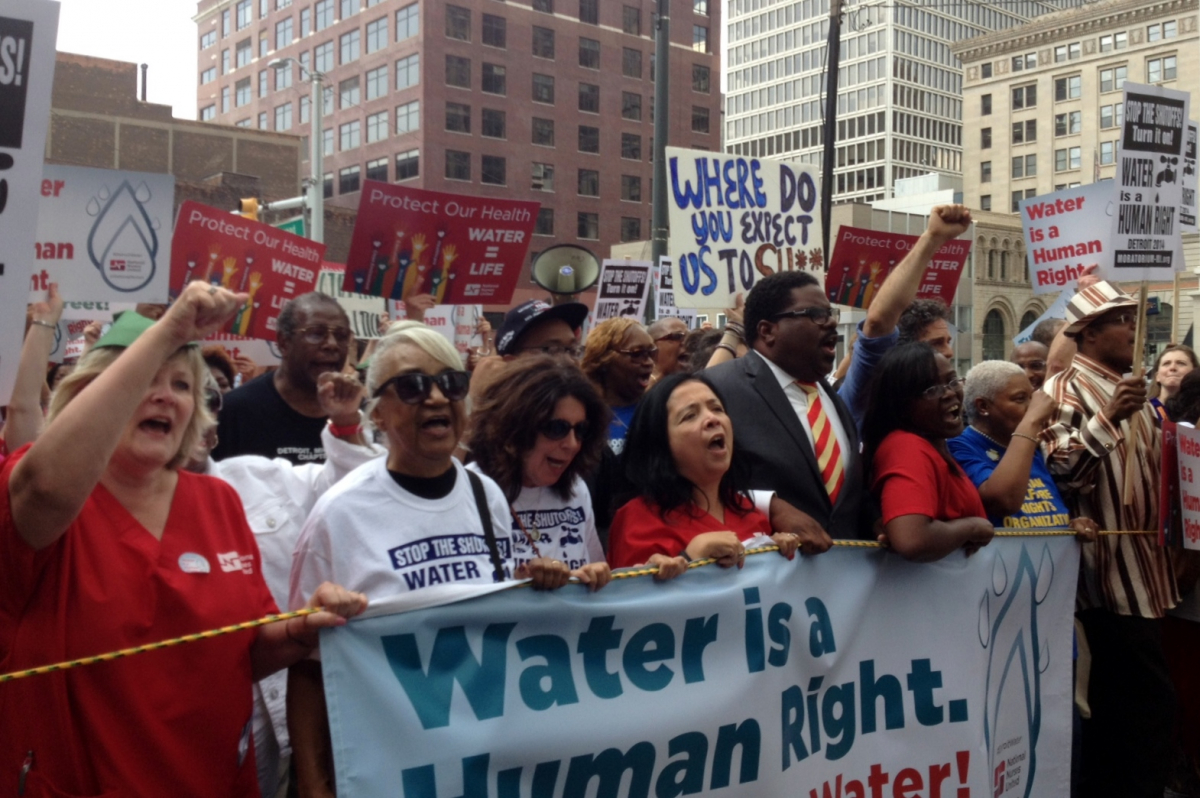 A thousand Detroiters and supporters marched through downtown to say “Turn On the Water!” The city has been sending shut-off trucks to the houses of those behind on their water bills, turning off the taps at 3,000 houses a week. Photo: Claudette Begin.

UPDATE, July 21: Days after the march, Detroit's Water Department has announced it will suspend the shut-offs for 15 days to give residents another chance to prove they can't pay.

A thousand Detroiters and supporters marched through downtown today to say “Turn On the Water!” Since March the city has been sending shut-off trucks to the houses of those behind on their water bills, turning off the taps at about 3,000 houses a week.

A big promoter of the march was the National Nurses Union, which sent a bus from Chicago and nurses from its Michigan arm. NNU handed out a proclamation, in script reminiscent of the Declaration of Independence, declaring Detroit a “Public Health Emergency Zone” and demanding a moratorium on the shut-offs. The march was swelled by the presence of attendees from the national conference of Netroots Nation, a group of progressive bloggers.

Jean Ross, NNU national co-president, told Labor Notes, “It’s an extra irony that this is happening in the wealthiest country on the planet—and that it’s a manufactured crisis.”

Wearing a peaked green cap to connote NNU’s campaign for a “Robin Hood tax,” Ross said Detroit was in “dire straits because of what Wall Street has done to our economy.” The measure NNU is pushing would put a small tax on banks’ financial transactions, generating funds for jobs, schools, housing, hospitals, and a social safety net.

The Detroit Water Department says that 120,000 accounts in the battered city of 700,000 are delinquent, that is, 60 days behind or owing more than $150. A typical monthly bill for a small family is in the $50 range. After a shutoff, the resident must pay a $30 reconnection fee—and the fine for “stealing water” by reconnecting oneself is $250 for the first offense, then $500, then $660. The Water Department takes a hard line on such “thieves,” saying water won't be restored unless they pay in full.

About 60 percent of those shut off are able to pay up and get their water turned on within a day. By the beginning of this month, 4,500 households were without water.

On Wednesday the anti-foreclosure group Detroit Eviction Defense canvassed residents of the city's Southwest Side. Two women with children told canvassers they paid their landlord for water each month but that they were under threat of shutoff. Caring for children in a house without water is grounds for the department of social services to remove the children.

At the demonstration, one picketer carried a sign noting that it was considered abuse to deny water to a pet.

The wave of shutoffs came as a surprise to Detroiters. Some speculate that the sudden attempt to collect and shut off is part of the Emergency Manager’s plan to privatize the Detroit Water Department, which serves the suburbs, too. The fact that Detroit owns the department has been a thorn in the side of suburban officials for decades.

“This dangerous public health crisis is further proof that we don’t have a bankrupt city—we have a bankrupt system," said John Armelagos, president of the Michigan Nurses Association.

This afternoon a Canadian Water Convoy was bringing water across the border to support Detroiters. A People’s Water Station will be set up at St. Peter's Episcopal Church, whose pastor was arrested last week for blocking a shut-off truck.

Both Governor Rick Snyder and his appointee Emergency Manager Kevyn Orr were pilloried by demonstrators this afternoon. The marchers also stopped to holler at Chase Bank, a leader in the foreclosures that have removed tens of thousands of Detroiters from their homes. Of the bank, a local anti-eviction activist commented, “This is our Wall Street.”

Jane Slaughter is a former editor of Labor Notes and co-author of Secrets of a Successful Organizer.
Related
Troublemakers Schooled in Detroit and Philly »
Detroit Postal Workers Push to Dump DeJoy and His Ten-Year Plan »
Detroit Bus Drivers Win Protections Against Virus Through Strike »
GM Workers Ratify Contract Though 'Mixed at Best' »
GM Contract: 'Not What We Struck For' »