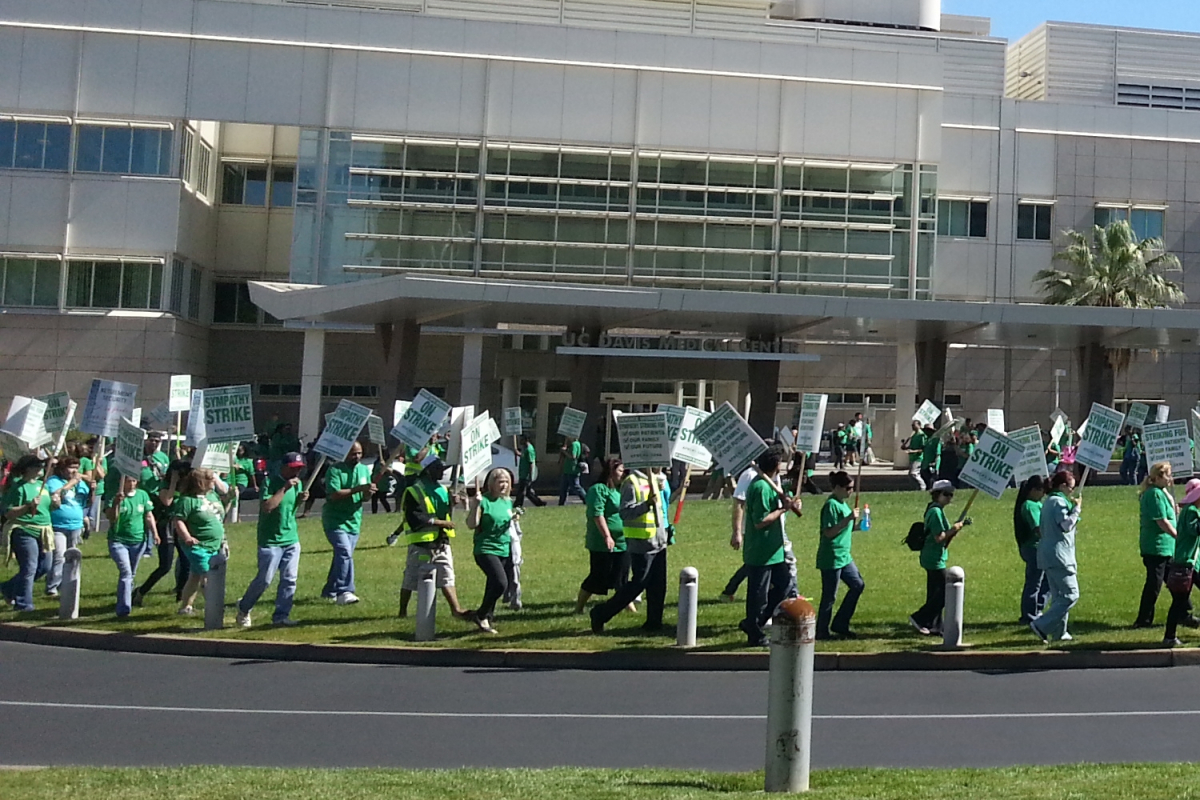 A May 2013 strike at the University of California Davis, near Sacramento, was one of a series that finally secured strong limits on contracting out. Photo: AFSCME 3299.

University of California executives hoped this round of bargaining would extract deep concessions on benefits from 22,000 hospital and campus workers. And like many large university and health care employers, UC wanted to replace full-time work with contingent work by expanding the use of temps and private contractors.

But instead, in contracts signed in February and March, AFSCME Local 3299 won new staffing protections and staved off benefits concessions.

How? The union’s “Member Action Team” (MAT) leaders—members dedicated to organizing their fellow patient care and service workers at 10 campuses, five medical centers, and a laboratory—won a 22-month contract battle with two strikes and record levels of member participation.

The newly elected reform slate headed by President Kathryn Lybarger, a UC Berkeley gardener, set the stage for a different kind of contract fight in January 2012, eight months before the first contract was set to expire.

The idea was to use the power of each bargaining unit—patient care workers’ economic power and service workers’ tradition of militancy—to win stronger contracts for both units.

Patient care workers in the hospitals include nursing assistants, respiratory therapists, radiologic technologists, and surgical technicians, among many other frontline titles. Service workers in the hospitals and on university campuses are custodians, food service workers, laborers, groundskeepers, and maintenance workers, among others. Both were up against UC executives who control hundreds of millions of dollars in annual medical center profits. The money could either be pumped into expansion and into the bloated ranks of management—or into safe staffing.

So the union’s recruitment, development, and tracking of new MAT leaders became the backbone of a comprehensive campaign. MAT leaders are members who commit to organize a specific group of about 10 co-workers for actions.

Staff organizers began by identifying people who were respected by their co-workers, through one-on-one conversations with members in each department. One organizer visited members in the UC Irvine Medical Center labor and delivery department four times to identify the right person to recruit as a MAT leader.

Organizers then got to know these leaders by learning each others’ stories and motivations. “We all have different reasons why we’re involved,” said Monica De Leon, a unit secretary in the labor and delivery department at UCI. “This organizing is personal.” The organizer who recruited De Leon asked her what brought her to work in labor and delivery, and what it would mean to solve her department’s short staffing.

Before recruiting them, organizers gave potential MAT leaders multiple opportunities to demonstrate leadership. De Leon was asked to bring her co-workers to a picket, and to organize her fellow unit secretaries for a departmental meeting.

Next, not only did potential MAT leaders themselves sign a commitment pledge, they also asked co-workers to sign a pledge to participate in actions. This deepened both the MAT leaders’ and their fellow members’ commitment to the contract campaign.

During the campaign, organizers and MAT leaders tracked participation, assessing and expanding the number of workers in touch with a MAT leader. De Leon moved beyond the comfort zone of her own department to organize members in others: nursing, radiology, environmental services.

In less than a year, organizers and MAT leaders identified and recruited a battalion of new ones, bringing the total from fewer than 200 to 600.

Before striking, Local 3299 had to reestablish its right to strike, which the university had challenged. But the Public Employment Relations Board and the Superior Court of California both concluded last May that public sector patient care workers do indeed have the right to strike.

Days after the court’s ruling, patient care workers struck for two days. De Leon says when she arrived at the medical center at 6 a.m. to see hundreds of her co-workers staging their first-ever strike—“the most exciting thing ever”—she knew the union was bound to win.

Both AFSCME service workers and the University Professional and Technical Employees (UPTE) struck in sympathy. UPTE and the California Nurses (CNA) were also in contract talks with UC, and facing the same concession demands AFSCME was. Though they didn’t always agree, the three unions set out to fight the concessions together.

UC implemented its concessionary terms and conditions on patient care and service workers in July and September, respectively.

In November, patient care and service workers struck again—this time a one-day strike over UC’s unfair labor practices of coercion and intimidation committed during the May walkout. Graduate employees in the Auto Workers (UAW) struck in sympathy.

With no end in sight to UC’s stubbornness on AFSCME’s staffing issues—not to mention second-class wage offers—the MAT leaders resolved to keep fighting. But maintaining organization and morale after two strikes and two rounds of implementation required deeper conversations. Organizers house-visited all MAT leaders statewide to prepare for a longer strike.

It was not until service workers announced a five-day strike this February, with patient care workers committing to strike in sympathy, that UC came to the table prepared to meet the service unit’s staffing demands, including new protections against contracting out. The university estimated that this strike would have cost it at least $50 million—on top of the more than $30 million it had spent hiring replacement workers and postponing elective surgeries during the two previous strikes.

While UC was settling with service workers to avert what would have been a third strike, it continued its pattern of bad-faith bargaining with patient care workers. And at the eleventh hour of negotiations, the university introduced a brand new proposal for emergency layoff powers.

Management was demanding the ability to lay off or “call off” workers without notice, for any length of time, for any reason—a loathed provision in many hospital contracts. Building for a third strike forced the university to take emergency layoffs off the table in February, but it reintroduced the proposal by the end of the month.

For De Leon, such layoffs, in already understaffed departments, would compromise the care that she and her co-workers provided for mothers and babies—as well as her ability to care for her own children as a single mother.

“These babies in the hospital are not the only babies that I care about,” she told the UC Regents March 19. “I have two babies at home, too… I’m disappointed that it has come to the point that now emergency layoffs are being brought back to the table.”

Napolitano didn’t even know that UC had kept emergency layoffs on the table in the form of a sneaky side letter proposal. The university executives who were architects of the bad-faith bargaining and coercion had apparently withheld information about the state of negotiations from their new boss.

Lybarger brought the bargaining team’s message directly to Napolitano: a deal is possible only when emergency layoffs come off the table. Three days later—a day before the fourth threatened strike in 10 months—the staffing power-grab did come off the table, and AFSCME 3299 won a patient care agreement.

But 3299’s contracts are most notable for their new staffing protections. To name a few: UC cannot contract out bargaining unit work to undercut its own wages and benefits. UC must give temporary workers career positions once they work 1,000 hours in a 12-month period. UC must not exceed set ratios of temporary to career workers. And by fighting back emergency layoff powers, 3299 strengthened its position in what will be a continuing battle over UC’s efforts to cut hours and positions.

According to an Orange County Register editorial, “UC all but surrendered to union demands.”

De Leon says when she first decided to be more than just a union member and become a MAT leader, she began running through the hospital floors to get workers out to her first picket. “I felt this wave of feeling, something was happening—I was seeing the change.” Over a year later, when she got the news the deal was finally done: “I cried.”

Liz Perlman is executive director of AFSCME 3299. Seth Newton Patel is Local 3299’s lead negotiator and author of “Have We Built the Committee? Advancing Leadership Development in the U.S. Labor Movement,” which appeared in the March 2013 issue of WorkingUSA.