A Seminar on the Labor Movement— With an Opinionated Professor 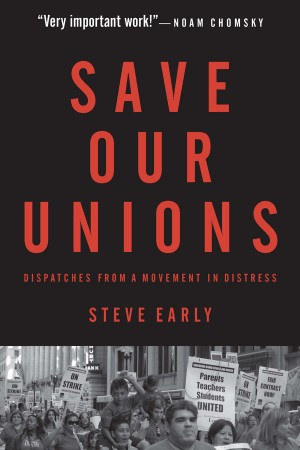 Save our Unions: Dispatches from a Movement in Distress, by Steve Early. 344 pages. Monthly Review Press, 2013.

Reading Save our Unions: Dispatches from a Movement in Distress is like sitting in on a seminar on the modern labor movement—with Steve Early playing the role of opinionated professor.

Research has confirmed that we learn best when we are hearing stories. So the prolific Professor Early wisely builds his Save Our Unions seminar around case studies of labor’s triumphs and tragedies, past and present.

His syllabus is packed with book and film reviews, essays, and interviews, most of them previously published in periodicals, including Labor Notes. One section is based on his decades of experience as an organizer and international representative for the Communication Workers.

But more often and more helpfully, Early furnishes historical and current examples that offer blueprints for the revival of the labor movement and the rise of the working class.

Lessons from Past and Present

Early describes the 1912 Bread and Roses strike in Lawrence, Massachusetts, as an object lesson in how a coalition of recent immigrants, helped by an inclusive organizing union (the Industrial Workers of the World), can pull together.

Leftist organizers’ immersion into the factories and mills of the 1930s is held up as a model for labor-sympathizing young people today to “salt” in unorganized sectors.

And longtime Machinists leader William (“Wimpy”) Winpisinger was the kind of labor leader we need today, Early writes. Winpisinger was unafraid to be labeled a socialist. He called for demilitarization even when some of his union’s members thought their short-term interests were best served by the military-industrial complex.

Winpisinger also did not hesitate to criticize a Democrat president—Jimmy Carter—who disappointed working people. Insert modern analog here, from the 1990s or today.

Early finds inspiration in the Teamsters for a Democratic Union movement, which not only wrestled control away from a corrupt union leadership but also built the grassroots power that fueled the successful 1997 UPS strike.

He is enthralled by the huge protests by foreign-born workers that culminated in the demonstrations and stay-home actions of May 1, 2006—a movement widely considered to have killed off the evil Border Protection, Antiterrorism, and Illegal Immigration Control Act.

Early has a soft spot for Vermont’s embrace of third-party politics and efforts to create a state single-payer health care system, trends he would like to see embraced at a national level. And he sees hope in the grassroots organizing of home health care workers, one of the economy’s most marginalized workforces.

Cross-border collaboration by Western European unions is praised here, as is the growing quality and quantity of online labor journalism.

Democracy Can Save Labor

Above all, Early loves the workers who struggle to move their unions toward internal democracy. Rank-and-file activism saved the labor movement in the 1930s, he says, and it can do so again.

Ironically for a writer known by many readers of the labor press to be a relentless critic of current unions, Early reacts angrily to those who pronounce the death of the labor movement.

In his review of Staying Alive: The 1970’s and the Last Days of the Working Class, Early calls out the author, Cornell professor Jefferson Cowie, for ignoring the decade’s great union democracy campaigns, such as the United Mine Workers’ and Teamsters’ reforms. Early labels Cowie’s account “selective at best, and tinged with cynicism.”

Such cynicism is wholly unjustified today, Early argues, given the bottom-up emergence of the Occupy movement, the Chicago Teachers Union’s community campaign and strike, and even the unsuccessful but energetic protests against labor law roll-backs in Wisconsin. There is much to be hopeful about, he writes, if we can follow the lead of the folks toiling at the grassroots:

Who are the key agents of change on today’s difficult workplace terrain? In yet-to-be unionized work locations, it’s the brave individuals who are joining the new retail, warehouse, and food service worker networks. In unionized workplaces, the tens of thousands of shop stewards who still form the backbone of the labor movement remain key to its revitalization today . . . Their day-to-day organizing activity on the shop floor is what brings unionism to life where it counts the most.

Given Early’s experience in the union movement—and his consumption and review of seemingly every volume written on the topic in the last half-century—this seminar/book would have value even if he were offering insights from a retirement armchair.

But the case-study lessons in Save Our Unions often benefit from Early’s insistence on reporting first-hand from union conventions, town hall meetings, and interviews with workers and activists.

For example, Early’s shoe-leather journalism yields the story of a young hotel worker salt. During lonely days embedded in a hostile workplace, the salt bolstered his spirits by channeling the patience of a guerilla fighter who spent eight years on a mountain toiling as a radio operator during El Salvador’s civil war.

“This hotel is my mountain, and I too have my little role to play in a worldwide struggle,” the worker told Early.

However, Early declines to hide behind the mask of a disinterested reporter. He reliably criticizes most current labor leaders, including those at the head of the AFL-CIO (President Richard Trumka plays a “tabby-cat role” at the White House), the United Auto Workers (“more devoted to dividing and conquering its own members than uniting them in fights with management”), the modern-day Teamsters (“Hoffa’s total compensation is $362,889 a year, at a time when tens of thousands of Teamsters are losing their jobs, pay, or benefits” ), and especially the same top-level folks at the Service Employees (SEIU) whom he thrashed in the pages of The Civil Wars in U.S. Labor.

The recurring theme of Early’s indictments is union leaders’ trampling the will of the rank and file. Workers, he insists, are uniquely capable of cooking up the remedy for labor’s ills. The recipe is a mixture of working class militancy, union democracy, and a far less cozy relationship with Democrats.

Predictably, his critiques have earned Early some push-back. He panned former SEIU organizer Jane McAlevey’s memoir, Raising Expectations (and Raising Hell): My Decade Fighting for the Labor Movement, in a review reproduced in Save Our Unions.

Early labeled the account “self-mythology” by a “progressive prima donna.” McAlevey responded that Early was obsessed with labor turf wars and that his review was “drenched in sexism.”

A UNITE HERE organizer wrote that Early’s account of union salting was “irresponsible, clumsy, selfish, and detrimental to the task of new organizers in the labor movement.”

If this kind of response indicates that some of the students in his seminar are getting a little unruly, Early doesn’t seem to mind. In fact, he provides a link in Save Our Unions to McAlevey’s comments.

His celebration of union democracy underdogs and grassroots reformers suggests he relishes the prospect of his class evolving away from a history lecture into a debate—or better yet, a session on the picket lines.

The immigrant workers of modern-day Lawrence face many of the same struggles the Bread and Roses strikers endured a century ago, he notes in one essay, and writes, “Injustice will not be cured until U.S. workers and their allies find a way to make history again, not just celebrate it.”

As long as we are drawing from the lessons of the labor movement past and present to organize for a more just society, we are passing the Save Our Unions course.

Fran Quigley is a clinical professor at Indiana University McKinney School of Law, where he teaches a workers’ rights clinic. He is the author of How Human Rights Can Build Haiti: The Activists, the Lawyers, and the Grassroots Movement (Vanderbilt University Press, 2014).