Books to Give (or Keep) 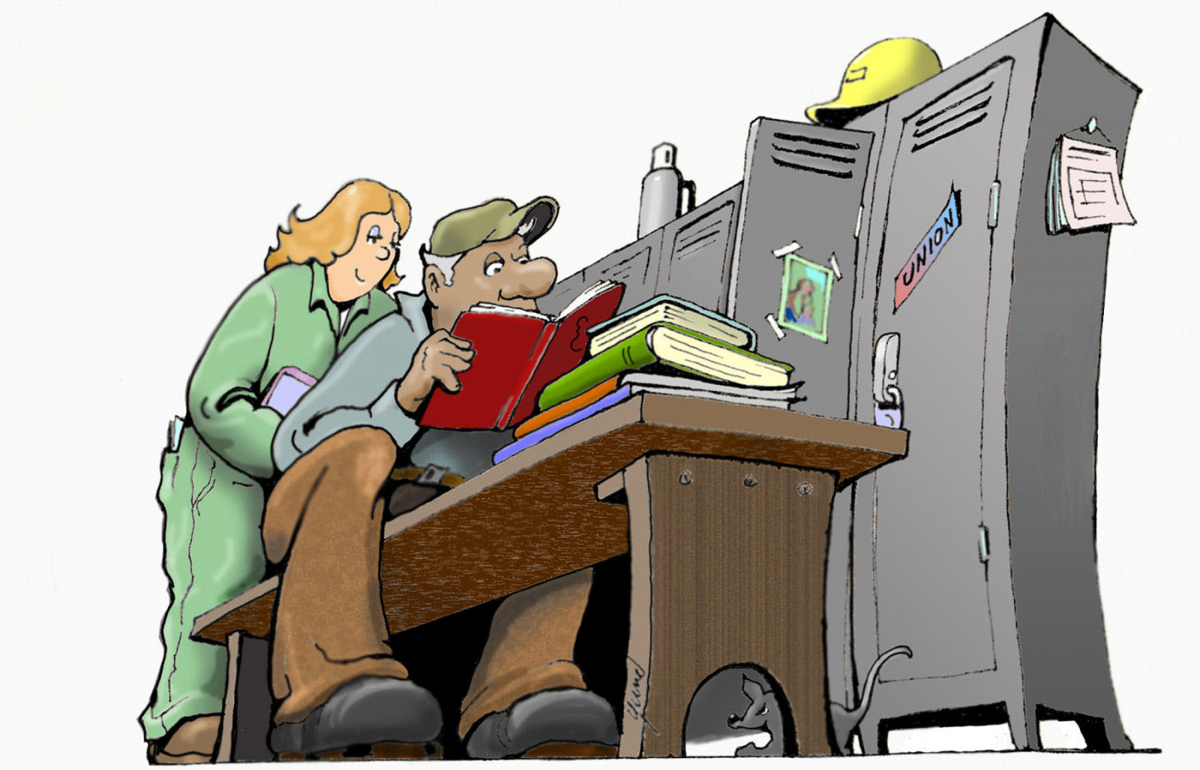 Here are 10 new labor books we reviewed this year, and a slew of classics, too. Cartoon by Bill Yund.

Are you hunting for the perfect gift for the labor bookworms on your list—and you know they’ve already read all the classics?

Or maybe you’re hungry for reading material to tide you over till the upcoming release of Labor Notes’ new book, How to Jump-Start Your Union: Lessons from the Chicago Teachers?

Either way, we’re here to help. Here’s a recap of the great new books Labor Notes has reviewed thus far in 2013:

Barbara Garson’s fascinating and readable Down the Up Escalator: How the 99% Live in the Great Recession, introduces characters ranging from a laid-off hedge fund manager (“the living cliché of this recession”) to an immigrant worker still looking for her chance to get in on the next big capitalist scheme. Garson tells how they, and many others, coped with the crash—and explains the whole securitized, derivatized implosion of the economy in a way that’s easy to follow, putting the blame where it belongs.

Those who’ve read Garson’s earlier books are fans partly because of her chatty, self-deprecating tone, the way she inserts her own knowledge, lack thereof, personal history, and reactions into the story. It keeps us engaged as we’re slowly educated about how the bankers and their allies crashed everything.

With all the right-wing trash talk about unions and working men and women, it’s refreshing to pick up a book that lovingly and accurately documents the dangerous work of an overlooked group—sanitation workers. In Robin Nagle’s Picking Up: On the Streets and Behind the Trucks with the Sanitation Workers of New York City, we discover a treasure trove of information about this often-maligned occupation.

Nagle, who first developed a fascination with all things sanitation as a young girl, has been anthropologist-in-residence at the New York City’s Department of Sanitation—a position she invented—since 2006. She’s worked as a driver of one of the big street-cleaning rigs, spent many hours accompanying sanitation workers on their rounds, and done laborious research to document the department’s history. Did you know the city’s first sanitation workers were slaves? Or that the mortality rate of sanitation workers on the job is roughly double that of firemen and police officers? Now you will.

Airline advertisements of the 1920s presented white male flight attendants as graceful icons of style. But after a wave of flight attendant unionization (and amid an upsurge of homophobia), airlines in the post-war boom discovered they could get women for much cheaper—forcing them to retire at 35, for instance, to reduce pension payouts.

Paul Tiemeyer’s Plane Queer: Labor, Sexuality, and AIDS in the History of Male Flight Attendants begins to outline the extraordinary alliance that emerged between female and gay male flight attendants, who joined forces to fight discrimination and sexual harassment. One memorable story: When National Airlines forced flight attendants to wear “Fly Me” buttons, members made buttons that read “Go Fly Yourself.”

Lenny Moss, a shop steward and janitor at James Madison Medical Center in Philadelphia, is confronted with a number of challenges all at once. The hospital’s new for-profit owner is trying to cut costs and break the union, members are jumping ship—and to top it off, a worker has died, and Moss and his friends suspect foul play.

Moss is the central figure in a series of mystery novels by Timothy Sheard, of which A Bitter Pill is the sixth. There’s a reason Sheard’s novels have been used in steward training classes for years: they show a smart, empathetic, and courageous shop steward… who is also fallible, tired, and overloaded with a combination of work, union issues, problematic friends and fellow workers, and personal domestic and health issues. Not that you know anyone like that!

The books are, in many ways, an extended fictional demonstration of how to “put the movement back in the labor movement” in one workplace. They’re also fun.

Another mystery that also features a shop steward gumshoe is Murder of a Post Office Manager, the debut novel by recently retired postal worker and shop steward Paul Felton. Protagonist Paul Farley (ahem) is dedicated to his fellow workers—more than to the letter of the contract—and works hard off the clock as well as on to understand and represent them. The workforce, rich in diversity and under pressure, comes across as a big, sometimes messy, family, more functional than dysfunctional—and Felton’s detailed descriptions of workplace job actions, both in the plant and in the parking lot, demonstrate the solidarity that continues to inform the work lives of postal workers.

If you work in health care, you’ve probably sat through meetings about checklists—one of the most commonly known safety lessons that health care has been trying to learn from the airline industry.

But there are deeper lessons health care providers could take from the radical overhaul airlines undertook beginning in the 1980s. Accidents were often the result of too-rigid hierarchies. Flights became safer once everyone—whether in cockpit or passenger areas, on the runway, in the hangar, or in air traffic control—had a chance to be listened to respectfully, and heard.

It’s not hard to see how similar measures could help reduce the U.S.’s horrifying rate of medical errors, as Suzanne Gordon, Patrick Mendenhall, and Bonnie Blair O’Connor argue in Beyond the Checklist: What Else Health Care Can Learn from Aviation Teamwork and Safety. Doctors must listen to nurses, transporters, med students, and anyone else who red-flags a potential misstep. Hospitals must create an environment where staff members feel free to challenge a physician or complain to an administrator. Democracy—it’s not only fairer, but safer too!

Health care workers commonly take pride in being caregivers. So how do they see the question of joining unions? Adam Reich explores that question in With God on Our Side: The Struggle for Workers’ Rights in a Catholic Hospital, focusing on the story of Santa Rosa Memorial Hospital in California. Caregivers there were so committed to unionizing that they kept up the effort even through the internal turmoil, trusteeship, and fracture of the union they’d begun organizing with.

Eventually the group won a contract with the upstart National Union of Healthcare Workers—and Reich concludes that joining the grassroots union, which had limited resources, heightened the workers’ commitment and perhaps strengthened their resolve to build a truly worker-controlled, bottom-up organization.

It’s no secret that the last 30 years have seen a brutal corporate assault on U.S. workers. This class war has largely been one-sided—but not entirely. For the activist on your list who’s feeling a little down, what could be more energizing than the frequently inspiring collection of interviews and essays Jobs with Justice: 25 Years, 25 Voices?

Forty contributors describe campaigns ranging from strikes and union organizing drives to health care, living wage, and anti-discrimination efforts, where the coalition Jobs with Justice has played a pivotal role in winning—tracing the group’s history and pointing toward what could be a promising future. Take heart: JwJ demonstrates that the workers’ movement is still lively, innovative, and capable of resistance.

Woolworth’s was the Walmart of its day in 1937, when 108 young women struck and occupied their Detroit store for seven days and won “an entire laundry list of demands, including the laundry,” as Dana Frank puts it in Women Strikers Occupy Chain Store, Win Big: The 1937 Woolworth’s Sit-Down.

Just hours after the cry of “Strike, girls, strike!” went up, “the eyes of the nation would be riveted on these young women,” Frank writes. “They had, after all, taken on one of the biggest corporate and consumer icons of the century, with two thousand stores in five countries—it was like striking Walmart, the Gap, and McDonald’s all at the same time.”

It’s an exhilarating tale. There’s plenty of fodder here to inspire reflection in all of us… especially those organizing at Walmart or McDonald’s today.

Finally, one we excerpted rather than reviewed: Every U.S. school child learns the opening words of Dr. King’s “I Have a Dream” speech, but how many are taught that the 1963 March for Jobs and Freedom where he delivered those words was the brainchild of the nation’s leading black labor activists?

How many know the march called not only for an end to prejudice, but also for a federal jobs program, equality at work, and a boost to the minimum wage? William P. Jones’s The March on Washington: Jobs, Freedom, and the Forgotten History of Civil Rights puts the historic day in its organizing context, showing how it grew out of black unionists’ work through the 1950s against discrimination in hiring, on the job, and in unions.

Over time, they brought about remarkable change—not least, in the AFL-CIO. At that time the federation was still defending segregation within its ranks. This year, its members blanketed the National Mall to celebrate and recommit to the struggle for racial justice.

Alexandra Bradbury is the editor of Labor Notes.al@labornotes.org
Related
A Nurse’s Story: My True Cost of the Pandemic »
Labor Must Rise Against Vaccine Apartheid »
Striking Massachusetts Nurses Outwait Corporate Giant Tenet »
Who Might Strike in 2022? Hundreds of Big Contracts Will Be Up »
Review: How Labor Can Stop ‘The Privatization of Everything’ »