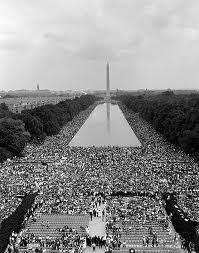 The 1963 March on Washington was a March for Jobs and Freedom—it was about public works to create jobs and a hike in the minimum wage, as well as anti-discrimination demands.

The two big commemorations of the 1963 March on Washington this August had their own spin on history. Both de-emphasized the centrality of the labor movement in the civil rights struggle. All they asked us to honor was a well-attended march where great speeches were given.

In reality, the 1963 march represented much more, which has generally been written out of history.

The civil rights movement of the 1960s included forces beyond labor, but labor was at its core. That was because occupational Jim Crow—the system that defines how work is organized in the U.S., with workers of color holding second-class status in jobs and hiring—was the political and economic core of legal Jim Crow, and of the long war of repression on black communities.

Occupational Jim Crow was also the system on which the AFL was organized. The AFL was oriented towards narrow organizing of its constituents, the skilled craft workers. And though there had been changes starting in the 1930s with the rise of the CIO, by the ’60s AFL-CIO leaders were still committed to organizing just those constituents; they still maintained a culture of racism. Thus building the labor movement itself demanded breaking the Jim Crow system.

The March on Washington Movement had actually started in 1941 as a black workers’ movement against occupational Jim Crow. The demand was to stop racist hiring practices among industries and contractors doing business with the U.S. government.

Its leader was A. Philip Randolph, founding president of the Brotherhood of Sleeping Car Porters, who would later become both president of the Negro American Labor Council and a vice president of the AFL-CIO. Randolph was a lifelong fighter against occupational Jim Crow; his work included supporting black workers fighting their way into racist unions.

The 1941 march was called off and yet victorious. President Franklin D. Roosevelt made the concessions and signed an executive order to end discrimination in war industries. Other marches were planned in the 1940s and, again, various concessions were made to prevent them.

In the 1950s, notably starting with the Montgomery bus boycott, the African-American freedom movement took a turn toward tactics that had been pioneered by the labor movement. There was less reliance on symbolic pickets, negotiations, and legal challenges, and a greater emphasis on socially and economically disruptive mass actions—strikes, boycotts, and occupations, commonly called sit-ins in the 1960s. These became the favored tactics of the movement.

Randolph and Bayard Rustin of the War Resisters League, who had been organizing through the 1940s, had a network of labor radicals and civil rights supporters already working for a March on Washington for Jobs and Freedom in advance of broader, mainstream organizations like the NAACP. The backlash of violence throughout the South, including the assassination of Medgar Evers in Mississippi in June 1963, raised the motivation for mass action.

Dissatisfaction with the Kennedy administration (which had campaigned under a civil rights banner, but was slow to move with anything productive) among sectors of civil rights activists and the black community also played a role.

Organizing for the march started with labor leaders calling for public works programs to fight black unemployment. Then other leaders joined the effort, including some mainstream leaders of the freedom movement. In summer 1963, a leadership council was formed that included the Congress of Racial Equality (CORE), Student Nonviolent Coordinating Committee (SNCC), Urban League, NAACP, and Southern Christian Leadership Conference (SCLC).

They did not agree on the purpose of the march: the NAACP and the Urban League were supporting the Kennedy administration for the legislation they hoped it would pass; SNCC and CORE were protesting the administration's slowness and inaction; SCLC and the network of labor organizers associated with Randolph saw the need to build a movement with labor and economic issues at its core. However, they did arrive at several common goals:

Worker Issues on a Par

The labor trend in the March on Washington coalition was represented by A. Phillip Randolph and Dr. Martin Luther King Jr. and was the only trend that did not define the march—or the movement that needed to be built—in terms of existing organizations or political entities. They did not see the movement as defined by being for or against the Kennedy administration, nor the Dixiecrats, nor even the unions.

The labor trend was for raising the fight for jobs, breaking occupational Jim Crow, and unionization to be on a par with the fight against segregation and discrimination and for voting rights. They knew they would need to build a broad movement of working class communities to carry out such a fight.

By 1963, A. Philip Randolph had been leading and organizing the labor trend for more than 40 years, by mobilizing black workers to unionize and to fight occupational Jim Crow. The 1963 March on Washington raised labor's profile within the civil rights movement. It was the first Randolph-led mobilization that encouraged the mobilization of white people. The network of white workers who mobilized for the March were drawn closer to the labor trend in the civil rights movement and became themselves advocates that the labor movement should be a social movement.

Dr. King represented a new generation of leadership for the labor trend, an impact that lasted far beyond his assassination in 1968. “The two most dynamic and cohesive liberal forces in the country are the labor movement and the Negro freedom movement,” he said. “Together we can be architects of democracy in a South now rapidly industrializing. Together we can re-tool the political structure of the South, sending to Congress steadfast liberals who, joining with those from Northern industrial states, will extend the frontiers of democracy for the whole nation.”

The assassination of Dr. King meant that more conservative leaders could lower the labor profile of the civil rights movement. A. Philip Randolph has been moved to the back burner of history, while Dr. King has been whitewashed and his most important labor content excised.

Today, those of us trying to build unions as social justice organizations know that our strength lies in thousands of activists and the organizations they build inside and outside of the established unions. That’s the strategy Randolph and King used to push both the labor movement and the civil rights movement to tackle occupational Jim Crow.

We have to recover that movement where we can, and this starts by reclaiming our history.

For a further look at the Brotherhood of Sleeping Car Porters and its sister organization the Colored Women's Economic Council, read labor historian Peter Rachleff's article here. Rachleff adds, "Randolph’s longtime associate, Bayard Rustin, chose January 1, 1963 – the 100th anniversary of Lincoln’s issuance of the Emancipation Proclamation – to present Randolph and leaders of the newly organized Negro American Labor Council a plan for a national march and action in Washington, D.C., on August 28 – the anniversary of the murder of Emmet Till."

Related
Richard Trumka, 1949-2021 »
Pandemic Discrimination Against Asian Americans Has Long Roots »
Communications Workers Fight Telecom Giant for MLK Day Off »
Here's How to Join Labor's Anti-Coup Network »
How to Fight a Coup: The Role of the Workers’ Movement »