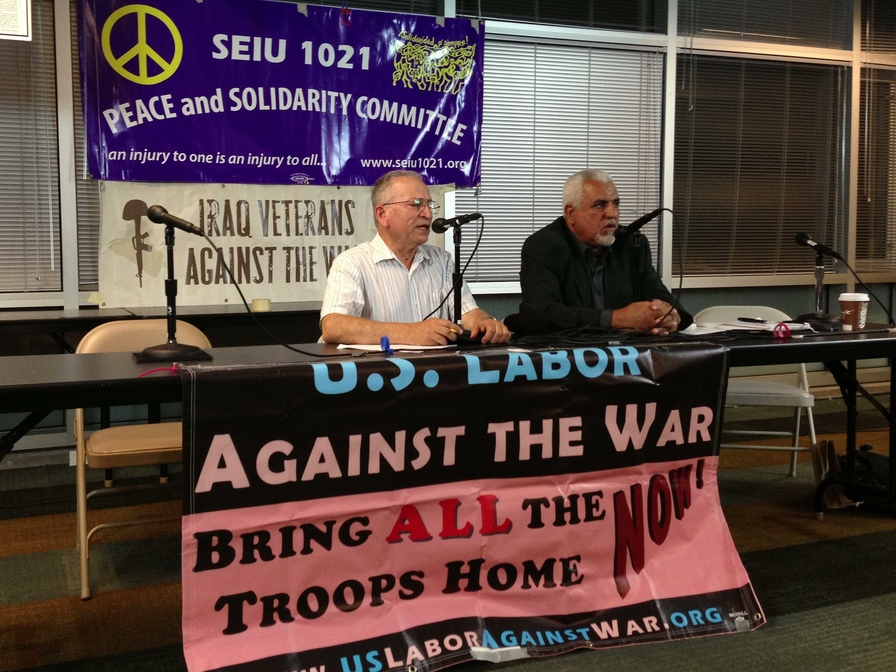 “I have a wish,” Hassan Juma’a Awad Sdawe told an audience of New York labor activists last night, “and this wish involves you.”

Sdawe is president of the 23,000-member Iraq Federation of Oil Unions. He and six other Arab labor leaders are

And it has to be “a position that doesn’t come too late,” he added. “We need to nip this in the bud.”

Sdawe knows the value of international solidarity firsthand. He was recently prosecuted for allegedly advocating a strike—and he credits support from U.S. labor activists for the July 1 dismissal of his case. However, the government is appealing, and Sdawe will be tried again when he gets back to Iraq. He faces three years in prison.

U.S. Labor Against the War, which sponsored Sdawe’s visit and is circulating the Arab unionists’ statement on Syria, has been collaborating with Iraq’s labor movement throughout the decade since the U.S. invasion began in 2003. In his trips to the U.S., Sdawe has found “a tremendous gap” between the U.S. government and the mostly anti-war Americans he has met.

Simple actions of support can be surprisingly effective. The letters USLAW has gathered from Congressmembers—with copies to the U.S. Secretary of State and the powerful U.S. ambassador in Iraq—have really made the Iraqi government take notice, according to Sdawe.

On Syria, “it’s those kinds of letters we need,” he said.

In their statement, Sdawe and six other Middle Eastern and North African labor leaders who attended the AFL-CIO convention laid out why they believe bombing would be a huge mistake, and urged American workers “in the spirit of solidarity, to exert your best efforts to convince your government to refrain from striking Syria.”

A commitment to peace, they wrote, should be “a grounding principle of the global labor movement.”

Bombing Syria could “ignite a regional war,” the labor leaders wrote, “which will carry dangerous ramifications and disastrous outcomes that reach beyond Syrian borders.” As Sdawe put it, “the region is in flux.” He said a strike on Syria would definitely affect Iraq, already host to hundreds of thousands of Syrian refugees.

And he doesn’t want to see Syria go through what Iraq has gone through over the past decade. Though U.S. military operations in Iraq are officially over, the horrific aftermath continues to play out. In his travels around the oil fields, he still finds munitions marked “Danger: Radioactive.”

The ongoing impact of depleted uranium is causing some babies to be born with debilitating health problems. Sdawe said any family expecting a baby spends nine stressful months wondering whether their newborn will be okay—since hospitals are not equipped to test during pregnancies.

Iraqi workers have been without the protection of any labor law since a maneuver by longtime dictator Saddam Hussein in 1987, Sdawe explained. The absence of labor law makes union leaders vulnerable to legal persecution and prevents them from even collecting dues.

When U.S. diplomat Paul Bremer became Administrator of Iraq, effectively the head of state, he could have issued a labor law immediately, Sdawe pointed out wryly. After all, Bremer “issued dozens, if not hundreds, of laws—and many if not most of these laws really did no service to the Iraqi people.”

Sdawe has worked 40 years in Iraq’s oil fields. A lively speaker with a dry wit, he spoke in Arabic with an interpreter. Like most workers in Iraq, he is technically in the public sector: his paycheck comes from the government, though foreign corporations oversee the oil operations—and are profiting handsomely.

Workers struggled for years to get rid of the Hussein regime, Sdawe said. But that didn’t mean they welcomed the U.S. invasion and occupation: “We never for a moment wanted the fall of Baghdad to take place in this way.”

He believes Iraq’s immense oil riches—3.25 million barrels produced per day—were “the primary reason for the invasion.” Hussein’s wars against Iran and Kuwait destroyed Iraq’s manufacturing and farming capacity—leaving oil its only industry.

Despite Iraq’s oil wealth, citizens still lack the most basic services. The average person gets only three to four hours of electricity per day, Sdawe said—though the U.S. spent $60 billion on reconstruction after the invasion. “So how is it that Iraqis have no electricity?” he asked. “Clearly there is another agenda at work, and of course our corrupt politicians are part of this agenda.”

The economic crisis in Iraq, Sdawe said, is as bad as or worse than the one U.S. workers face. Even oil workers often don’t own their own homes, and struggle to support their families on very low wages.

Thorn in the Side

The oil unions have been a thorn in the side of the occupying force, speaking out against the licensing of foreign corporations to plunder Iraq’s oil wealth.

“It’s completely absurd to give out 20-year contracts,” Sdawe said. “This is called throwing away the resources of future generations.”

The government has responded with repression. Organizers allegedly involved with an oil refinery strike were recently sued and fined 30 million dinars each. If they don’t pay, they go to prison. “Now we are wondering how we can raise the money to pay the fines and save these leaders from prison,” Sdawe said.

Iraq’s unions have spent the decade steadily pushing for a labor law, despite political obstacles and repeated setbacks. They are pressing for a vote in the current parliament; otherwise, they will have to wait another four years.

Sdawe has met with the prime minister, asking the government to pay for chemotherapy for 19 members of his union who contracted cancer, possibly from nuclear munitions. No response. Half those members have since died, he said.

Asked about the current status of the U.S. occupation, Sdawe said, “There are no formal military operations in Iraq [now], and we shouldn’t make anything up. But what would you say if I said the U.S. embassy in Baghdad was the largest in the world?”

The embassy has about 15,000 employees, he said. And something like 120 private security firms operate in the country—in some areas, they are even in charge of enforcing traffic laws.

Sdawe blames the invading force for igniting the current sectarian strife between Sunni and Shi’a, which has not always plagued the country. Before the war, “Iraq had a very strong social fabric,” he said. “To be honest, these words Sunni and Shi’a are almost new to Iraq.” But the Bremer government set up “a sectarian logic to the rotation of power,” fueling the rivalries that have intensified since.

“Clearly there is an interest, by those who want to cash in on the Iraqi cash cow, to keep Iraqis divided,” he said.

U.S. Labor Against the War is seeking signatures on a petition against invading Syria, as well as donations to its Iraq Labor Solidarity Fund.

Alexandra Bradbury is editor and co-director of Labor Notes.al@labornotes.org
Related
Book Review: Hardhats, Hippies, and Hawks »
Turkish Unionists: 'We Are Not Terrorists' »
Union Leaders Arrested in Bahrain Crackdown »
Egypt: ‘Our Ability to Resist Is Our Guarantee’ »
Is U.S. Pulling Plug on Iraqi Workers? »