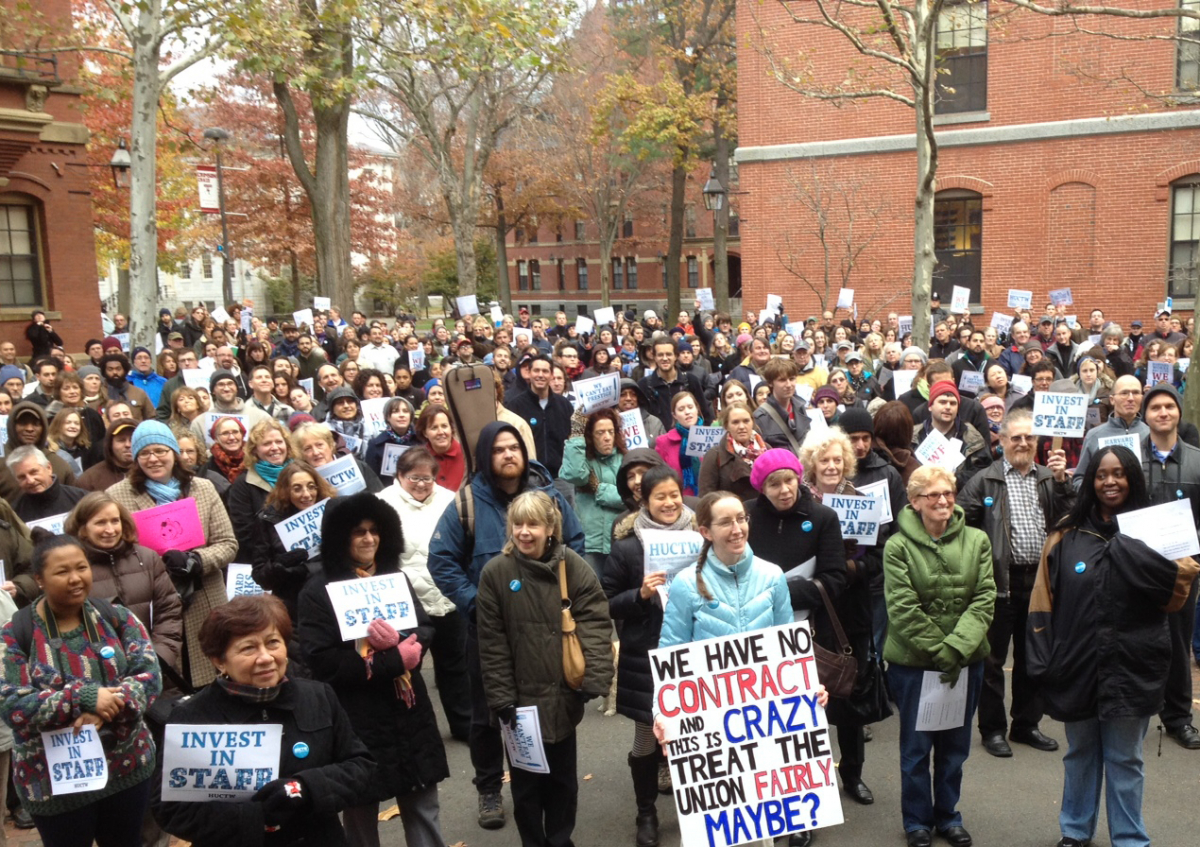 With an endowment of $32 billion, Harvard is the wealthiest university in the world. Upon rebounding from the recession, the university is remodeling all its dorms, expanding its online course program, and constructing a new science center. Its library workers, meanwhile, have gotten the short end of the stick.

Workers beat back threatened mass layoffs last spring, but are now enduring the consolidation of their work in a new “shared services” model that translates into bigger workloads and fragmented work relationships. Now, along with the rest of Harvard’s clerical and technical employees, library workers are mobilizing for a fair—and long-overdue—contract.

With more than 55 miles of bookshelves, Harvard boasts the largest academic library system in the world. Its range of archives and specialized resources are a major draw for scholars and the backbone of the university’s academic culture.

Nonetheless, university leaders concluded last spring that the Library was lagging behind the “evolving expectations of the 21st century scholar.” Their restructuring initiative, launched with hype more typical of a social media IPO than of a library, has been a blow to workers and patrons alike.

In its initial cost-cutting, Harvard offered 280 workers an early retirement incentive, which 63 accepted—further shrinking a workforce already down to 900, from 1,200 in 2009.

Activists credit persistent action—including a March picket in the blinding snow and a rally during commencement—for holding the number of direct library layoffs below 10.

Staff cuts are only one plank of a broader shift in Library governance. At the recommendation of a management consulting firm and a two-year in-house study, the 73 libraries on campus have been merged into one “Harvard Library.”

A subset of workers—access services and technical services—have new duties, and in some cases new worksites, as part of a “shared services” structure. These workers run the Library’s bread-and-butter operations: cataloging books, responding to patron inquiries, supervising student workers, managing the library’s website, and processing book loans from other universities.

Others see university policy differently. “This is not about some neutral process called ‘modernization,’ as the administration would have it,” says Rudi Batzell, a graduate student in history. Batzell thinks Harvard is shifting resources away from low-return fields—the humanities and social sciences—towards “more costly but also more profitable, high-return sectors, such as the hard sciences, pharma, bio-engineering.”

The data support Batzell. The university’s latest financial report shows an uptick in staffing for cell biology, chemistry, and applied sciences, but declines in the Library and other non-science divisions.

A “shared services” model often entails de-skilling. At a number of universities, converting to a shared-services model for academic departments has detached workers from their localized knowledge and stripped their workplaces of the relationships that help the departments function.

For example, a worker who deals with finances, student advising, and logistics for a particular department, and has years of ingrained department-specific expertise, could be reassigned to several departments to do only financial work. In the case of the University of California at Berkeley, shared-service workers are being relocated to a different building far away from the departments and divisions they used to serve.

“People who you’ve worked side by side with for years are classed as a completely different type of worker,” says Desiree Goodwin, a circulation supervisor and 18-year veteran who is part of Harvard’s new structure. “I just discovered that they are going to send me to work at another library for a few hours. You don’t work at a single site, you work at sites all over campus.”

Goodwin adds that she is no longer responsible for responding to inquiries from patrons about reference and research materials, which her professional library degree qualifies her to do.

Even before the libraries’ wholesale makeover, workers could cite issues with service after earlier rounds of restructuring and cuts. Smaller libraries are understaffed, often down to only one person on duty. The proportion of temp and student workers, who require significant training from permanent staff, has sharply increased. Outsourcing to external vendors and changes in cataloging have made filing and finding books more difficult.

Under the revamped system, workers face even greater workloads and new forms of micromanagement. Karen O’Brien says that this fall, for the first time in her 25 years at Harvard, managers are receiving notices of employees’ “error rates,” which, she says, could be a way of weeding out “under-performing” staff.

Under a similar push in University Financial Services, employees have been fired for not processing invoices fast enough. The logic of the performance measurements—employees must work at or above average speed 75 percent of the time—makes it impossible for everyone to succeed.

Meanwhile, most workers aren’t getting paid any extra to work under the new system.

The full-time non-managerial staff who remain at the Library make up a quarter of AFSCME Local 3650, the Harvard Union of Clerical and Technical Workers (HUCTW).

The union has been without a contract since July 2012, and negotiations are stuck in the mud. According to staff organizer and former clerical worker Carrie Barbash, wages and health care are the main sticking points. Wages would remain largely stagnant under university proposals, and employee health plan contributions would go up—hitting lowest-paid staff the hardest.

Over the fall, workers gathered for rallies, flyered outside major Harvard events, and drafted hundreds of letters and holiday cards to the administration to push for a fair contract. This spring, Barbash says, the union is planning to bring in mediators while ramping up actions.

Last spring, rank-and-file activists staged rolling protests. “Many of the library workers who may have sat on the sidelines in the past came out in huge numbers,” says Geoff Carens, a reference and multimedia librarian and a leader of the Reform-HUCTW caucus. “The fact that we did the number of rallies that we did, particularly at commencement, probably held off the worst.”

The reform caucus, Carens says, has been around “pretty much as long as the local has existed.” It calls for more membership meetings, encourages pickets to defend workers, and opposes all layoffs.

Workers protesting the layoffs enjoyed support from students, faculty, maintenance and dining staff, and even non-union librarians and department managers.

Occupy Harvard, a collective of students and workers, waged an open-hours occupation at the Lamont Library Café for a week last February. There, students and staff hosted think tanks and workshops on the role of the Library and the needs of patrons and staff. They also phonebanked alumni and donors to speak out against the cuts.

A. Abbott Ikeler, a 1965 Harvard grad and retired English professor, wrote to President Drew Faust, “To dismiss outright, rather than retain and if necessary retrain, numbers of long-serving, hard-working library employees strikes me as an exercise perhaps worthy of a jumped-up, for-profit organization.”

Another source of resistance (whose membership overlaps with other efforts) is the Library Forum, founded last spring as a space for staff, faculty, and students to assert their stake in university policy.

Calling for “a library with a human face,” members wrote in an April vision statement: “It will look to the values of its own community of users and workers…and not to business consultants and statistical comparisons.”

James Cersonsky is a Philadelphia-based writer and labor activist. Find him on Twitter @cersonsky.