Striking Chicago Teachers: Kids Are More than a Test Score 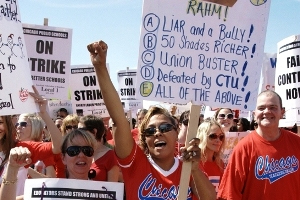 With union delegates scheduled to meet Friday afternoon, a settlement may be near in the Chicago teachers’ strike. What will teachers look for? Winning a fair evaluation system has emerged as a top priority. Photo: AFL-CIO.

With union delegates scheduled to meet Friday afternoon, a settlement may be near in the Chicago teachers’ strike.

The union’s House of Delegates, which will meet at 2 p.m., must approve any tentative agreement. The union said the meeting would update delegates on developments in contract talks, and promised a big “Wisconsin-style” rally for noon Saturday.

What are teachers looking for in a settlement? Winning a fair evaluation system has emerged as a top priority. The school board has been pushing one in which 40 percent of a teacher’s grade would be based on students’ standardized test scores.

Teachers say this is unfair, arguing that student test scores do not and cannot show how good a teacher is. They also point out that some subjects, such as art and music, and some students, like those with special needs, are wholly unsuited to the bubble-sheet treatment.

Test-based evaluations in other cities have sometimes produced strange results.

Earlier this year, student scores were compiled into teacher data reports to gauge the effectiveness of New York City teachers. The reports, which use a controversial statistic called “value-added modeling,” had margins of error bordering on the absurd—more than 53 points out of 100.

With odds like that, superior teachers were just as likely to be labeled “below average” as they were to get an accurate report and bad teachers had a decent chance of getting labeled “average” or better.

She says teachers see fluctuation in scores from year to year based simply on who they have in class.

“One year, my student tests scores didn’t increase much, but the next year they went up a lot. It really just depends on the group of kids, their attitude toward the tests, whether they value them,” she said.

Special education teacher Katie Morgan’s experience shows just how far removed such tests can be from what goes on in a classroom.

She works with the district’s lowest-functioning students. Though they have severe developmental disabilities, she’s still required to give standardized tests to kids who “can’t feed or toilet themselves.”

Though modifications are made—she asks questions aloud and shows pictures the students can point to in response—she says the tests are totally inappropriate for the kids she works with.

“I have high school-age students who wear diapers, who haven’t mastered independent life skills,” she says. “How are they going to show progress on a test?”

But high-stakes testing for students and test-based teacher evaluations have been a major priority for the education bureaucracy and the billionaire-backed foundations intent on pumping corporate ideas into the public school system.

In order to qualify for funding under the federal Race to the Top grant program, states must mandate that a “significant portion” of teacher evaluations be based on student standardized test scores.

In Illinois, a teacher evaluation law passed in 2010 made this a state requirement and established a four-category ranking system for teachers: excellent, proficient, needs improvement, unsatisfactory.

The Chicago school board’s last public proposal in negotiations with the union would make it easier to fire teachers, especially those in the “needs improvement” category.

Chicago Teachers Union Vice President Jesse Sharkey said in a press conference Sunday that the board’s proposals could put nearly 30 percent of the union’s membership in danger of losing their jobs within the next two years.

In Washington, D.C., the former schools chief Michelle Rhee—beloved by corporate education interests—instituted rules that based half of teacher evaluations on tests. She used the results to fire hundreds of teachers, including outspoken critics, a move that drew the ire of students—who walked out of several schools in protest.

It’s not that teachers don’t believe in accountability, as many anti-union groups have alleged.

It’s that test-based evaluations give corporate reformers another statistic to bolster their claim that public schools are failing due to “bad teachers,” even if those statistics are fraught with error.

If so-called bad teachers can be identified through test scores, the argument goes, then with the wave of a wand and a pink slip, struggling schools can be fixed.

In reality, though, teachers say these test-based statistics “are filled with junk science,” as high school teacher Curt Maslanka puts it. Reviews by the National Research Council, part of the National Academy of Sciences, have declared the statistical models “not ready for use in high-stakes decisions.”

Maslanka opposes the increased weight given to “student growth” on tests even though his students’ scores meet all the district’s requirements. “I hate that it’s come down to this,” he says.

He worries about scores not because he doubts his own teaching abilities but because he’s an experienced teacher on the high end of the salary scale. He knows how eager administrators are to let go of senior teachers in favor of low-cost new ones—who are more likely to go along with whatever the principal wants.

José Patino, a senior at Chicago’s Gage Park High School, says good teachers are already too often dismissed. “I’ve had a lot of great English teachers,” he said. “The problem is, they always get fired.”

Patino says you can’t measure good teaching with a number. “The best ones tell me to keep writing, keep having fun,” he said.

MORE THAN A NUMBER

Chicago students are pushing back against high-stakes testing for their own futures as well. On Wednesday morning, more than 150 students and parents rallied with teachers on the Wells High School picket line to speak out against the barrage of standardized tests they’re forced to undergo.

High school student members of Voices of Youth in Chicago Education, a city-wide youth organizing project, presented their research showing that students at Wells will spend 12,000 hours in district-mandated testing this year.

Holding a chain of 12,000 pencils to represent the hours of lost learning time and chanting “1-2-3-4, more than just a testing score!” students talked about how a focus on high-stakes testing was compromising their education.

Brittany Cannon, a recent high school graduate and member of the community groups Blocks Together, said schools routinely game the system to improve their scores, and students suffer the consequences.

Those who test poorly are often suspended as test day nears, a phenomenon common enough to have a name: pushout.

When it’s time to take a test, Cannon said, “students go missing and the only ones around are those who can perform well.”

The groups have raised alarms over the school-to-prison pipeline, where children in communities of color are pushed away from overstretched schools and right into a well-resourced criminal-justice system. The tests, they say, become one more tripwire.

“If we fail one, we might not be promoted to the next grade level. It means you’re done,” says Yaquelin Rodriguez, a senior at Gage Park High.

Jennifer Lagundoye is both a freshman English teacher at Wells and the mother of a public school student. She knows firsthand how the pressure of high-stakes testing can push students to the breaking point.

“She had panic attacks,” Lagundoye said. “I got a call every other day saying I had to come and get her because she was crying hysterically and couldn’t calm down. We thought it was asthma but found out it was really just all the stress.”

In recent months, national backlash against high-stakes testing has been mounting.

In Texas, 70 percent of school boards have passed a resolution that says high-stakes testing is “strangling our public schools and undermining any chance that educators have to transform a traditional system of schooling into a broad range of learning experiences that better prepares our students to live successfully and be competitive on a global stage.”

The resolution calls on the state to develop a system of varied assessments, respect the role of teachers in developing curriculum, and instill “a sense of inquiry and love of learning in all students.”

Jerry Weast, superintendent of the Montgomery County School District in Maryland, has refused to alter teacher evaluations to focus on test scores, giving up $12 million in federal Race to the Top funding.

The district’s peer-review program eschews test scores in favor of matching struggling teachers with veteran mentors to help them improve. Only if mentoring is unsuccessful does a hybrid teacher/principal panel vote to discipline or dismiss the teacher.

The CTU has backed the Montgomery schools’ approach to evaluation, praising its multi-year approach and peer support.

Chicago teachers and students alike want to see better teaching in their schools, not dumbed down test prep.

“I’m doing this for my little brother. He’s nine,” Patino said. “I don’t want him to be raised in the same system I was.”