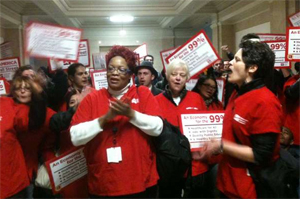 When Chicago’s “Mayor 1%” Rahm Emanuel threatened to derail the National Nurses United rally this Friday, NNU didn’t back down.

The rally calling for a tax on Wall Street financial transactions is just one of dozens of events sparked by the gathering of the NATO security alliance in Chicago starting May 20, which Occupy is targeting as the “military wing of the 1%.” The meeting was originally called in conjunction with a gathering of the G8, the group of eight wealthy nations that are pushing austerity measures worldwide as the solution to the economic crisis.

When huge protests appeared likely in Chicago, the G8 moved its meeting to Camp David, the president’s retreat near D.C., with its commanding security capabilities. But the nurses—along with Occupy and many social-movement groups—stuck to their plans to present their alternatives on the streets of the Windy City.

Emanuel then said he needed to move the rally away from the downtown core because rocker Tom Morello, scheduled to perform, would bring overflow crowds. The nurses’ blistering response backed the mayor down, helped along by local press reports noting the many other instances where tens of thousands have streamed into busy downtown plazas to protest or to celebrate.

We spoke to Martese Chism, an NNU delegate and 20-year hemo dialysis nurse at Stroger Hospital in Chicago, about the standoff.

LN: Why did Emanuel reverse his decision and allow the rally?

MC: People don’t like it when you attack nurses. He got bad PR, and there was a backlash.

LN: Why is NNU pushing the financial transaction tax?

MC: We call it the Robin Hood tax, and we think it could heal America, with $350 billion a year to repair infrastructure, create jobs, pay for health care for all, and fix state budgets. It’s a solution that could be done now. It’s like a hospital—we’re dealing with critical care. America could flatline, and the Robin Hood tax would get America off life support and get us rolling again.

LN: What do you mean, flatlining?

MC: In Washington, D.C., everything is gridlocked. You can only be on life support for so long.

At my hospital, I’m seeing a lot of people with their blood pressure up, their stress up. They have skills but there are no jobs. Their home is in foreclosure.

My co-workers are taking care of patients and their own families who are dealing with this crisis. Their spouse lost a job, their children graduated and they can’t find one. Sometimes nurses are the only one working in the family, so they’re pulling a lot of extra shifts. That’s the stress I’m seeing. It’s not good for the patients or for the nurses.

LN: Why go up against Wall Street? They’ve got the deep pockets, they’ve bought all the right politicians.

MC: Wall Street caused this crisis and Wall Street should be held accountable. When they got in trouble we bailed them out. They’re doing pretty good now and they need to bail out Main Street. We should take care of each other.

LN: What do you say to those who say taxing them will slow down investment and harm the economy?

MC: The way I understand history, financial transactions taxes helped move the economy forward after World War II. They exist in other countries, too. And when I listen to Mitt Romney say, “is America doing better?,” I just think, what we’re doing now is not working. JP Morgan just gambled $2 billion and lost. Instead of taking a risk and speculating like that, writing off $2 billion, why not put that back into our communities?

LN: Rahm Emanuel might not like the tax because he’s a Wall Street guy. But it’s not just nurses—he doesn’t like teachers, transit workers, anybody who performs a public service. Is this fight a sign of things to come?

MC: Rahm Emanuel wants to blame deficits on public workers. He’s saying that public worker pensions are more than $100,000 a year. We don’t make that kind of money. It’s just false. He needs to back up off the workers.

His ideas for job creation are poverty-wage jobs. They’re not enough to pay student loans, buy a mortgage, pay for your health care. It’s not enough.

LN: Chicago teachers are threatening to strike over Emanuel’s agenda to close schools, privatize, and force concessions on the union. And your hospital is facing tough negotiations this fall, too. How are you working together against these attacks?

MC: Since October we’ve been working with Occupy-labor outreach, sending someone to every meeting. We’ve been getting together with the teachers, transit workers, and postal workers. If the teachers take a strike vote we will be there to support them.

LN: Funny how Emanuel can find money for a huge number of police for this weekend’s protests but he can’t find money for public services and public workers.

MC: Politicians are focused on staying in power and on the 1%’s agenda. We need to put their backs up against a wall—without a social movement they won’t budge.

Mischa Gaus was the editor of Labor Notes from 2008 to 2012.mischagaus@gmail.com
Related
After Strike Threat, Wisconsin Nurses Get a Possible Path to Union Recognition »
Wisconsin Nurses Set to Strike, As Employer Claims It's Banned from Bargaining »
Stung by Ascension's Union-Busting, Michigan Nurses Gird for Contract Battle »
A Nurse’s Story: My True Cost of the Pandemic »
Labor Must Rise Against Vaccine Apartheid »