With Contracts Expired at AT&T, Communications Workers Strive for Unity 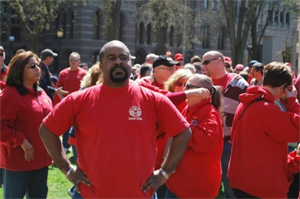 AT&T is proving to be just as difficult as Verizon for the Communications Workers, spurring the union to forge unity across regions and between AT&T and Verizon workers. Here, New York Verizon workers traveled to Connecticut to rally with AT&T workers. Photo: CWA Local 1101.

Here we are again, at the table with AT&T to bargain a contract just 18 months since the last time we finished negotiations. Once again the company is proving to be difficult to deal with.

Again AT&T is looking for serious givebacks. It is trying to take away everything that the Communications Workers gained the last time—which wasn’t much to begin with.

Taking a page from Verizon, which prompted a 13-day strike on the East Coast last summer over its billions of dollars in concession demands, AT&T is asking for 110,000 CWA members nationwide to pay a bigger share of health care.

It is trying again to undo work rules and undermine benefits that we now have, such as double time, vacation time, sick time, job security, and pensions. It wants to take away sick time and replace it with vacation time, eliminate vacation carry-over, and put new hires on a shaky 401(k) retirement plan, just to name a few.

Both AT&T and Verizon are making big profits, yet are playing hardball. AT&T just turned in another profitable quarter, making $3.6 billion in the first months of this year. The company seems to find it inconceivable to share the wealth with the people who make the profits for it.

Like Verizon, AT&T is banking on the idea that big changes in the telecommunications industry will frighten the union into surrendering.

Trying to acquire the spectrum that will allow it to fuel data-heavy gadgets, AT&T attempted to acquire T-Mobile in a buyout last year.

CWA had supported the move, calling on members to contact their representatives to back the deal. At the same time the union moved aggressively to organize T-Mobile workers, knowing full well that the only defense against the attritions and involuntary transfers that would accompany a deal would be a strong union.

Local 1298 helped unionize 16 T-Mobile techs in Connecticut, the only ones in the country that have won a union so far.

Ultimately the merger deal fell through as the Justice Department decided AT&T would be too large and anti-competitive, which would hurt consumers. AT&T had to pay T-Mobile $3 billion and turn over $1 billion in spectrum as a result of the deal falling apart. As a reward T-Mobile is not negotiating fairly for the 16 techs in Local 1298.

AT&T then turned to its workers, claiming it needs to take away benefits because the company is losing access lines and customers, and because the wireline side of the business is not growing.

Yet AT&T’s own quarterly report shows a growth in wireline for the last seven consecutive quarters and a continued reliance on wireline data. And the company never mentions that wireless, DSL, and the bundled television-voice U-Verse service run on the wireline network, not by magic as AT&T would have the customer and shareholder think.

Of course, these are the areas of the business that management is proud to say are growing.

During 2009 negotiations, CWA Local 1298 was the lone holdout in the nation.

CWA divides the AT&T membership into eight regional districts, and the other seven districts fell early on and did not stick together as planned. That left Local 1298 the last standing.

With 4,000 members in Connecticut, we are the smallest of all the districts and did not have much bargaining power. A strike by ourselves would have been fatal.

So we made AT&T miserable by attacking its brand, attending and picketing everything that AT&T sponsored, from the Pilot Pen Tennis Tournament to American Idol tryouts. We picketed college basketball, shows, and other sporting events.

We had pickets at every location daily and mobilized members to wear T-shirts saying they were “prisoners” of AT&T—which drove managers nuts. Several members were suspended and we successfully defended their right to protest on the job. We rented billboards and hired airplanes to pull banners saying “AT&T= corporate greed.” We also put AT&T apparel on clotheslines in front of locations, pointing out their attacks on workers.

We drove them crazy and were branded hard to deal with. We held out for 500 days and received a better contract than all the other districts because of a strong membership that participated actively in mobilization.

But even that contract was substandard. Mostly, Local 1298 just retained what we had and made a few minor improvements in work rules for the premise techs, who install the bundled services at customers’ homes. We went backward on health care.

This time all the districts have made a pact to stick together. They have formed the Committee of Eight, which joins all bargaining teams nationwide. Each has made a commitment to share what is being passed at each table and to not sign off on anything until all the other districts meet and discuss what is going on at each respective table.

We have all agreed not to sign if others are not making progress.

Everyone is doing local and national mobilization activities, and going after the AT&T brand, which is the only thing besides profits that management cares about.

There is also talk of East Coast CWA districts getting together and fighting AT&T and Verizon together. We have the same issues with each company, offering an opportunity for joint mobilization activities to try and jump-start both companies to bargain fairly.

The moment may be ripe for a battle that underscores the need for good union jobs across the telecommunications industry. In Connecticut, Local 1298 has promised members we will lead this fight for the very existence of the 99 percent.

Charles Borchert is a business agent in CWA Local 1298.

Related
Employers Are Using the Crisis to Push Concessions They Don't Need »
New Jersey Welfare Workers Sound the Alarm on Safety »
Communications Workers Fight Telecom Giant for MLK Day Off »
A Common Defense: Mobilizing Veterans in Labor to Beat Trump and the GOP »
Turn the Tables: Demand Concessions from Your Employer »