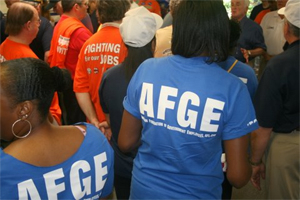 The latest example of the strange disconnect between what union leaders expect from political allies and what they actually get comes from federal-worker unions. Democrats just forced federal workers to take a $15 billion pension hit. Photo: Joyce Putnam.

It’s a strange disconnect: what union leaders expect from their political allies and what they actually get. The latest example comes from the largest federal workers union and arguably the one that relies most on congressional lobbying: the American Federation of Government Employees.

Newly hired federal employees, ironically including Social Security workers—represented by AFGE—who administer the most efficient and trusted government program in our history, will see their pension contribution tripled.

Another bill now under consideration would force federal workers to contribute 1.5 percent more to their pensions and reduce benefit formulas for new hires. A coalition of federal and postal unions said new workers would receive 41 percent less when they retire. (A “new hire” is any worker with less than five years’ seniority.)

The pension hit is estimated to cost federal workers $15 billion. It comes on top of $60 billion of givebacks from two straight years of pay freezes for the nation’s 2 million federal employees.

Such treatment of public workers is what Democrats say they stand against in Wisconsin, New Jersey, and Ohio, where Republican governors attacked bargaining rights. But at the federal level the Democrats attack, demanding an “equality of sacrifice” that paints public workers—not corporate tax cheats—as the problem.

There Is No Alternative

Top union officials virtually across the board are rising once again to remind their ranks that only the Democrats can be relied upon, and that there is no alternative to funding their campaigns and turning out to vote for them.

The Wall Street Journal reports that union PAC contributions are up 15 percent from 2008. They’ve amassed $135 million since the 2010 races. The AFL-CIO political director assured Democrats who might remember labor’s off-year talk of “political independence” that the party will get “more value out of what we’re doing.”

Why can Democrats get away with it? One reason comes back to the nature of most public sector unions. Federal workers can be unionized only in “open shops,” where workers choose whether or not to join, but must be represented by the union. This makes federal worker locals particularly sensitive to the “what have you done for me lately?” question.

A service-oriented culture has developed, and the tough work of building rank-and-file participation falls lower on the list of priorities. In a union that relies almost exclusively on political friends who happen to be members’ ultimate bosses as well, mobilizing the ranks is often seen as a luxury. PAC money for friendly candidates is considered the best investment of resources.

This long-reliable pact among workers, union officials, and legislative bosses has been considered a winning formula all around. Until recently.

During the Obama administration, and especially during its first two years when Democrats controlled both houses of Congress, the alliance between unions and their political patrons began to wither. The Employee Free Choice Act, the law that would have eased union organizing drives, was shelved. When the administration bailed out the auto companies, it dictated wage cuts, plant closings, and tens of thousands of layoffs, and stripped workers’ right to strike. The health care bill attacked union-negotiated plans. A green-job transformation for the economy stalled.

Then Obama announced in December 2010 that salaries for federal workers, already low compared to those of private-sector workers with similar education and longevity, would be frozen for years into the future, as part of sharing the sacrifice in austere times. Federal union leaders were patriotic about it.

But members started asking a bit more loudly, what have you done for us lately? Federal workers, always underpaid but until now more or less satisfied with their decent health coverage and pensions, were beginning to feel the squeeze.

And now, in an election year, federal workers have been told to sacrifice once again. The myth of approximate parity with compensation in the private sector for equivalent work was quickly losing its credibility. With no apologies, the Democratic-controlled Senate and White House swiftly enacted the pay and pension cuts.

Email to the Rescue

AFGE, and the other federal worker unions, activated the member mobilization tools they rely on—email blasts asking workers to contact their representatives and remind them of their loyal labor voting base.

Union officials were righteously indignant about Congress’s hypocrisy: giving senators and representatives the opportunity to retire early while forcing a threefold increase in what new federal employees pay toward their pensions. But the indignation took on an unexplainable twist.

The “hypocrites” label was applied only to “right-wing leaders in the House.” Democrats in the Senate and White House were off the hook.

Joseph Ponisciak, vice president of a large local of Social Security workers in Philadelphia, wonders why. “We keep hearing that we have no choice,” he said. “That the Republicans are obviously worse, and only the Democrats will keep us safe. But when the Democrats act just like Republicans no one seems to notice.”

Ponisciak says federal workers are at least as vulnerable to union-busting as workers anywhere in the private sector. Privatization is the big fear, but more insidious is the fact that workers can opt out of the union if they don’t see results.

“It’s just too hard, I’m told, to organize the ranks and expect activism beyond a get-out-the-vote effort,” he said. “You get the democracy you pay for. Without organized political pressure from the ranks below, the question remains, what have our top officials and their political friends done for us lately?”

Warren Davis is retired executive vice president of AFGE Local 2006, representing Social Security workers in Philadelphia. He and Ponisciak, now EVP, organized a five-year effort based in the rank and file that defeated the national Total Quality Management (team concept) drive at the Social Security Administration.

Related
Review: How Workers Can Safeguard Pensions »
Open Bargaining Brings the Power of Members to the Table in Berkeley »
New Jersey Welfare Workers Sound the Alarm on Safety »
New York City Retirees Fight to Defend Their Medicare Benefits »
Get Fossil Fuels Out of Our Pension, Say Environmental Protection Workers »