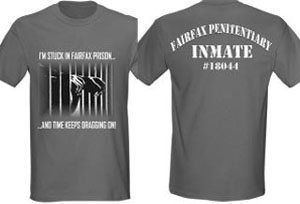 Workers at General Motors’ Fairfax plant in Kansas City, Kansas, have won the right to wear T-shirts that call their factory a "penitentiary." GM backed down and reversed the suspensions of workers disciplined for wearing the shirts.

Workers at General Motors’ Fairfax plant in Kansas City, Kansas, have won the right to call themselves prisoners.

GM suspended around eight workers this week and last for wearing T-shirts that read “Fairfax Penitentiary Inmate.” The shirts protest increasingly strict conditions in the factory.

Yesterday, after the controversy aired on the evening news as far away as St. Louis, the company backed down and asked suspended workers to return to work at full pay.

Management banned fans and radios throughout the plant. In her section, where cars are driven off the line, a ventilating fan was removed and not replaced. And the company has put in stricter security measures, with workers unable to leave the plant on breaks. “You can’t even have a pizza delivered,” McClure said.

Marie Hesser was suspended because she sold the shirts—though the company routinely allows sales of Girl Scout cookies and the like. She said management told her the shirts were “offensive,” though the company store has carried T-shirts, with the GM and United Auto Workers logos, that say, “We do it all night long at Fairfax.”

Hesser was preparing to proudly wear her shirt on the second shift today.

McClure said workers called on the carpet were given the option of removing the shirt, turning it inside out, or being suspended. They refused. She said she’d heard that union reps put on the shirt and dared management to kick them out. She told management, “I’m standing up for what I think is right.”

Workers called a meeting on Saturday to discuss what to do, and were visited by KCTV.

For his part, the president of the UAW Local 31, George Ruiz, was perturbed by the flap. He would prefer the media cover the local’s plan to donate 400 bikes to needy children, he said.

Jane Slaughter is a former editor of Labor Notes and co-author of Secrets of a Successful Organizer.
Related
Mexican Auto Workers to Choose New Union in Landmark Vote »
Auto Workers Win Direct Democracy in Referendum »
'We'll Never Be in This Position Again': Striking Deere Workers Hold Out for Better Deal »
Academic Workers Join Push for One Member, One Vote in the UAW »
'Let's Put a Wrench in Things Now': Deere Workers Strike as Company Rakes in Record Profits »

Hey Holly McClure this union nurse loves your spunk. Keep up the fight.

The comment by the president of the local was seriously to ignore worker's rights and focus on bicycles?!?!? This has rendered me speechless, no wonder working conditions are deteriorating.

This just shows what solidarity can accomplish. We won this battle, with only 3 elected reps (committeepersons and alternates) taking a stand and being thrown out. Hopefully, the rest of the local leadership will follow thier example, and start representing this membership. President Ruiz, it may already be too late for you.