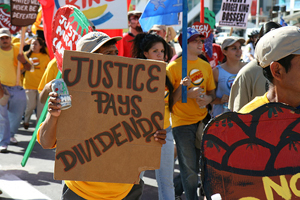 The farmworker group Coalition of Immokalee Workers announced October 13 it has reached a landmark deal with a Florida tomato grower to govern conditions in the fields. Photo: Fritz Myer.

The farmworker group Coalition of Immokalee Workers announced today it has reached a landmark deal with a Florida tomato grower to govern conditions in the fields.

The agreement greatly expands the proportion of Florida’s $500 million tomato crop that will be produced under CIW’s code of conduct. That code includes a grievance-like complaint resolution system, a participatory health and safety program, and access for CIW to the fields for direct worker-to-worker contact.

The group’s aim is to keep tomato pickers themselves at the center of the battle to improve the notoriously poor conditions in agriculture. CIW has helped uncover eight cases of involuntary servitude among Florida farmworkers over the last 13 years that have resulted in prosecutions of farm bosses and labor contractors.

Today’s deal with Pacific Tomato Growers, a privately held company reported to sell $151.6 million worth of produce a year, also brings in third-party monitors to ensure that the penny-per-pound wage increase CIW has won over the last five years actually reaches farmworkers. Big purchasers of tomatoes—McDonald’s, Burger King, Taco Bell, three big campus food service companies, and Whole Foods—have all agreed to pay the penny increase, but the Florida tomato growers’ trade association has refused to pass through the gains to workers.

A smaller supplier, East Coast Growers, broke ranks last year and agreed to participate, but the CIW’s new deal with Pacific represents a significant fracturing among big growers. Meanwhile, the tomato-purchasing corporations such as Taco Bell have been holding the one-cent increase in escrow. When fully in place, the wage boost will raise farmworkers’ pay from 45 to 77 cents per bucket, increasing their $10,000 average annual pay by thousands of dollars.

By securing commitments from both the top and the bottom of the supply chain, the CIW says, a worker-driven approach to tackling deep-seated problems in agricultural work will take root.

“It affords the workers a voice in the fields,” said CIW staffer Julia Perkins, “and it takes the relationship with growers to the next step.”

That relationship isn’t a union—the CIW still conceives of its work as education, investigation, and agitation. But some of the mechanisms being deployed, like the complaints-resolution process that accesses outside arbitrators, take a page from the formal labor movement.

Pacific came to the CIW, Perkins said, perhaps sensing that it could snap up market share from companies that want to purchase tomatoes harvested under better conditions. The arrangement didn’t involve a quid pro quo, Perkins said, adding that the Fair Food Campaign’s demands remain the same: codes of conduct that farmworkers are involved in enforcing, transparency to ensure the rules are followed, and, of course, the pay increase, for workers whose last raise on many farms may have been three decades ago.

A crucial element of CIW’s strategy is still to win commitments to pay the penny from the heavyweights in the food supply chain: grocery stores. CIW launched new pressure campaigns against Publix, Trader Joe’s, Giant, Stop&Shop, and Kroger yesterday—and now, with a big grower on board, it looks ready to take the giant steps Florida tomato pickers have been struggling decades to achieve.

“We are not today claiming that we have achieved the changes sought by the Campaign for Fair Food,” said CIW leader Lucas Benitez in a statement. “Rather, we are announcing that we have forged a plan of action that gives us a realistic chance to bring about those changes.”

Mischa Gaus was the editor of Labor Notes from 2008 to 2012.mischagaus@gmail.com
Related
Workers at Big South Florida Hotel Boost Minimum Pay to $20, Retain Union Jobs »
Steward's Corner: What Your Boss Doesn't Want You to Know, and Where to Find It »
Pandemic Spurs Nashville Restaurant Workers to Organize »
Poultry Workers and Allies Organize in the Wake of Anti-Immigrant Raids »
Tennessee Janitors Convince Target To Drop Dirty Cleaning Contractor »