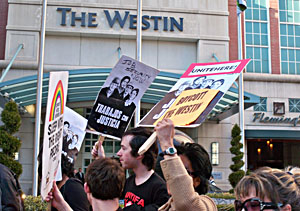 The Westin boycott is the latest attempt to fight off a wave of attacks from the hotel's managing Procaccianti Group: threats to replace workers with subcontracted labor and retaliatory firings of worker activists. The last straw came in March, when the Westin broke off talks, and imposed deep cuts to wages and benefits.

After six months of rocky contract talks, hotel workers have launched a boycott of the Westin hotel in downtown Providence to protest the company’s deep unilateral wage and benefit cuts, as well as work speedups. The rain-or-shine pickets, on for two weeks now, got going right as the hotel hosted an influx of guests for the NCAA basketball tournament in late March—a big tourist boon for the city.

While hotel workers have teamed up with Rhode Island Jobs with Justice and area unions, the boycott call is reaching out-of-towners too. Dozens of members of IATSE, AFTRA, and Teamsters—from the cast and crew filming a pilot for ABC—moved out of the Westin last week.

The boycott is the latest attempt to fight off a wave of attacks from the Westin's managing Procaccianti Group: threats to replace workers with subcontracted labor (a la the "Hyatt 100" in Boston) and retaliatory firings of worker activists. The last straw came in March when the Westin broke off talks, slashed wages by 20 percent, tripled (and in some plans quadrulpled) health care premiums, while cutting sick days and vacation.

The trouble started as soon as the contract talks opened in October. Westin’s subcontracting threats came right on the heels of the fall firings of 100 Hyatt workers at three non-union hotels in Boston. As the “Hyatt 100” launched a boycott in Beantown and joined a citywide “March for Jobs” that brought 1,000 people through the streets of downtown Boston, Providence activists resolved to keep the subcontracting scourge from spreading.

They rallied City Council support for a "worker retention ordinance." The law requires hotels connected to the publicly-subsidized downtown Convention Center—including the Westin—to retain current employees and pay them prevailing wages and benefits for six months if the company subcontracts work or changes hands completely.

Despite the workers’ victory, the Westin went on the offensive, firing three workers in November for joining informational pickets outside the hotel on their work breaks. The union brought a successful complaint to the NLRB on behalf of the workers, and four months later celebrated their reinstatement—marching behind the three on their first day back to work.

The community is still behind the workers after they voted, 138 to 2, to call a boycott and consider a strike. A large crowd gathered outside the Westin to launch the latest phase of the contract campaign. The news of the company’s deep cuts brought out city councilmen, CLC officials, and leaders from AFSCME and the building trades—who all vowed to keep their members out of the Westin until management rescinds the cuts and bargained in good faith.

After a series of rousing speeches from hotel workers and supporters, City Councilman John Lombardi threw his support behind the boycott—even if it meant foregoing his regular trips to the hotel gym, where he’s a member.

Francis Engler, organizer with UNITE HERE Local 217, responded, to cheers: "You can get some exercise walking with us, councilman!"

Westin Hotel workers call for a boycott of the Providence Westin Hotel from RIFuture.org on Vimeo.