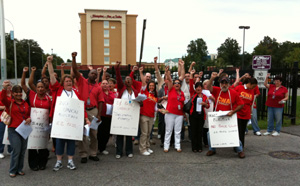 “You’re the ringleader—the main problem.” That’s what Frank Buonvicino said managers told him as they fired him Monday.

Buonvicino and 13 other union supporters at a Staten Island call center that handles complaints and inquiries for the E-Z Pass toll system were called in one by one and fired.

All 14 fired workers handled the “tags,” the transponders returned by customers. Management said they didn’t need them anymore, while at the same time they’ve hired 50 temps to come in and take over the work. (The replacements temp firm? PRWT, "People Really Working Together.")

On the Friday before they were fired, all these workers had sent a message to management by standing up in unison for 60 seconds while continuing to work.

"They're trying to put us on the cross because we're union activists," Buonvicino said.

The 300 workers at the call center had voted in the Communications Workers last May—but they’re struggling to get a contract. Managers haven’t met with them since September. Their company was absorbed by Xerox last month, which is now refusing to bargain, too.

Workers started organizing in 2008 after they grew tired of being yelled at like children, demeaned, and denied raises if they weren’t management’s favorites. The breaking point for many workers was a piece-rate system that’s sped work up and downgraded pay.

CWA is asking for your help. Protest the firings by emailing Xerox CEO Ursula Burns at ursula [dot] burns [at] xerox [dot] com.