Put Tax on ‘Cadillac’ Health Plans Up on Blocks 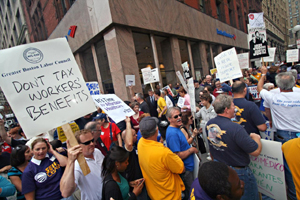 At this September rally in Boston, union members protested a proposed 40 percent tax on health care benefits. Recent research studies argue such a tax will make employers cut benefits, make workers pay more or forgo health care, and put much of the savings back in management's pocket. Photo: Aaron Donovan.

The theory behind the so-called “Cadillac tax” on high-premium health plans is that people like Betty Diamond have too much health insurance, which causes them to get more medical care than they need.

And if people like Diamond had thinner health care benefits, the theory continues, their bosses would pass the savings along in nice wage increases.

But after serving on two bargaining committees—and surviving two cancers—Diamond, a technician at an AT&T data center in Miami, says the theory is off base.

The health reform bill which passed the Senate in December would impose a 40 percent excise tax on health insurance plans with premiums above $23,000 a year for families and $8,500 for individuals. The tax would hit insurers and big self-insured employers—who would force them onto workers.

It's not just Diamond's life experience that pokes holes in the “Cadillac tax” argument. A series of research studies also shows that the tax is based on faulty assumptions.

There are three key ideas put forward in support of the benefits tax—the tax will hit only lavish plans, it will help bring down health costs, and employers will pass the cost savings directly into wages.

The myth of rich-benefit “Cadillac” plans is the first flaw in the theory. By 2019 the benefits tax would hit one-fifth of households making between $50,000 and $75,000 a year, according to figures from the Congressional Joint Committee on Taxation. The tax would pose a heavy burden on working families.

Studies by the Economic Policy Institute and for the policy journal Health Affairs show that plans with big premiums don't necessarily have big benefits.

Rather, high premiums go with an older workforce (like Diamond, a 40-year employee), because older people use more medical services. Smaller employers are also more likely to be affected; they pay, on average, 18 percent more than large employers for the same benefits, according to the White House Council of Economic Advisers. And health costs also tend to be higher for women, so work groups that have large female representation—such as teachers, nurses and telephone call center employees—are more likely to be taxed.

Diamond is also more likely to be hit by the tax because of where she lives. An average family policy in Miami costs more than $20,000 a year—meaning the average policy comes close to the “Cadillac” definition in the Senate's legislation—while a policy with the same benefits in Phoenix costs less than $15,000, according to the actuarial consulting company Milliman. The difference has nothing to do with “Cadillac” benefits. It’s a function of prices and medical practice styles in the different markets.

Betty Diamond’s coverage, negotiated by the Communications Workers with AT&T, is good, but hardly lavish. She had to pay hundreds of dollars out of pocket a few years ago when she had cancer surgery. And she pays nearly $1,000 a year out of pocket for prescriptions; her cancer exams also turned up a hereditary problem with her lungs, which requires her to take medicine to avoid dangerous blood clots. She goes for regular checkups to her oncologist to make sure the cancer is still in check, with a co-payment that's going up this year, from $20 to 10 percent of the charges, under the new CWA contract.

Second, supporters say the tax would hold down health costs by pushing employers into less expensive plans. If there were cheaper plans out there that offered equivalent benefits, opponents counter, employers would already be in them. Instead, the only way employers can make plans less expensive is by cutting benefits—and that's what nearly two-thirds of employers plan to do, according to a survey by Mercer, a benefits consultant. And that means higher co-pays and deductibles.

Ah, say supporters of the tax, if consumers face higher out-of-pocket costs, they’ll cut out unnecessary care and shop for better prices. Studies show that consumers do use less care when they have to pay more, but they cut back on necessary as well as unnecessary treatments.

That can lead to higher costs down the road. For example, one study tracking higher co-pays for office visits and prescriptions found that workers did cut back—but that savings were offset by higher hospital admissions, especially for older workers and those with chronic health problems.

Even with higher co-pays, Diamond says that, having survived cancer twice, she's not about to skip an oncology checkup, never mind pass on needed surgery. Nor should we want a health policy that will force her to.

"Personally, I don't go to the doctor unless I have to," she says. But, mindful of her life-threatening medical conditions, "I tend to do what the doctor tells me."

Third, supporters of the benefits tax also say that people like Diamond don't have to worry about a tax on benefits. Sure, the employers would trim benefits but wages, they say, would go up as health costs came down.

A report from the Economic Policy Institute tracking health costs and wage growth over the past 20 years concluded that isn't so. While there’s some connection between wages and benefit costs, employers are more likely to keep any savings for themselves rather than pass them on to workers, especially in an economy with high unemployment.

Betty Diamond didn’t need a study to tell her that. She’s served on two CWA bargaining committees where her employer fought hard to keep health costs down. And neither time did management offer to pass the savings back to the workers in extra pay hikes. “Absolutely not. Please,” Diamond says—when she stops laughing at the idea.

And while this isn’t a great time for unions in bargaining, at least organized workers have some leverage. “They never give you anything,” Betty Diamond says. “You only get what the union bargains for. And they wouldn't give it to you if the union wasn't there.”

Bill Salganik is a member of CWA Local 32035, the Washington-Baltimore Newspaper Guild, and does writing and research for a CWA Web site, www.healthcarevoices.org.