AFL-CIO Convention: Having Some Fun with Capitalism 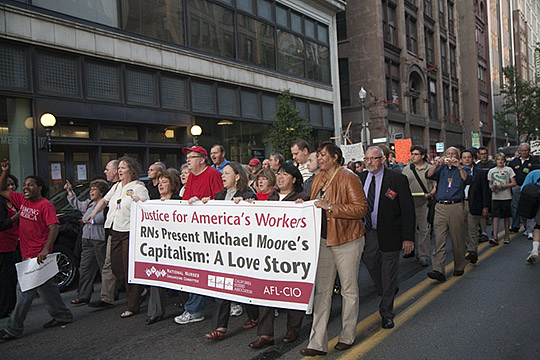 The premiere of Michael Moore's new film "Capitalism: A Love Story" followed a noisy march from the AFL-CIO convention to a theater down the street. Photo: Jim West | jimwestphoto.com

Michael Moore’s new film “Capitalism: A Love Story” premiered to a rowdy—and wholly appreciative—labor audience at the AFL-CIO convention. The event, following a noisy march from the convention center to a theater down the street, was organized by the California Nurses Association and the Labor Campaign for Single Payer among others. It offered a refreshing contrast to an otherwise staid and scripted convention.

Moore, who introduced the film and took questions afterward, proclaims at the end of the film that he can’t keep living in a country that allows its citizens to be mistreated so badly but, he says, “I’m not leaving.” His call to replace capitalism with democracy was met with a burst of applause—one of many that erupted when workers scored one for their side against the modern-day robber barons.

Lots of similar and less-entertaining arguments have been made before, but it’s a relief to see this spade called a spade so thoroughly. Much better is that this denunciation comes in a format that will be seen on 1,000 screens nationwide in its October 2 release (if, as Moore fears, queasy Hollywood limousine liberals don’t stand in the way of its distribution).

Among the revelations in the film:

Moore has no single prescription for the evils of capitalism, which are denounced by a varied cast of characters including Catholic priests, foreclosed-upon homeowners, frustrated bank regulators, and former hit men for financial giants. He shows detailed footage of the Republic Windows and Doors factory occupation of December 2008, two methodically democratic and prosperous worker cooperatives in Wisconsin and California, and a foreclosure in Miami stymied by determined neighbors and the Miami Workers Center.

A jarring note was Moore’s faith in President Obama to “take the side of working people instead of Wall Street” despite his appointment of Larry Summers, Timothy Geithner, and Robert Rubin as his top economic advisers—the same architects of the Wall Street bailout who are thoroughly lambasted in the film. In this (only), Moore echoed a theme of the AFL-CIO convention, which was to pretend Obama’s recent back-pedaling on health care and the Employee Free Choice Act has not been happening.

Jacques Loveall, a UFCW top official in Northern California, spoke from the floor after the film to inform Moore that his grandmother had helped organize the same GM sparkplug factory in Flint, Michigan, that the filmmaker’s father worked in for 33 years. The information was met by rousing cheers from an audience inspired by footage of the sit-down strikes in the ‘30s that birthed the UAW—and their return to the U.S. labor movement in Chicago last December. They were left unaware of the private plane that Loveall’s local owns, however, or the $263,385 salary that sustained him last year.

Reactions to the movie from the labor audience were enthusiastic. Carolyn Hietamaki, a director of the United American Nurses in Marquette, Michigan, said she loved “Capitalism” for its “honesty.”

“Capitalism is basically why we’re in the union movement,” Hietamaki said. “We take on capitalism all the time.”

One Vermont delegate, looking forward to organizing screenings in his union hall, said to another, “We can have some fun with this.”

Barry Kushnir, a New Jersey Turnpike toll collector and secretary-treasurer of the Professional and Technical Engineers (IFPTE) Local 194, said the film made him “want to go out and scream from the top of my lungs—we need a new New Deal.”

The energy from the film screening, he said, is going straight back to the convention floor—where delegates will consider two health care resolutions Wednesday, one of which backs single payer.

Related
Richard Trumka, 1949-2021 »
Here's How to Join Labor's Anti-Coup Network »
How to Fight a Coup: The Role of the Workers’ Movement »
Review: The Grapes of Wrath »
Movie Review: Car Wash »