Nabisco Workers Hope Strike Inspires Others: 'There's More of Us than There Are of Them' 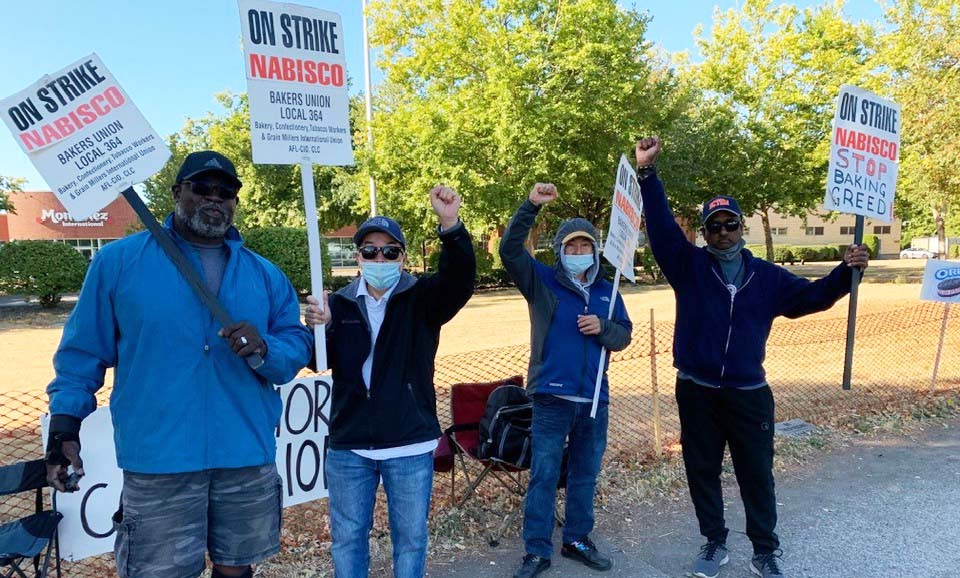 “We were sick and tired of this because every contract we got, the company was trying to take a little piece of what we had,” said Shri Mudaliar, a member of BCTGM Local 364 at Nabisco's bakery in Portland, Oregon. Photo: Jamie Partridge

A month-long strike by Nabisco workers beat back the snackmaker’s bid to introduce a two-tier health care plan and switch them onto 12-hour shifts. Employer contributions to workers’ 401(k) plans will be doubled.

One of the biggest issues in the strike was the company’s effort to do away with premium pay for weekend shifts and work after eight hours. The company wanted to put all workers on an Alternative Work Schedule consisting of 12-hour days, paid at straight time.

“The big issue for me is I just can’t do the 12 hours,” said April Flowers-Lewis, who’s been at the Chicago plant for 27 years. “Because the 12 hours will be 16 hours. And then if you do that and you’re not paying us for our time-and-a-half and double time, that’s like $20,000 from everybody.”

Workers are currently scheduled for eight-hour shifts Monday through Friday. They’re often forced to work on the weekends, but get time-and-a-half on Saturday and double-time on Sunday.

“Our kids are out of school on the weekends,” said Mike Burlingham, who works in pest control at the Portland, Oregon, bakery. “Get-togethers with families, weddings, funerals—the weekend is a premium time personally. So if the company is cutting into that personal time, the premium pay is the compensation for that. That’s something you don’t want to lose.”

“You don’t have a lot of time with your family,” said Corey Waddy, who works in the packing department at the Richmond facility. “If I’m gonna work those hours I wanna be compensated for it financially. You can keep the pat on the back because at the end of the day, it’s about the money.”

The agreement maintains the eight-hour shift for most employees. But the company did win the ability to schedule new crews to work three 12-hour shifts on the weekends without paying overtime. Current workers won’t be forced to switch to these shifts, and will still be paid premiums for weekend work and overtime after eight hours.

The strike started at the company’s bakery in Portland, Oregon, on August 10. By August 18, it had spread to Nabisco’s two other U.S. bakeries in Richmond, Virginia, and Chicago as well as distribution centers in Aurora, Colorado, and Norcross, Georgia. Workers make Oreos, Chips Ahoy, Ritz crackers, and Saltines, among other products.

The strike was a long time in the making. Bakery Workers (BCTGM) has criticized Mondelez for shifting production to two low-wage plants in Monterrey, Mexico. Two big Nabisco plants closed earlier this year, in Fair Lawn, New Jersey, and Atlanta. The company contracts some production with non-union baker Hearthside Foods in the U.S.; BCTGM lost an election to represent the 1,300 workers at Hearthside’s McComb, Ohio, bakery last December.

In the previous round of negotiations in 2016, the union and company never reached an agreement on a new contract. In 2018, Mondelez declared impasse and implemented the contract, withdrawing from the pension.

“We were sick and tired of this because every contract we got, the company was trying to take a little piece of what we had,” said Shri Mudaliar, a machine operator at the Portland plant.

During the strike, the company deployed the typical strikebreaking tactics: hiring a specialist security firm to escort scabs and intimidate strikers, and cutting off workers’ health insurance. “They cut off our health insurance in the middle of a global pandemic,” said Waddy. “To me that was the lowest blow.”

Luckily, the federal government picked up the tab. Under the American Rescue Plan Act passed earlier this year, the government covered COBRA premiums for striking workers. That provision expired on September 30.

A BATTLE IN PORTLAND

The strike generated significant community support. But it was most pronounced in Portland. The local chapters of Jobs with Justice and the Democratic Socialists of America (DSA) organized weekly rallies every Saturday, which drew hundreds of supporters. “Boycott brigades” headed out afterwards to leaflet and plaster supermarkets with stickers reading “Don’t Buy Nabisco! Respect the Strike!” Members of the Portland Thorns, the women’s professional soccer team, joined the picket line; the Thorns are in the middle of their own first contract battle along with other members of the National Women’s Soccer League Players Association.

Supporters paid a visit in the middle of the night to a local Marriott to demand it stop housing scabs, honking horns and setting off car alarms to drive their point home. Portland activists, battle-tested in street fights against far-right groups, blocked vans full of scabs from getting to or leaving the plant. A union engineer reversed a train carrying ingredients to the plant after supporters stood on the tracks with picket signs. Supporters raised $91,000 in an online strike fund to supplement the $105-a-week strike pay from the union.

Portland workers were the first to vote on a deal. Many of them turned it down because of the new 12-hour weekend shifts. “A lot of folks saw this as a stepping stone toward an alternative workweek, and they didn’t want to start allowing that kind of language in our contract,” said Burlingham, who is vice president of Local 364. A group of them circulated a video encouraging workers elsewhere to vote no.

‘MORE OF US THAN THERE ARE OF THEM’

But in the end, the contract passed overwhelmingly—590 to 201—with many workers feeling they beat back the company’s main demands.

Regardless of how they voted on the deal, workers were inspired by the support they got. “Going into the strike, I thought that this would probably just be our strike,” said Mudaliar. “But there was so much support from all these local unions—nurses, Carpenters, Teamsters, DSA, Jobs with Justice, all the local community people.” Mudaliar said one grocery worker drove six hours from Utah to join the picket line. “She just wanted to feel it, to be a part of it.”

Mudaliar himself said he planned on joining a late September rally by the Oregon Nurses Association.

“I learned that when you’re walking out because of bad working conditions, because your employer is bullying you and won’t negotiate a fair contract, that people genuinely care about that,” said Burlingham. “There’s more of us than there are of them.”

Workers are hopeful that their struggle will inspire others. “I think you’re starting to see a shift in this country, with all the different strikes,” said Waddy, who’s been at the Richmond plant for five years. “A lot of industries are gonna start unionizing—Starbucks, Amazon, Walmart.”

The four-year deal at Nabisco expires in 2025. “I told everybody we better get ready, because I believe in four years we’re gonna be right back where we started,” said Flowers-Lewis.

Dan DiMaggio is assistant editor of Labor Notes.dan@labornotes.org
Related
St. Louis Boeing Plant Workers to Strike »
'We'll Never Be in This Position Again': Striking Deere Workers Hold Out for Better Deal »
‘It Feels Like We Started a Movement’: Despite Mixed Results in Frito-Lay Strike, Workers Proud They Stood Up »
'Let's Put a Wrench in Things Now': Deere Workers Strike as Company Rakes in Record Profits »
Countdown to a Strike Tonight at John Deere »