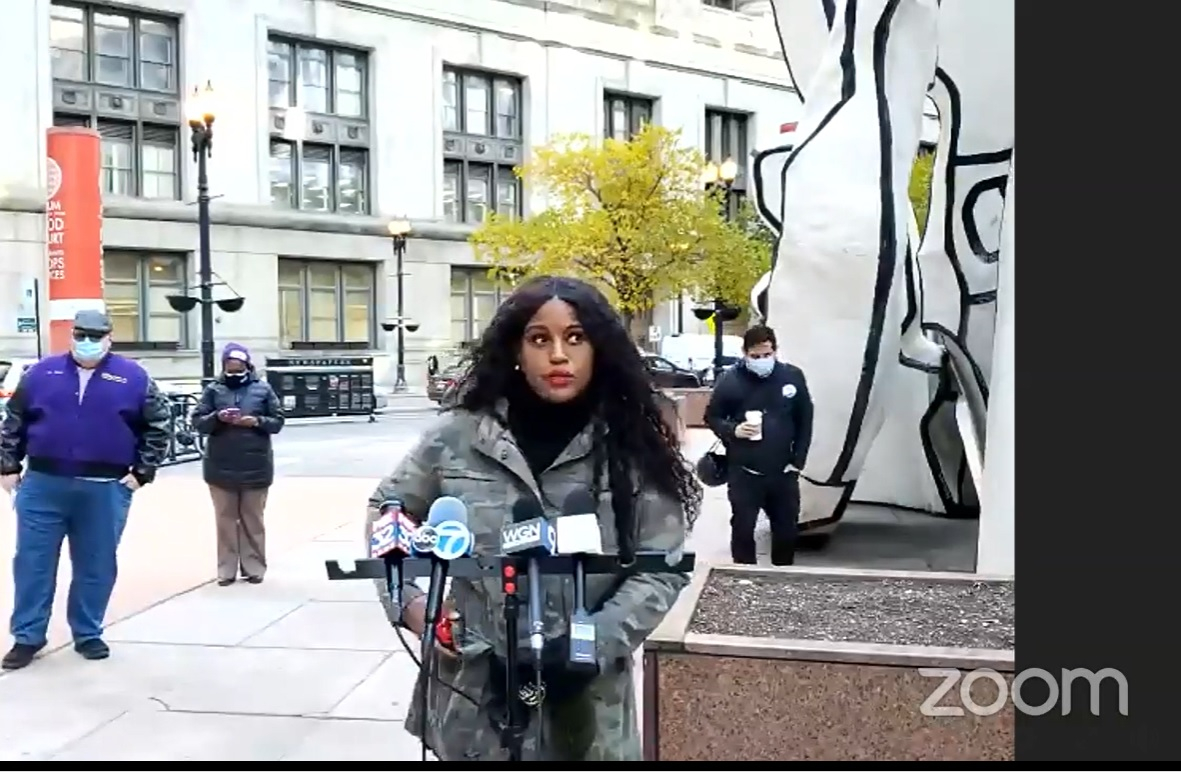 In Chicago today, unions including the Chicago Teachers, the United Electrical Workers, SEIU Healthcare Illinois, SEIU Local 73, and Government Employees Local 704 announced that they are prepared to take part in mass protests, including a general strike, to defend democratic rights and the peaceful transition of power. Photo: screenshot from CTU video broadcast

It’s election eve and anxious voters are wondering not only who will receive the most votes, but also: Will those votes be counted? Will the people or the Supreme Court select the next president? Will Trump supporters move beyond intimidation to violence to suppress the vote?

Will we face a president who refuses to accept the results of the vote? Will we have to defend against a coup?

Labor Action to Defend Democracy (LADD) is a grassroots group is preparing for these possibilities. It started with a small group of labor activists who realized that they couldn’t wait for someone else to protect the vote. They drew up lists, made phone calls, and brought together a larger network of union leaders and members.

There's a model letter to elected officials to protect the right to demonstrate and demand that police not interfere with peaceful protests. Another model letter from the Chicago coalition is available here.

Many cities are planning for mobilizations on November 4 and 7. Find info on actions near you at protecttheresults.com.

Members of the LADD network will be joined by president of the Georgia AFL-CIO and the special counsel to the national AFL-CIO for a livestream tonight on Facebook at 8 p.m. ET.

The group is circulating a pledge: signers will take to the streets and support workplace actions, including strikes, if a coup is attempted. The most recent organizing call included more than 100 labor and community leaders from across the country.

Meanwhile others in the labor movement—individuals and organizations—were making their own preparations. When the Seattle Education Association and the Rochester Central Labor Council passed resolutions calling for labor action in the event of a coup, they were acting independently.

But their actions inspired others, from the Massachusetts Teachers Association to the Texas Gulf Coast Area Labor Federation and at least 22 other central labor councils and unions, including the executive council of the Teachers (AFT).

The AFL-CIO executive council passed its own resolution October 19, saying that workers would defend democracy. But given reports that AFL-CIO President Richard Trumka scrapped a planned meeting of labor leaders when the existence of the meeting was leaked, it’s not clear what the leadership intends by that statement.

HOW IT COULD HAPPEN HERE

The passing of a resolution doesn’t guarantee action. For that we need organizing.

For some, the idea of coup seems implausible. That’s why United Teachers Los Angeles called members together in regional meetings to learn what a coup might look like and how the election count might unfold. Using this PowerPoint, UTLA members learned about significant deadlines and decisions on the way to the next president taking office.

This preparation will be especially important when Trump starts insisting that the election is over—and the vote-counting stops—at midnight on November 3. In the confusion that we can expect from Trump, unions need to provide clear information to their members about the process and potential dangers.

LADD is a network, not an organization—providing information and building connections to help unions get ready for coordinated actions. It provides links to other coalitions including protecttheresults.com, which is supporting national events on November 4 at 5 p.m. You can find an event there or create your own and add it to the page.

It also provides the pledge and example resolutions in Spanish.

As the resolutions multiply and more people sign the pledge, LADD is supporting the development of regional groupings that can act together if needed.

In Chicago today, unions including the Chicago Teachers, the United Electrical Workers, SEIU Healthcare Illinois, SEIU Local 73, and Government Employees Local 704 announced that they are prepared to take part in mass protests, including a general strike, to defend democratic rights and the peaceful transition of power.

In Washington state, LADD’s pledge is being used to help educate and inform members through the statewide labor council, which is also assessing local readiness to act, including identifying union halls where people can gather and get information.

For workers not in unions, LADD is sharing information through links to organizations such as the Sunrise Movement, March for Our Lives, and United We Dream. Through the coalition Count On Us, these groups are supporting getting out the vote and preparing for direct action.

The key is that labor needs to show up as labor by preparing to use its strongest leverage—the strike—to demand that every vote must be counted and that the voters must determine the results of the election.

This is an opportunity for a too-often dormant labor movement to realize its power. If we are needed and we respond to the call, every worker who participates will be more ready to take on the struggles ahead, no matter who wins the presidency.

Barbara Madeloni is Education Coordinator at Labor Notes and a former president of the Massachusetts Teachers Association.barbara@labornotes.org
Related
Viewpoint: It’s Time to Tap into Labor’s Fortress of Finance »
Before Your Strike Vote, Consider a Practice Strike Vote »
Seattle Teachers End Week-Long Strike »
Ten Years Ago, Chicago Teachers Gave Us All a Jolt of Hope »
Viewpoint: Two Contrasting Visions of the Labor Movement Were on Display in June »

Sister and Brother officers of regional AFL-CIO and non-affiliated unions:
Several regional councils asked the national AFL-CIO to authorize a general strike to defend fair elections, which was a courageous and historic act. We, the undersigned union officers, ask for a similar authorization for a general strike to demand government stimulus money. Millions of working-class people desperately need $2,000/month during the pandemic to pay their bills and otherwise survive.
Organized Labor is now the only force left to rescue millions of suffering people because Congress is deadlocked for 2 more months while Trump funds mainly Wall Street. We believe it is unconscionable if Labor fails to use our economic leverage to alleviate this suffering.
After 250,000 U.S. COVID deaths and a thousand deaths per day this month and rising, another 100,000 deaths is possible by January. Ten million of us are infected with COVID-19. Workers need stimulus money instead of unsafe jobs.
Voters just defeated a president who failed to help everybody when he had the chance. Now when we have the chance, will we help everybody or will we, like Trump, turn our backs? Remember what built the unions: united we stand – divided we fall. Workers have friends and family members who are out of work and need stimulus money to pay the bills.
Ironically, we need to shut down the economy in order to start the economy. The economy cannot re-start without Federal stimulus money to spend. Organized Labor can enforce this now. Waiting to see if the Senate will be able to break the deadlock on Jan. 9 is gambling with millions of lives. We have the power. Let us use it! Please ask the AFL-CIO to authorize a “General Strike for Stimulus.”
Here is the suffering which can be alleviated by the power of the AFL-CIO:
• We need safe jobs or income now, with a stimulus that helps working people, not billionaires.
• We must end racism & police terror and establish community control of police - now!
• Everyone should have affordable health care during the pandemic and after.
• We must prohibit evictions, foreclosures, and utility shut offs during the pandemic.
• A guarantee of safe working conditions plus hazard pay for workers during the pandemic.
• A tax system that makes the rich pay their fair share, while cutting taxes for working people.
Sincerely,
Kit Andrews, retired, former President, Barre Chapter, Vermont State Employees Association (VSEA).
Richard Ochs, retired shop steward, Local #24, Industrial Union of Marine & Shipbuilding Workers of America (IUMSWA) Baltimore MD.
and pensioned member of Graphic Communications International Union (GCIU).
George Vlasits, USWA 3185, Shop Steward and Grievance Committeeman retired.
Montgomery County Educators Association (NEA affiliate), Building Rep, retired.
Sharon Black, former UFCW Local 27 shop steward, Baltimore MD.
Tom Smith shop steward, UE Local 120 and Building Rep, Baltimore Teachers Union, AFT
Thurman Wenzl, staff industrial hygienist, International Chemical Workers Union. Safetyman, International Longshoreman's Assoc. Local 333