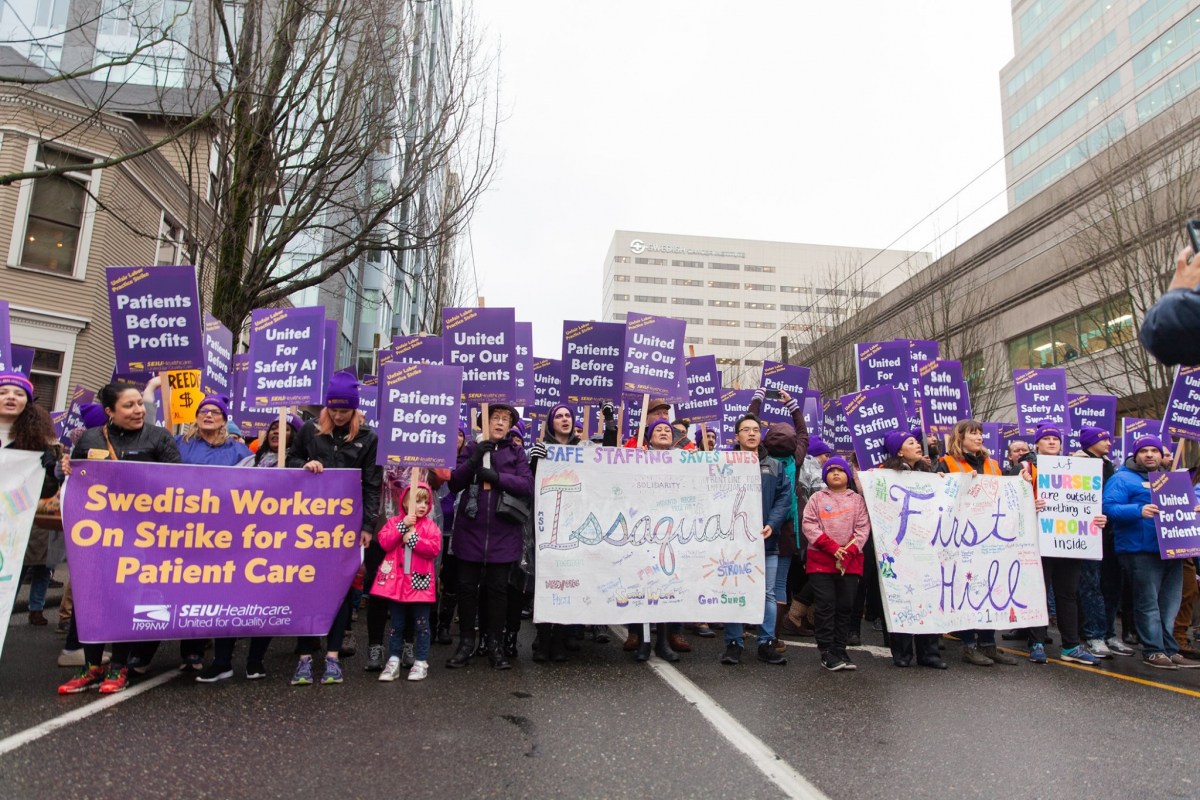 After nine months of fruitless negotiations, 8,000 hospital workers in the Swedish Medical Center chain in Seattle walked out January 28 on a three-day strike.
Photo: SEIU 1199NW.

After nine months of fruitless negotiations, 8,000 hospital workers in the Swedish Medical Center chain in Seattle walked out January 28 on a three-day strike.

The strikers include everyone from nurses and medical assistants to orderlies and janitors. They are represented by SEIU 1199NW.

The strike was over unfair labor practices. The union alleges that Swedish management has fired workers for union activity and has failed to engage in good-faith bargaining.

Swedish is part of a bigger corporation, Providence Health & Services, one of the West Coast’s largest and richest health care systems. Since Providence is such a major care player, the success or failure of this campaign is likely to have ripple effects on the wages and working conditions for health care workers around the region.

A key bargaining issue is staffing. Swedish has over 900 vacancies. This forces overtime on the rest of the workforce, adding stress and fatigue.

A safe ratio would be three to five patients per nurse, according to strikers I met. Instead, many nurses have to deal with seven to eight patients.

Management blames the national nursing shortage. But that doesn’t explain the non-nursing vacancies. And while the company claims it can’t find enough nurses to fill regular openings, somehow it found lots of scab nurses to fill in during the strike.

Workers say management is also cutting corners in other ways—generally using the cheapest materials available, according to a striking materials handler. Workers told me that Swedish installed cheaper urinals that are unsafe for patients, and used cheaper tubing that results in medical spills.

The union reports that while Swedish has grown—adding 10 percent more hospital beds since 2015—it has not increased its number of janitors at all. Meanwhile it has seen alarming levels of hospital-acquired infections.

“Swedish should be part of the community,” said a worker who does the set-up for surgery. “People in this neighborhood should be able to come here and feel good about getting decent care. They can’t now.”

Swedish and Providence are legally nonprofit. But in health care, nonprofit status is often a legal fiction. It doesn’t stop the corporation from taking in more revenue than it spends in expenses in a given year.

Swedish been accumulating $1 billion per year for the last several years. Now it has $11 billion in reserves. Like other hospitals, it’s aiming at further expansion. Its excess revenue comes from underpaying workers and cutting corners.

One place the corporation isn’t skimping is executive salaries. The CEO of Swedish makes more than $15 million per year! Several senior executives take in more than $1 million each.

Besides staffing and safety, workers are concerned about preserving their benefits and getting a decent raise.

The union has a proposed a 23 percent increase over five years. With the high and rising cost of living in the Seattle area, this demand is very reasonable. Swedish countered by offering only half that.

“They think anybody can do these jobs,” a materials handler told me. “But every job takes a lot of skill! It takes time to learn these jobs. I am not an ant.”

The first day of the strike, picket lines at the First Hill and Cherry Hill campuses were massive—hundreds each. At Cherry Hill, there weren’t even enough picket signs for all the picketers.

Strikers chanted “I don’t know what you’ve been told, but Swedish workers will not fold!” Cars passing by continuously honked their support, and many community members stopped by to join the picketing.

The next day, thousands marched downtown for a rally with solidarity contingents from many other Seattle unions. “My unit became a revolving door,” said a nurse who spoke at the rally. “We are consistently understaffed. We work four hours of overtime after a 12-hour shift!” Solidarity messages came in from as far away as Northern Ireland from UNISON.

The strike ended this morning at 7:30 a.m. Workers accompanied by supporters attempted to return to work together.

However, some workers knew they might not be allowed to return until Sunday. Management had signed an $11 million agreement with a scab-herding company for five days, rather than the three days of the strike.

Making such a deal, and locking workers out for two extra days, is a common management tactic to punish and discourage workers in short-term health care strikes.

Next, it’s back to bargaining. If management doesn’t engage in good faith, the union may have to go on strike again.

Steve Leigh is a member of the retiree chapter of SEIU Local 925.

Related
'If Your House Is On Fire You Run': Workers Strike for Safety At Understaffed Mental Health Center »
Global Cleaning Workers Share Their Struggles as the First Line of Pandemic Defense »
'Nurses Over Billboards': Two-Day Strike Hits Site of New York's First COVID Outbreak »
Will Urgent Care Doctors Be Forced to Strike in a Pandemic for the Right to Go Home? »
Chicago Health Care Workers on Strike for Safe Staffing, $15 Minimum, PPE »