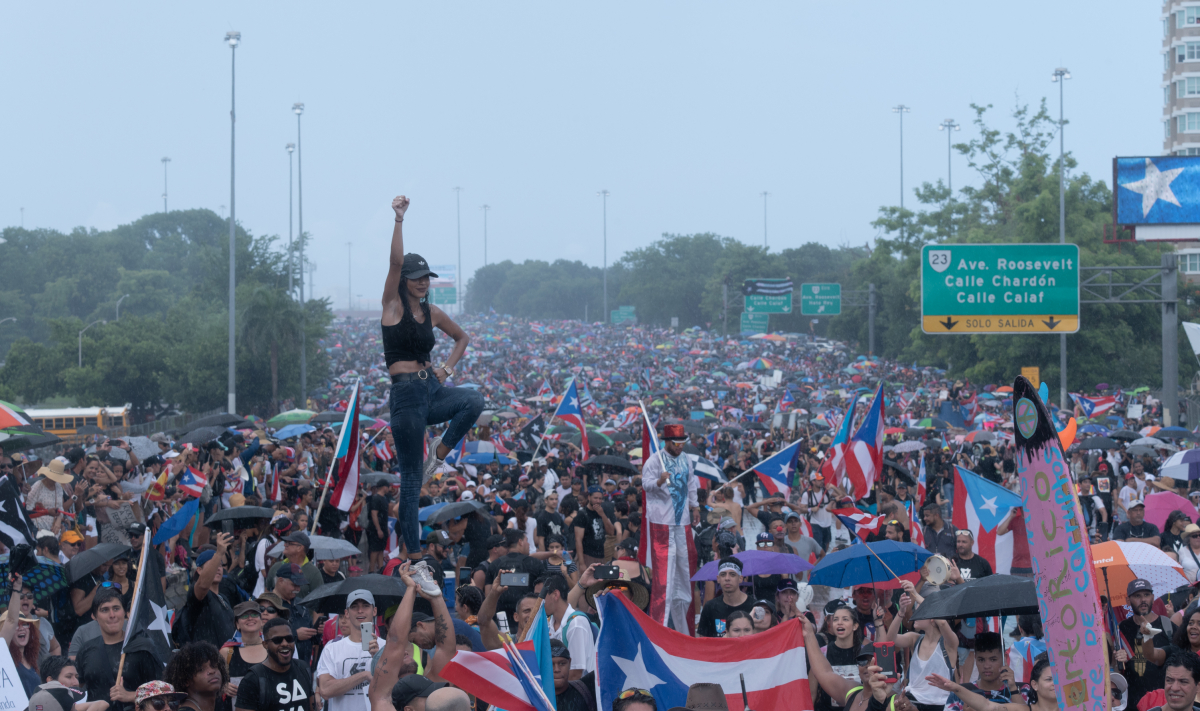 Teachers laid the groundwork for the uprising with their battles against the dictatorial Fiscal Oversight and Management Board. They stopped charter schools and fought off a pension attack. Photo: Armando Diaz (CC BY NC-NO 2.0)

In the two months leading up to the uprising which ousted Puerto Rican Governor Ricardo Roselló, educators celebrated hard-fought victories against the privatization of their education system. Struggles by teachers and families against school closures and charter schools helped pave the way for July’s unprecedented outpouring of protest (see box).

By the end of the school year in June, it became clear that the struggle to stop charterization had largely won. There is only one actively functional charter school on the island.

Puerto Rico has seen repeated demonstrations of hundreds of thousands of people since July 13, when then-Governor Ricardo Rosseló’s ugly chats with his inner circle were revealed. The mass street protests toppled his government in just two weeks.

Demonstrators shut down a highway and called a general strike demanding the governor’s resignation.

Besides hatred for women, homophobia, and contempt for those killed by Hurricane Maria, the chats revealed the elite’s sharing of confidential government information with lobbyists.

And earlier that week, the island’s former Secretaries of Education and the Health Insurance Administration were arrested by the FBI on charges of corruption and fraud.

On July 24 Rosselló announced his resignation. Two more governors were successively sworn in within a week—the first forced out by the unconstitutionality of his appointment and more protests.

But the people’s anger was not just about the chats, the corruption, or the government’s incredibly inadequate response to Hurricane Maria.

The U.S. Congress in 2016 handed dictatorial powers in Puerto Rico to an unelected Fiscal Oversight and Management Board in the name of debt restructuring. This board has pushed massive cuts to public education and to the University of Puerto Rico, cuts to pensions, and a drive to privatize public services, including the electric utility.

One chant this summer went: “Ricky, renuncia! Y llévate la Junta!” (“Ricky, resign—and take the Board with you!”)

So the demand for the governors to resign came from unions, feminist groups, students, members of all political parties, businesspeople—even a police association. Everyone agrees that the outpouring of organizing and protest is not over yet.

Then in July, teachers and families who had fought pitched battles against the closing of 442 public schools by ex-Secretary of Education Julia Keleher were vindicated when Keleher was arrested on corruption charges.

As the new school year starts in August, educators are still fighting to fully fund and staff the schools, reopen those shuttered under Keleher, and keep the charters out. In the weeks and months to come, expect educators to keep playing a critical role in the struggle for democracy, against austerity, and for the dignity of the working class in Puerto Rico.

One of the least known but most critical struggles to keep an eye on in coming months is the fight to save educators’ pensions.

Public workers are under tremendous pressure to tighten their belts in order to ensure repayment of $74 billion in illegitimate debt that the government owes to bondholders.

The debt crisis was created by an economic slump that has lasted since 2006, causing the government to take out loans to operate. These loans were bought up by hedge-fund vultures whose goals are to make huge profits while forcing the government to cut back services to the working people of Puerto Rico.

But as Hurricane Maria and this summer’s uprising have revealed to the world, Puerto Rican workers simply can’t stand to suffer for the rich anymore.

In June, rank-and-file educators in Puerto Rico came together in an incredible movement of solidarity and self-organization to defeat a proposal that would have gutted the retirements of thousands of educators.

The last week of May, the Asociación de Maestros de Puerto Rico (AMPR), an affiliate of the American Federation of Teachers (AFT), unveiled a sweetheart deal negotiated directly with the Fiscal Oversight and Management Board. This federally imposed board, known locally as la Junta, acts like a dictatorship as it oversees the process of making workers pay for Puerto Rico’s odious debt.

The AFT spent $3 million in a year-long, closed-door negotiation that went over the heads of the elected government and behind the backs of the teachers. Its proposal would have canceled the pensions of thousands of current educators and replaced them with 401(k) retirement plans, reduced the pensions of current retirees by 8.5 percent, and raised the retirement age from 55 to 63. The deal also eliminated Christmas bonuses and would have required teachers to work on nationally recognized holidays.

But the Federación de Maestros de Puerto Rico (FMPR), a rival teachers union with a long history of class struggle, along with allies in the fight to save public education, waged a successful Vote No campaign that rejected the deal and unexpectedly stopped the Junta and the AMPR/AFT in their tracks.

The Vote No campaign was an uphill battle. AMPR/AFT spent hundreds of thousands of dollars on deceitful TV and radio campaign ads, portraying the agreement as a necessary compromise which would preserve pensions. Instead of putting polling places in schools or any other public space, the union rented private venues so it could allow its staff and their literature inside and keep out the opposition. AMPR/AFT even called the police in order to prevent neutral observers from entering the polling stations.

Despite these repressive measures, the FMPR mobilized crews to have a presence outside 96 percent of the polling places. With exit polls in hand, the Vote No campaigners helped ensure that the vote was proper and that the election couldn’t be stolen.

This has been a glorious summer, where hundreds of thousands of Puerto Ricans participated in the biggest general strike ever on the island. The strikes and demonstrations that brought down the Roselló regime were largely spontaneous and broadly democratic, but the seeds of the insurrection were planted by decades of struggle.

These struggles have been led by feminists who fought against gender violence and homophobia, muckraking journalists who uncovered the depths of government corruption, activists organizing for the debt to be dropped, community members building autonomous centers of self-organization, environmentalists who stopped a pipeline, students who went on strike to keep their universities public, artists who preserved and created culture, and unionists who refused to compromise away working people’s futures.

No one party, organization, or union called for the strike and demonstrations. Many groups contributed to their outbreak and political character.

If we can learn something from this victorious moment, it is that the road ahead lies in fighting back for the future and refusing to compromise.

In the labor movement, unions like the AMPR in Puerto Rico and the AFT in the U.S. have negotiated away our rights over and over, under the cover of accomplishing the possible and avoiding the greater evil. This approach allows our opponents to chip away little by little, until we find our public education in shambles, neighborhood schools closed, students’ lives turned upside down, and educators’ future sold out.

Our future depends on fighting for the “impossible,” against the whole logic of a system that will have workers pay with their lives.

WIND IN OUR SAILS

Today the fighters for the future of education in Puerto Rico have huge victories under our belts and the wind in our sails. We have brought down two corrupt governors and are working on our third. The protests, rallies, marches, art performances, and battles on the streets against police brutality complemented each other. It was a triumph for the Puerto Rican people.

While the government continues to flail in crisis, the people are organizing regional assemblies that are spreading and growing. We hope to see a new wave of demands emerge from these assemblies.

The FMPR will call for auditing the debt, reopening our schools, reversing anti-worker laws, revoking the privatization of public agencies, adding an anti-sexist curriculum in schools, and building the quality public education system that the people of Puerto Rico deserve.

The popular insurrection in Puerto Rico has proven once again that “when we fight, we can win.”

Mercedes Martinez is president of the FMPR. Monique Dols is an early childhood educator based in New York City.