Kentucky Miners Are Camped Out on Railroad Tracks, Blocking a Coal Train, Demanding Their Stolen Wages 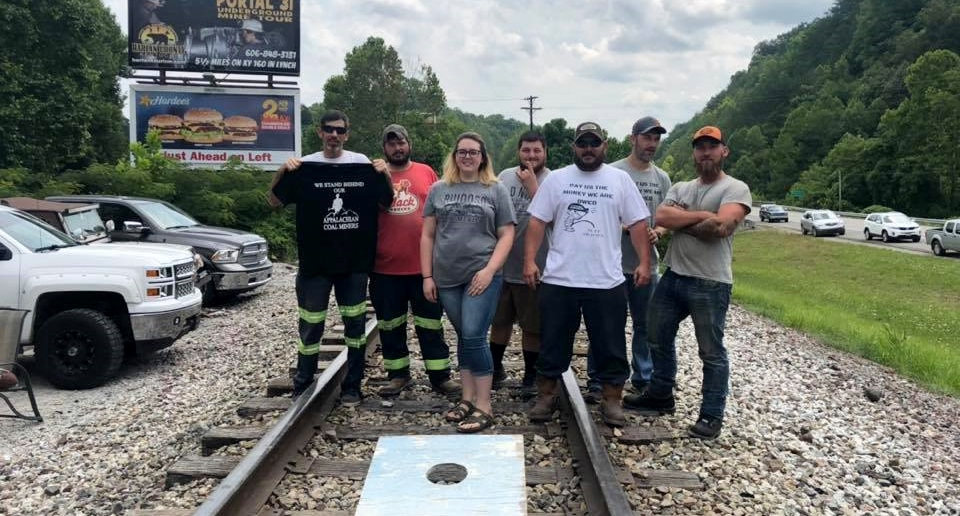 The miners want their jobs back, if possible—but bottom line, they want their wages for the work they already did. The local community has rallied to support them, bringing donations of food and water down to those camped out on the tracks. Photo: Megan Roark-Halcomb

Harlan County, Kentucky, is probably best known for the hard-fought strikes in its coal mines in the 1930s and 1970s. Today the remaining mines are nonunion. But evidently the local spirit of militancy and solidarity is still kicking.

For three days now, miners and their families have occupied a railroad track, blocking a train that’s loaded up with coal that these workers dug out of the earth and never got paid for.

Word spread quickly July 29 that someone was loading up the train to move. A few laid-off miners headed down to the site to find out what was going on, and it didn’t take long to decide they weren’t going to let this train go anywhere.

The miners want their jobs back, if possible—but bottom line, they want their wages for the work they already did.

“I would like to get the money that I’m owed,” said miner Cameron Cornett, a father of three, “the money that I worked for, and that was taken from me and my family and these other workers.”

“If we can’t get our money, they need to do something with [former CEO] Jeff Hoops for what he’s done,” said Shane Smith, a fourth-generation miner. His youngest daughter was born three days after the company announced its bankruptcy a month ago and stole workers’ wages.

Both men said they are owed nearly $4,000 in their last two paychecks.

Miners say the county police came by, asked everyone to stay off the tracks, said as long as the protests stayed civil there wouldn’t be any trouble—and departed.

Since then miners, their spouses, their kids, and their supporters have maintained a constant presence at the tracks. The numbers have fluctuated, with up to 100 people gathered at times, and a few stalwarts sticking it out through the nights.

To pass the time they’re playing cornhole and singing songs like “I Want My Pay” to the tune of “I Want It That Way.” Even rain last night didn’t dampen their spirits.

Blackjewel LLC abruptly shut down all its mines July 1 and filed for Chapter 11 bankruptcy. Partway through a shift, workers were told the bad news and sent home.

Cornett heard about it on Facebook, but showed up anyway for the night shift, “just to see.” He found no one there but a security guard.

The miners never got their last paycheck. Their second-to-last paycheck, already deposited, evaporated out of their bank accounts.

Smith’s baby girl was born July 4. Now his wife is out on maternity leave, and money is tight. He had to scrape up change for gas to drive to the protest.

“Everybody started pitching in and finding a way to get everybody to it,” he said.

Adding insult to injury, the miners never received any paper notice of their layoff, which caused a bureaucratic headache when they went to file for unemployment—they couldn’t prove they were out of work.

Even once that was straightened out, the company’s paperwork was a mess, said Cornett. Everyone’s case was slightly different. It turned out that Blackjewel hadn’t reported most of his wages to Social Security all year. He filed additional paperwork and expects to wait two to three more weeks for a reconsideration by the unemployment department.

Since Blackjewel shut down, he said, there are only two coal mines still operating in the area. Neither one is currently hiring.

The bankruptcy proceedings are still playing out in federal court. Unfortunately, federal bankruptcy law puts workers far down the list of who gets paid, after business creditors and legal fees for the bankruptcy itself. Nonetheless, miners hope some of the company’s assets will eventually be paid out to recoup them. In the meantime they’re trying to make ends meet day to day.

The local community has rallied behind the miners. Since the mines closed, neighbors and friends have been donating to help families pay their utility bills. Now people are bringing food and water down to the railroad tracks.

A local Chinese restaurant owner cooked up 20 boxes of food. Someone who runs a tanning salon made “Pay Us the Money We Are Owed” T-shirts with iridescent letters and a cartoon. By day three there were tents, Port-a-Potties, and a generator.

Local reporters broke the story and provide a steady stream of updates. On Twitter you can follow the latest from Sydney Boles @sydneyboles of a community radio station and Connor James @ConnorWYMT of a regional TV station. (This afternoon the rail company CSX reportedly sent workers to move out its train engines, but not the coal. The miners are discussing what to do.)

Now several national news outlets have picked up their story.

Besides the six mines in Harlan County, the bankruptcy hit Blackjewel’s mines in Virginia, West Virginia, and Wyoming, laying off 1,800 miners in all. The stiffed miners have been exchanging information and encouragement cross-country through a Facebook group.

On July 3 a federal bankruptcy judge denied Blackjewel the $20 million loan it would take to reopen the mines, but approved a $5 million loan for emergency expenses like security and firefighting, on the condition that Hoops resign. Hearings and negotiations continue, and the company is set to auction off some mines today.

Smith said a reporter managed to get hold of former CEO Hoops on the phone July 30. “I don’t know if he meant to answer the phone or not,” Smith said, “but he spoke a couple words to her. He said, ‘I’m just as broke as they are.’ We all know better than that.”

Days after the bankruptcy Hoops wrote to employees, “No one is hurting more than me.” In a follow-up text message to the Gillette News-Record he complained of receiving threats even though he had “paid a private plane at a cost of $16,000 out of my pocket” to deliver Wyoming miners their checks.

The mismanagement is shocking. A nonprofit public-interest research firm called the Sightline Institute pored over Blackjewel’s bankruptcy filing and reported that Hoops specialized in taking over financially struggling mines, that his companies were chronically short on cash and routinely stiffed creditors and tax collectors, that he had no way of tracking the finances of individual mines, and that he repeatedly transferred money back and forth between the company and his personal account, apparently to keep checks from bouncing.

Hoops is also building a $30 million Roman Coliseum-themed resort called “The Grand Patrician” on the site of an abandoned hospital in West Virginia.

The workers are hoping that media coverage of their action will draw the attention of someone who can help them.

“Several people are talking about President Trump, hoping he would get involved in some way, or anybody with federal power,” Cornett said. “Our state rep and attorney general have been out and spoken with us, but there’s only so much they can do on a state level.”