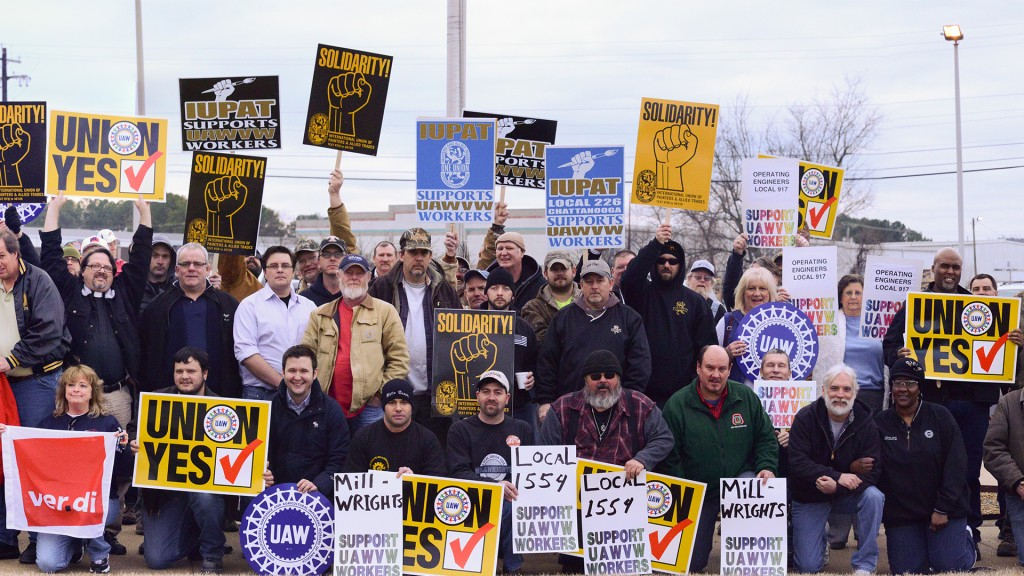 Chattanooga unions showed their support for the organizing drive at the plant in 2014. After a narrow loss five years ago, the union is trying again. An election has been scheduled for June 12-14. Photo: UAW

The new head of Volkswagen’s Chattanooga plant led two all-plant captive-audience meetings on Tuesday, a day before the National Labor Relations Board announced it has scheduled a union election.

Labor Notes has obtained audio of the speeches by CEO Frank Fischer. Both times he insinuated that the United Auto Workers were to blame for the closure of Volkswagen’s plant in Westmoreland, Pennsylvania, in 1988.

The Westmoreland factory was the first auto plant in the United States owned by a major foreign-owned company. It produced variations of Volkswagen’s Golf, including the compact Volkswagen Rabbit. The Chattanooga factory is Volkswagen’s first in the U.S. since it closed the Westmoreland plant.

“Start of production was in April ’78 and the first strike happened already in October,” Fischer told the night shift. “In the end Volkswagen took the consequences and had to close the factory.”

Captive-audience meeting is the union term for a common union-busting tactic where workers are required to attend a meeting and sit through management’s threats and promises. Union organizers are not allowed on the property and have no right to equal time with workers.

Labor Notes previously obtained a recording of another captive-audience meeting in the plant, led by Tennessee Governor Bill Lee. All day-shift workers were required to attend the meeting, which was held on April 29, the date that the UAW had originally petitioned the Labor Board to hold the election.

“Even when subtle, the captive meeting gets across the basic point,” said John Logan, a labor history professor at San Francisco State University and scholar on employer opposition to union campaigns. The point, he said, is this: “The person who controls my career wants me to have nothing to do with the union.”

Fischer’s comments reinforce insinuations made by Volkswagen supervisors earlier this month, when they handed out flyers with a list of plant closures they attributed to the UAW.

Blaming plant closures on the UAW has also been a central theme of the anti-union campaign by several business-backed astroturf organizations that have involved themselves in the Chattanooga election.

Last week the company announced that it was replacing the unpopular Chattanooga CEO Antonio Pinto with Fischer, who previously held the position from 2008 to 2014 and is well respected by many workers, including union activists.

The company has denied that Fischer’s appointment is connected to the upcoming union election.

Fischer was introduced in both speeches by Jeffrey Irvine, a supervisor in the body shop who was in the first cohort of hourly workers hired into the plant.

“He comes back because he cares about this plant,” Irvine told the day shift. “Frank Fischer cares.”

Many employees on the day shift greeted Fischer with a standing ovation.

Both speeches featured the same promises and threats from Fischer. He acknowledged that morale has been declining over the years and promised to make swift changes, including sprucing up the shop floor bathrooms and ending the practice of springing mandatory overtime on workers at the last moment.

Shuffling out an unpopular boss and promising to fix problems are standard moves to quash a union drive. But the “Mr. Nice Guy” approach can backfire if pro-union workers get the word around that these sudden improvements represent their first union victories.

It’s proof that organizing gives workers power. If just threatening to unionize was enough to make Volkswagen finally address issues it ignored for years, imagine the results workers could get by actually unionizing and forcing the company to the bargaining table.

Fischer also suggested that the UAW was to blame for the unpopularity of the Volkswagen Rabbit and the closure of the Westmoreland plant.

“I understand there were a lot of confrontational issues in that plant, maybe leading to a number of quality problems, because the Rabbit never, ever had a good quality reputation,” Fischer said. “Volkswagen management never was able to really run the plant until it was closed in 1988.”

But the CEO’s comments are starkly at odds with a statement by the company’s own public relations manager, Chester Bahn, at the time the plant closed. In a 1988 letter to the editor in the Pittsburgh Post-Gazette, Bahn responded to claims that the union was to blame for the plant’s closing: “Nothing could be further from the truth.”

“Volkswagen Westmoreland has not lost a single hour due to any internal labor-management difference since March 1981. That’s more than seven years ago,” Bahn wrote. “A hot spot of labor-management problems? Not at all.”

Instead, Bahn blamed overcapacity and falling demand. The plant, he wrote, “is designed to produce upwards of 240,000 vehicles a year while the present car market calls for only about a third of that number.”

Fischer ended his speeches by responding to a sudden flood of ads attacking the company for the 2015 Dieselgate scandal. He linked the ads to the confrontational environment he alleges led to the closing of the Westmoreland plant.

Employees at the Chattanooga Volkswagen plant received text messages on May 13 from someone they didn’t know that said “You may want to check this out -- www.vwfacts.org. This is news to me.”

All the pro-union workers I've spoken to found these mysterious text messages and phone calls counterproductive.

Who’s behind this new Center for VW Facts? No one will say. It’s founded by Joe DiSano, a Michigan-based Democratic Party political operative. DiSano declined to disclose his funding sources, and the UAW denied involvement with the group.

DiSano’s group has repeatedly slammed Volkswagen in news editorials, radio ads, and videos for the company’s diesel emissions scandal. In 2015, the company was found to have installed cheat devices on 11 million “clean diesel” vehicles, allowing the autos to pass emissions tests despite pumping out illegal levels of toxins into the atmosphere.

The group’s name is a nod to the Center for Union Facts, a business-financed anti-union group which launched an anti-UAW campaign in April, focused on the Chrysler training center corruption scandal that has rocked the union’s upper leadership. The Center for Union Facts has created a website, written editorials, purchased newspaper ads, and put up billboards near the Chattanooga plant.

“People that would attack Volkswagen, they attack each of us,” Fischer told the day shift. “They hurt our brand, in the end they also hurt our sales. This happened also at Westmoreland and it is not supposed to happen again [in] Chattanooga.”

A few days prior to this meeting, Southern Momentum, an anti-union group funded by local business interests, published nine videos of anti-union Volkswagen employees. Each video ended with the worker saying a variation of the same phrase Fischer would use: “I am Volkswagen, and when you attack the company, you attack me.”

The videos are being spread through paid promotions on Facebook. Meanwhile VW management has been handing out cards with bar codes that direct workers to the company’s own anti-union website.

Following in his predecessor’s footsteps, current Governor Lee’s office has also been secretly supporting the Volkswagen’s efforts to smash the union drive, as I reported this week at The Intercept.