Getting a Fair Contract Vote

With UPS Teamsters steaming after their union brass declared a contract ratified despite a 54 percent vote to reject it, we thought this was a good time to reprint this excerpt from the Labor Notes book Democracy Is Power about common obstacles to a democratic vote, and how to do it right. –Editors

Contract ratification directly determines how the union fulfills its purpose: power on the job. A local that denies members the right to ratify or that doesn’t protect the legitimacy of ratification votes is guaranteed to have an undemocratic culture. The UFCW constitution, for example, allows local executive boards to sign contracts that have been voted down if a strike was not also approved by at least two-thirds.

In most unions members do have the right to ratify, but often they face ratification practices that frustrate their right to a real choice. 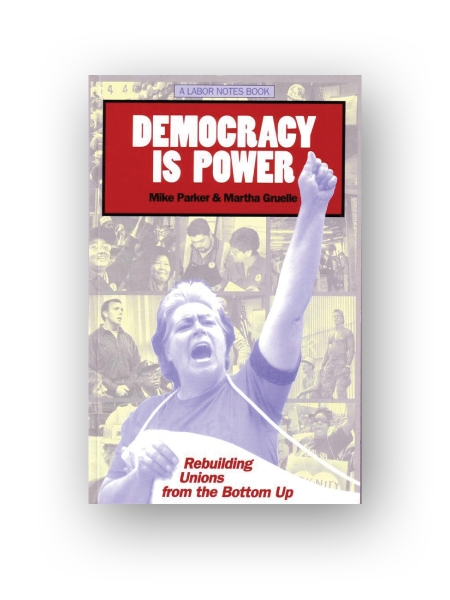 Democracy Is Power, by Martha Gruelle and Mike Parker, $10.

The right to vote on contracts is most often undermined when members can’t make an informed decision. They need accurate contract language, the opportunity for alternative leaders to analyze the proposal, time to discuss the likely implications, and time to perhaps campaign among co-workers for a “no” vote. In most unions all are short-circuited.

In many cases members never get to see the full contract, only a summary version, usually with the most positive spin and even dubbed “Highlights.” Are there really never any “lowlights” that the members should know about? Few unions allow, let alone encourage, minority reports from the bargaining committee, which would help members quickly focus on the pros and cons. The California State Employees Association, SEIU 1000, even brought charges against a bargaining committee member who campaigned against an agreement the top leaders supported. These leaders had promised the employer that all union officials would support the contract, and felt that fulfilling this promise was more important than members’ right to hear alternative views.

Any serious critique of the contract requires reasonable time to study it, get expert assistance on technical questions, and communicate with others. Too short a time between bargaining and voting denies the right to organize a potential opposition.

In the past union officials used logistical arguments against making the full contract available to the members in ample time. The contract is too long, it’s too expensive to get it out to everyone, and it would delay ratification. There was some truth to the argument. UAW-Big Three draft contracts, for example, can be over a thousand pages long, including benefits packages, riders, and supplements. On the other hand, the Teamsters International has found it worth the expense to mail copies of all tentative changes to national contracts, to each member covered, before ratification.

This is one area where technology aids democracy and overcomes most objections about cost or time delay. Within minutes of an agreement the draft documents can be posted on a website. Using the web, people can easily choose which portions they want to read or download. And the Internet and social media make it easy to circulate analysis and discussion.

Web distribution of material, though quite helpful, must be in addition to written versions. Relying totally on the web or smartphones would exclude members who aren’t as technically savvy or can’t afford regular Internet access. And the web can never replace personal interaction for organizing.

The Long History of the Two-Thirds Rule

Although a majority voted against the UPS master agreement, Teamsters leaders have declared the contract ratified. A constitutional provision allows the union to do this if less than half of eligible members vote and the contract is rejected by less than two-thirds of voters.—Eds.

The “two-thirds to reject” rule has a decades-long history in the Teamsters (IBT). Teamsters for a Democratic Union (TDU) was formed in 1976, and immediately launched a campaign to get rid of it.

In 1987, we won a big victory in partially ridding our union of “minority rule on contracts.” Prior to 1987, the two-thirds-to-reject was absolute: no matter how many Teamsters voted, it took two-thirds to reject a con- tract which the IBT leaders deemed a “final offer.” And old guard officials used it.

TDU sued over irregularities in that vote. Ron Carey, who in 1991 became the first Teamsters president elected by direct membership vote, sued also. In 1987, the IBT leadership, with the RICO racketeering lawsuit brewing, knew that we were near to winning the right to vote for IBT leaders. Under pressure, they settled up and changed the two-thirds rule.

We won the partial eradication of minority rule. But, like many victories, it was not a total win. Part of the rotten rule still exists: if fewer than half of members participate in the vote.

We won other contract rights for all Teamsters. In 1984, in the Bauman v. Presser case, TDU won an injunction and forced the UPS contract ballots to be impounded, and a new vote was held. IBT President Jackie Presser tried to conduct a “quickie” contract vote, with no time for members to meet, discuss, and distribute leaflets on the contract. That’s how we now get a reasonable period to consider contracts.

Ken Paff is the national organizer for TDU.

Leaders’ report on the tentative agreement is a real test of the democratic culture in the union and the degree of trust between leaders and members. Forget snow jobs. Bargainers need to come to the members with the truth about the contract, losses as well as gains, and particularly the areas where language is ambiguous and will require membership action to properly enforce. It’s up to the members to balance these downsides against the costs of continuing without a contract and maybe going on strike. Of course a real leader will make a recommendation, not try to duck trouble. If it’s not a great contract but officers think a strike is too risky, they should say so, and why. Telling members only that they should “vote their conscience” is a cop out.

First are the physical conditions. Are the times and voting places accessible to members? Are ballots counted fairly? At a Honeywell plant in Minneapolis, the lights went out during a vote on whether to end a strike. When a return to work passed by eight votes out of 2,040, many members doubted the vote’s validity.

Even more important are the political conditions. Does voting on the contract matter? Many unions use practices that make the vote next to meaningless because they slant so heavily in favor of ratification:

“You will vote until you get it right.” Leaders sometimes make it clear that if members turn the offer down they will get nothing better. They may go through the motions of bargaining and resubmit the same contract several times with cosmetic changes until a ratification vote succeeds. They realize they can’t get improvements by themselves, and they’re not willing to bring membership pressure to bear beyond the bargaining table.

"If you turn it down you must go on strike.” By making a contract ratification vote serve as a strike vote—either vote yes and work, or vote no and strike— officers may hope to frighten members into ratification. This tactic is especially effective where there has been no contract campaign or any involvement that would prepare members to strike and win. In truth, voting “no” and striking are two separate issues. A strike is often not the best strategic response to a failed contract bargaining. A better one may be to escalate the contract campaign on the inside while continuing to bargain.

“Settle now because the signing bonus is a one-time offer.” A number of companies and unions now use the signing bonus as a way to try to stampede members into quick ratification. This is a terrible practice for democratic unionism because it is designed to keep members from carefully considering the contract's long-term impact.

Bonuses are worth much less than the same dollar wage increase. They have to be renegotiated each time, whereas a wage increase tends to raise the floor for the next round of bargaining. Bonuses also add no value to the multitude of benefits calculated from the basic wages (overtime, holiday pay, and in many cases pensions). Leaders who have negotiated a signing bonus will often foster the illusion about one-time opportunity. In most cases, if the company really wants a settlement the money will be there.

“It is impossible to defeat.” Tight control of information combined with mobilization of the union staff and appointees to campaign for the contract make it difficult to generate an opposition. A high-pressure sales job gives the sense that ratification is not really debatable.

“The fight is over—we may as well accept it and get on with our lives.” This sentiment usually prevails when the vote does not take place until, say, a week after members have gone back to work after a strike and everything has returned to normal. On the one hand, few people want to maintain a strike needlessly when the issues appear to be settled, and this method has the advantage of giving members plenty of time to study and debate the contract. Yet it can take the wind out of any mobilization and make acceptance seem a done deal.

The answer lies in continuing the mobilization. The union may decide strategically that members should return to work while waiting for the ratification vote, but make clear to management that members still have the say and are still mobilized for action if they turn the contract down. In a good contract campaign, the members are mobilized and active well before the expiration date, while they’re still on the job. They can maintain a similar level of activity after a tentative agreement has been reached, with the focus now on getting out information and debating the proposal. The union can refuse to sanction overtime, for example, or any other effort that might help the company undermine the union if bargaining resumes.

This article is excerpted from Democracy Is Power: Rebuilding Unions from the Bottom Up, first published by Labor Notes in 1999. We still consider this book the best overview of what Labor Notes stands for. Buy it for the sale price of $10 at labornotes.org/store.

Find a sample resolution for amending local bylaws to include the right to an informed vote on page 91 of Democracy Is Power, or email dan[at]labornotes[dot]org for a copy.

A version of this article appeared in Labor Notes #476. Don't miss an issue, subscribe today.
Related
UFCW Reformers Look to 2023 »
Ballots Are Out in UAW Election, with Contrasting Visions of Unionism Up for Leadership »
Rank-and-File Power Is Essential to Rebuilding the Labor Movement »
UPS Says No to Air Conditioning, But Here’s a Surveillance Camera »
Auto Workers Turn a Corner for Strike Pay and Democracy »